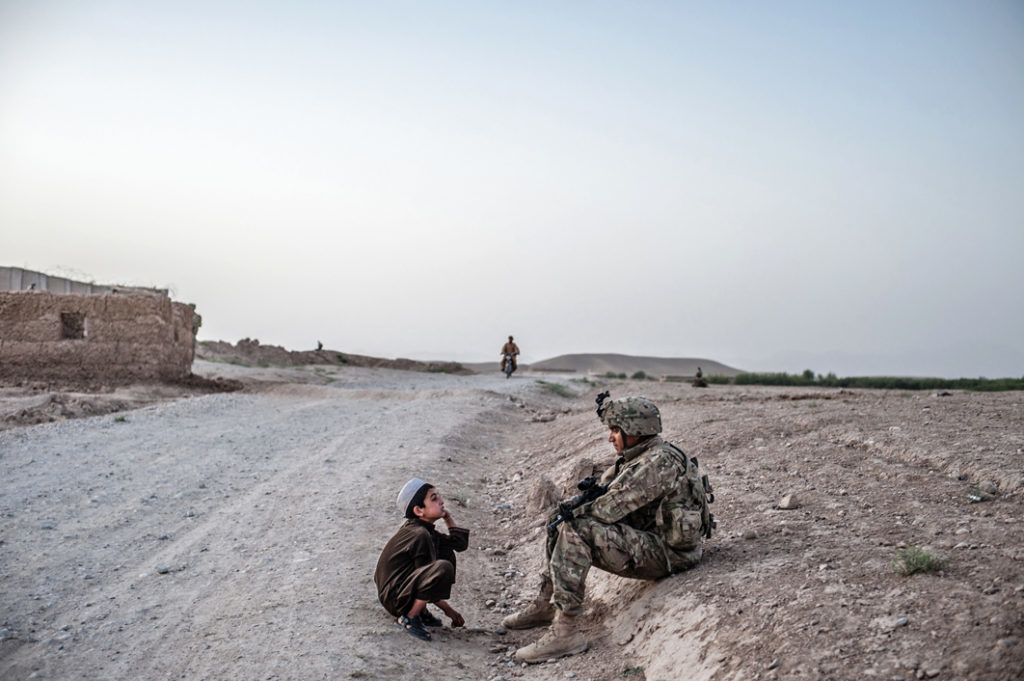 An Afghan boy and U.S. soldier consider each other as a motorcyclist barrels down the road towards them. (Photo by Ben Brody)

Kabul plunged back into violence when gunmen opened fire at a ceremony earlier today, killing dozens of people and dashing any lingering hope that an agreement signed last Saturday between the United States and the Taliban would soon pave a path to peace.

A video of the moment the shooting started offers a glimpse of the chaos and the carnage at the ceremony which was attended by opposition leader Abdullah Abdullah. He was reportedly unharmed, but 32 were confirmed killed, and dozens more severely wounded.

While much of the media coverage in the past week has focused on the the Taliban’s renewed attacks against the Afghan government and the potential for the end to the U.S. presence in the country, this shooting offers a glimpse into the state of the Afghan government amidst questions about a post-U.S. Afghanistan.

President Ashraf Ghani condemned the attack, calling it “a crime against humanity.” He also said he had telephoned Abdullah, his longtime political rival who has bitterly contested last month’s Electoral Commission announcement that declared Ghani the winner of September’s presidential election.

It is not clear who is responsible. The Taliban has denied involvement, and ISIS in Afghanistan has claimed responsibility, as it often does amid deadly attacks, but has yet to offer proof.

Even before the shooting – the deadliest since the peace deal – political tensions in Afghanistan were already running high. Abdullah challenged the results of the recent election that offered Ghani another five-year term in office. Citing election fraud, Abdullah rejected the results and also declared victory, putting the process in question. A political collision was on the horizon as preparations were underway for two parallel inaugurations in the Afghan capital. Washington convinced the two leaders to postpone that plan until last Saturday’s signing of the agreement – an agreement that excludes the U.S.-backed Afghan government, even while it promises the release of thousands of Taliban fighters imprisoned by that government.

The way forward is unclear and feels strewn with potential landmines for deeper conflict. This week, the U.S. launched airstrikes against the Taliban in defense of the Kabul government’s forces.

And now it remains to be seen how the political deadlock will be resolved. And the fate of the agreement that U.S. and its NATO allies as well as the Taliban forces, which have fought a resistance to U.S. occupying troops, all hoped would carve a path through all the wreckage of 18 years of war and set the country on a path to peace. Even if a reduction in violence comes back into play, it will do little to shore up the instability of the Afghan government and the Taliban’s war of attrition.

What is clear at this point is that America’s longest war in history just got longer.

Editor’s Note: The GroundTruth Project’s founder Charles Sennott covered the U.S.-led war in Afghanistan for The Boston Globe since it began in the immediate aftermath of the attacks of September 11, 2001 and indeed Sennott’s reporting on Afghanistan and Al Qaeda goes back at least eight years before 9-11, when the first World Trade Center attack occurred in 1993.

Through much of America’s longest war, and really since the founding of GroundTruth in 2014, and before that for GlobalPost which Sennott co-founded in 2009, our team has offered continuing coverage. An expanded body of work by GroundTruth featuring written dispatches, photography, audio and video is curated under the banner “Foreverstan: The Road to Ending America’s Longest War.” The Special Report includes work by photographer Ben Brody and a series of short films by Beth Murphy which eventually became Murphy’s award-winning feature documentary titled What Tomorrow Brings.