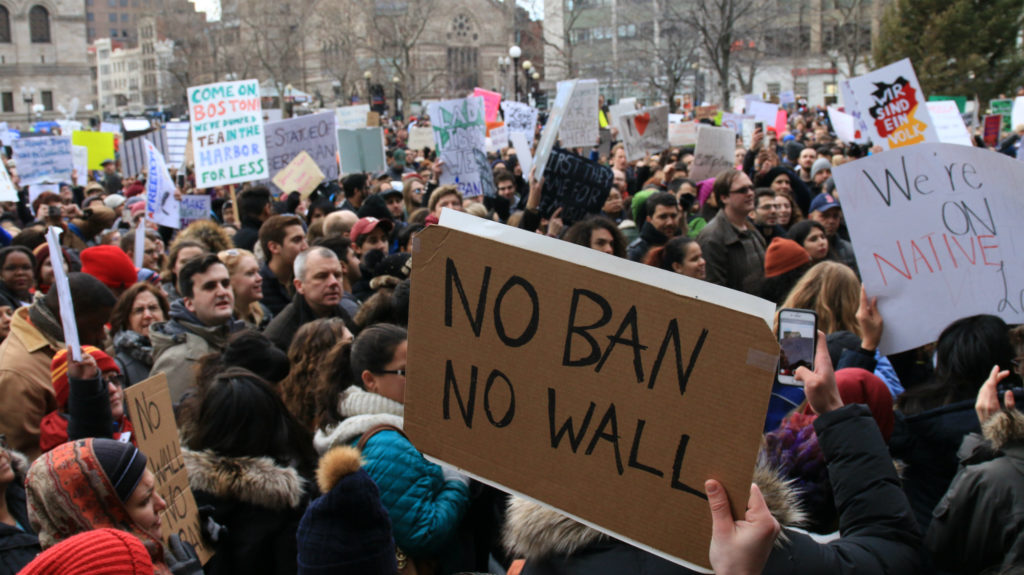 The debate on immigration has become extremely polarized. How do you write stories that say something new? Find people who've never been asked about their experiences. Pictured: protesters in Boston's Copley Square on Jan. 29, 2017, after President Donald Trump signed an executive order known as the "Muslim ban." (Photo by Giulia Afiune/GroundTruth)

Develop a relationship with reputable immigration attorneys, whom you can run questions by and whom you can turn to if you’re confused. These folks won’t necessarily be sources who are quoted in your story, but they can help ensure that you’re on the right track. As Cindy says, immigration law is extremely confusing and “it’s so easy to make mistakes.”

It’s important to talk to as many stakeholders as possible, and when you do, be sure not to let the most extreme voices become the main sources in your reporting. Which is to say, don’t just take activists’ word for it, ask an actual immigrant what he or she wants out of the system.

“Activists sometimes get so wrapped up in what they are doing, they tend to lose touch with what regular people want,” Cindy says.

For example, immigration rights activists usually want a pathway to full citizenship for immigrants, but many immigrants Cindy has spoken to just want to be able to work legally. They don’t even want to be citizens of the United States.

The same is true for activists who want to restrict immigration. Most Americans support some kind of compromise on immigration, and don’t want to deport folks who’ve lived productively in the United States for years.

Don’t just look up who other reporters have talked to and re-interview them. Don’t just rely on “community leaders” as representatives. Search for people who’ve never spoken to the media, who have a brand new story to tell, or a brand new perspective to share.

“The world is huge,” Anh says. “There are thousands of people waiting for us to find them.”

Show up, be persistent, be transparent

So how to find these brand new voices? You can’t report a good story about immigration unless you leave your desk. Both Anh and Cindy stress: take a walk.

Go to the community you want to cover, go to places people gather, and start asking questions. Always introduce yourself as a reporter, and be honest about your purpose. With the climate the way it is, it’s going to be harder to find people who’ll be willing to speak to you on the record. But that’s why you keep showing up — to show you’re invested in the community. Eventually, you’ll find someone who is willing to speak to you.

Once you do find someone willing to talk to you, you have to explain what the risks are, especially for people who are in the United States illegally. You want people making informed decisions knowing the risks. If they speak to you, and you use their full names, they will be exposed. Talk with your editor to make sure you’re on the same page about a possible approach, such as using a first name only, or a pseudonym.

Cindy says an immigration story that did really well was just a day in the life of an unaccompanied minor living in Los Angeles by himself. Cindy followed him as he went from high school to his job as a dishwasher, coming home at around 2 a.m. Then he’d wake up five hours later and do it all over again.

Cindy says she thinks the story did well because the words “immigrant” or “immigration” weren’t used when promoting it on social media, making people more interested in clicking on it. It was a universal story about hustling in L.A.

“This is an immigration story, but it was a story about a kid who happened to be an immigrant,” Cindy said. “A kid who was struggling to get by in L.A., like a lot of people. That really resonated.”