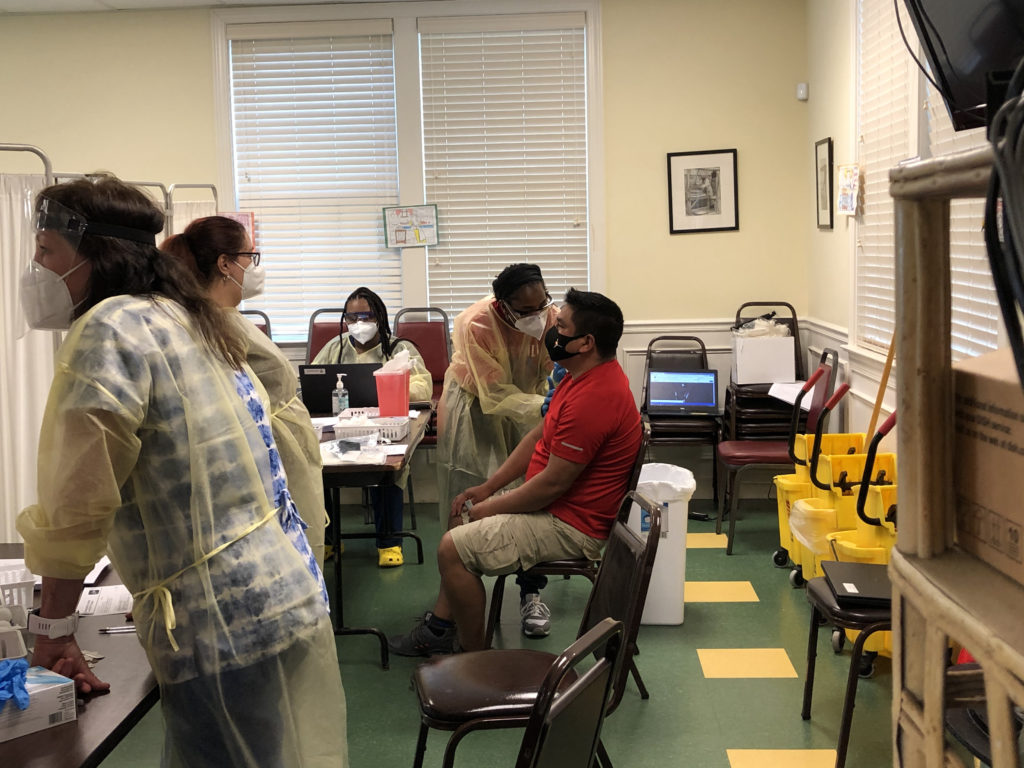 Alonso Medina Florigario, an H-2A worker who has been coming to the Lowcountry for six years, receives the COVID vaccine at the St. Helena Senior Center on March 31, 2021. (Photo by Kate Hidalgo Bellows/The Island Packet)

ST. HELENA ISLAND, S.C. — Mari Valentin stood with her back against the door, facing her team inside St. Helena Senior Center on March 31.

Donning face shields, KN95 masks and plastic gloves, an all-female team of nurses, volunteers and clinic leaders huddled together for a quick talk. Outside, dozens and dozens of farm workers stood in loose lines awaiting the shot that would allow them to travel freely from farm to farm, without having to worry about getting sick.

“Ready,” Valentin asked her team. As the director of Beaufort Jasper Hampton Comprehensive Health Services’ agricultural worker health program, she had been waiting for this day for more than a year, when the migrant and seasonal farm workers she cared for would receive the single-dose Janssen vaccine against severe COVID-19 illness.

Before the first worker received his vaccine — and a round of applause from his peers — Valentin announced that it was Cesar Chavez Day, the federal holiday that recognizes the birth and life of the labor activist who co-founded the organization that would become United Farm Workers.

“Cesar Chavez is to the farm workers what MLK was to the Civil Rights Movement,” she said. “He fought for the rights of farm workers in California … let’s just remember that.”

BJH, which provides affordable health care services to residents in the three Lowcountry counties, had already administered 3,500 COVID-19 vaccines to the general population. It was pure coincidence that they had scheduled their first vaccine clinic for farm workers on the holiday that celebrates their fight for better wages and living conditions.

But no matter the date, it would be a momentous occasion for the nearly 100 farm workers who would be vaccinated that day.

Every spring, a thousand farm workers from Mexico arrive in South Carolina’s Lowcountry region through the federal government’s H-2A visa program. Here, they tend to vast fields of cucumber, tomato, watermelon and other crops for six to eight months before returning home for the off-season. Valentin said there are also several hundred seasonal farm workers in the Lowcountry who live here permanently but just work the fields in the spring and summer.

Across the state and country, farm workers have continued working throughout the pandemic to keep the country fed. It’s high-risk work — the workers live, work and commute in close contact. Most are Latinos, a group that has been disproportionately impacted by the virus.

In early March, South Carolina Gov. Henry McMaster announced farm workers would be prioritized in the second phase of the COVID-19 vaccine rollout because of factors that put them at higher risk. The vaccine became available to all South Carolinians 16 and older March 31.

Last month, state health officials said they did not know how many farm workers have been infected with COVID-19 in South Carolina. In neighboring North Carolina, where the Department of Health and Human Services does track COVID-19 clusters at workplaces, meat processing plants and farms have seen major outbreaks.

Vaccination provides major relief from concerns about getting sick at work and having to take time off.

“This is longevity and sustainability for them,” said BJH director of business development Natassia Allen. “It’s liberating. They can move from camp to camp with their vaccination card.”

Standing in line that Wednesday afternoon, Marco Guerrero Figueroa, an H-2A worker, said he felt calm about receiving the vaccine, while Maria Flores, a housekeeper and the spouse of a seasonal farm worker, said she felt nervous. Yet both walked into the clinic, answered a slew of medical history questions, got the jab and emerged minutes later, card in hand.

“To be able to do this for them — it’s an honor,” said BJH chief of operations Gloria Warner.

Hours in, Mari Valentin’s energy had not diminished even slightly. Wearing a red t-shirt with big block lettering — “Together We Fight COVID-19 2020” — she floated around the clinic with a one-gallon jug of water, reminding her team to stay hydrated. Her phone rang constantly.

Valentin and other community health workers in the area had spent the last several months addressing local Latinos’ questions and concerns about the COVID-19 vaccine. She had worried the event would be a bust; but as the line grew, it became clear her fears would not materialize.

Fifteen years ago, Valentin, originally of Puerto Rico, quit her job as a teacher to become a coordinator for the agricultural worker health program. She took over as director two years ago.

She knows the names of all the workers and how long they have been working here. She knows the seasonal workers especially well; she taught some of their kids in school.

“I love my job, it’s so rewarding,” Valentin said. “Their struggles are so real.”

Spanish flowed into the building like water filling a dam. Valentin and other staff translated between farm workers and nurses administering the vaccine. Nurse practitioner Doreen Massey said that it was her first day on the job.

“I have been here for two hours,” Massey said between patients, her thick Long Island accent slipping through. But the last 28 years she spent in Georgia as an ER nurse and nurse practitioner. Most recently, she cared for COVID-19 patients in Athens.

“Obviously, COVID is a terrible thing that happened,” Massey said of the pandemic. “But I was glad to be part of [the fight against it].”

But for the night, she rested with the knowledge that this first event was a success.