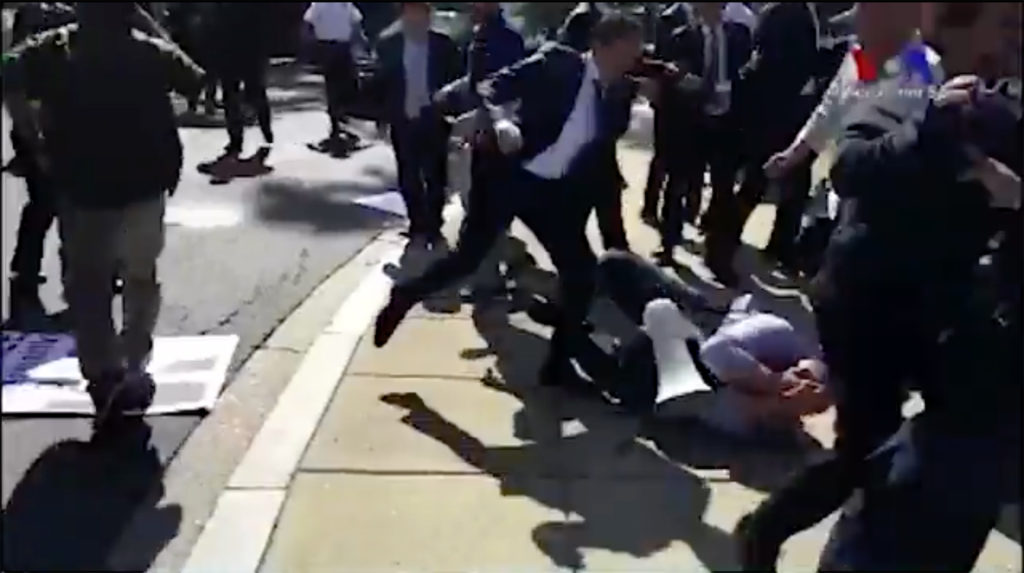 In this screenshot from a video posted on Twitter by VOA Turkish, a man can be seen kicking a protester on the ground.

Reporters in the Turkish and American press quickly identified the men as bodyguards of Turkish President Recep Erdogan, in town for a meeting with President Donald Trump. We later learned that Erdogan himself watched the bloody and chaotic scene from the backseat of a Mercedes parked outside the embassy.

Such an attack by foreign visitors on U.S. soil disturbed many who shared footage of the attack online, including a clip of 26-year-old student Ceren Borazan being choked from behind as one of the bodyguards swore that he would kill her. The images raised deep concerns about gross violation of American civil liberties — and that Erdogan felt entitled to do so.

“Kurdish-Americans brutally attacked by Erdogan’s security in D.C. U.S. must condemn. The right to protest is at the core of our Constitution!” wrote American University graduate student Samira Ghaderi on Twitter, using the hashtag #ArrestErdogansBodyguards.

Kurdish-Americans brutally attacked by Erdogan’s security in DC. U.S. must condemn. The right to protest is at the core of our Constitution! pic.twitter.com/T1wJoQaJQ6

It was a jarring end to a truly bizarre day in which a highly anticipated state visit between strongmen was overshadowed by Watergate-level allegations that Trump abused his power to try to quash an FBI investigation into former national security adviser Michael Flynn’s relationship with Russia and Turkey, which are allies.

But the unusual violence on Embassy Row, described by police chief Peter Newsham as “a brutal attack on peaceful protests” was not overshadowed for those concerned about heightened repression in Turkey — or those who see attacks on free assembly and free speech flourishing under the approving watch of autocrats around the world.

“Erdogan’s bodyguards beat up Kurdish protesters in D.C.,” tweeted Mahir Zeynalov, chief editor of The Globe Post. “Just imagine what we are going through back in Turkey.”

“The violent response of your security detail to peaceful protesters is wholly unacceptable,” they wrote, “and unfortunately reflective of your government’s treatment of the press, ethnic minority groups and political opponents.”

Indeed, the Turkish government’s attack on the press has been astonishing. Amnesty International reports that “at least 156 media outlets have been shut down and an estimated 2,500 journalists and other media workers have lost their jobs.” And since the failed coup attempt against Erdogan last July, his government has embarked on a massive campaign of retaliation. This has included the arrest of more than 110,000 people including judges, attorneys, professors and journalists, with charges filed against 50,000 of them, according to Turkey’s Ministry of Interior.

Nearly 140,000 employees have been fired, according to TurkeyPurge.com, which is tracking the aftermath. By most accounts, only a small fraction of those affected actually participated in the coup.

But collective punishment is familiar in Turkey, perhaps especially for Kurds. The nine Kurdish-American protesters taken to the hospital after sustaining injuries outside the embassy represent Turkey’s largest ethnic minority, one that has known a violent relationship with the Turkish government.

Turkey is presently fighting a war against Kurdish rebels in the country’s southeast, which has created a difficult political reality for allies, including the United States, who see the Kurds as critical to helping defeat ISIS. Ahead of Erdogan’s visit, Trump authorized arms shipments to the People’s Protection Units (YPG), which Erdogan and some Turks consider to be a terrorist organization.

That didn’t stop the two leaders from carrying on a warm relationship that many in both countries find disturbing. Trump immediately called to congratulate Erdogan after his successful referendum granting him greater presidential authority last month.

And at the White House on Tuesday, Erdogan congratulated Trump on his “legendary triumph,” to which Trump mouthed, “Thank you.”

The love fest is disconcerting in light of Turkey’s relentless attacks on hundreds of thousands of innocent people, including Americans. In one example, Turkish-American NASA scientist Serkan Golge has spent nearly a year in a Turkish prison, accused of conspiring with U.S.-based religious leader Fethullah Gulen, who allegedly masterminded the coup attempt. The only evidence against the 37-year-old scientist is a $1 bill.

“His family says Serkan sees the sun just one hour a day. The only way he can communicate with other inmates is shouting to nearby cells. He spends his days praying and counting his prayer-beads. He has lost 25 pounds in prison,” wrote GroundTruth reporters Lauren Bohn and Tugba Tekerek in The New York Times in March.

The U.S. State Department has raised the case with Turkish authorities, to no avail. A representative at State said the U.S. has no legal grounds to access him because he is a dual American and Turkish citizen.

As the relationship of mutual admiration develops between Trump and Erdogan — with FBI investigation of the Trump team continuing under new leadership — those who care about democratic freedoms will continue to worry and do what they can.