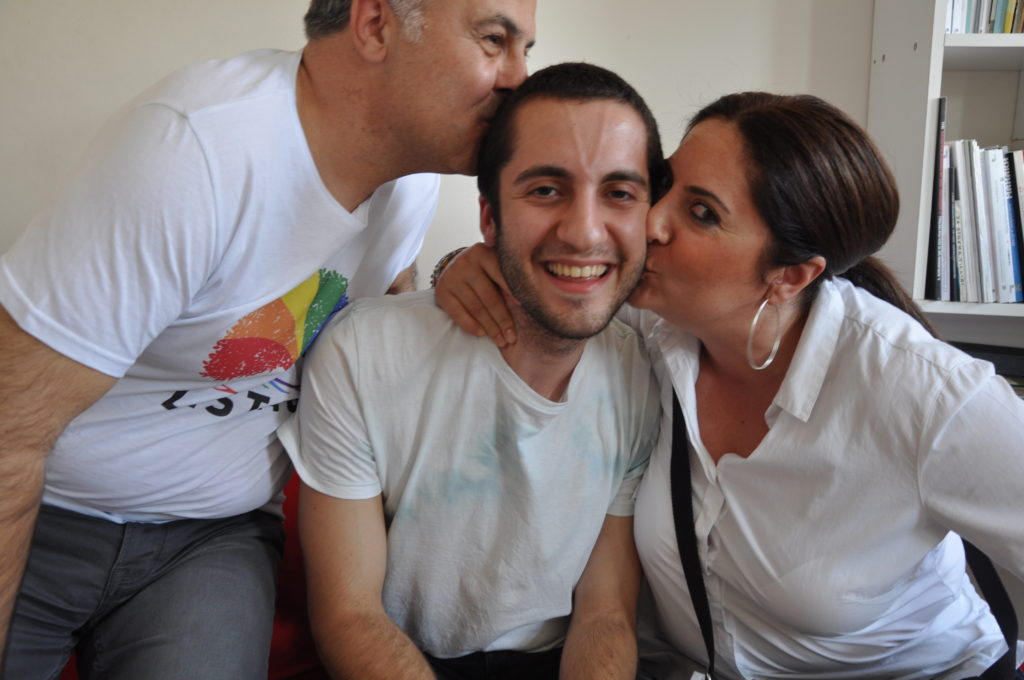 19-year-old Batu Kaya's parents kiss him before setting out for their first public LGBT gathering. Bohn/GroundTruth

This article was published in partnership with Mashable.

This year’s gay pride celebration in Istanbul was going to be a momentous one for 19-year-old Batu Kaya.

This would be the first time his parents, Arzu and Fahrettin, marched with him — an often elusive sign of acceptance in Turkey’s conservative society.

But soon after the family arrived in downtown Istanbul, police began firing water cannons, tear gas and rubber bullets to break up the march — the first time officials had sought to dismantle pride celebrations in Istanbul since they started taking place there in 2003.

It’s “the only day we’ve been able to own our sexuality in this country,” said Kaya, as he waited with his parents on a side street for the tear gas to subside. But after hours of waiting, he and his parents decided to go home.

“It was supposed to be a special day for my family, but they took it away from us.”

There were reports that police turned on the protesters when participants began chanting against Turkey’s conservative President Recep Tayyip Erdogan.

Organizers of the march released a statement, saying the Istanbul governor didn’t allow the march because it coincided with the Muslim holy month of Ramadan.

“The governorship put pressure on us to the cancel the parade just three hours before the parade took place, using Ramadan as an excuse,” wrote Sedef Cakmak, an activist, on Facebook. “This country well knows how dangerous it may be to perceive a group’s existence as disrespectful to religion. We will not let to turn back to those dark days. As we always say: “If pressure and violence are moral, we’re immoral.”

Last year, the 33-year-old Cakmak was elected as a city-council member of a large municipality in Istanbul, making her the first elected openly LGBT politician.

“Being a woman is hard enough in a masculine society like Turkey’s,” she says. “And I’m gay on top of it. It’s a double challenge to be yourself.”

Cakmak says there have been gains for the community, but that the country is still torn between conservatism and modernity. “I can see the struggle even in my relatively open-minded parents, in almost every person in society,” she says.

While she’s “out” to most of her friends and employees, she still doesn’t feel comfortable bringing her girlfriend of three years to work events. Her neighbors think they’re just best friends. And because the community is still fighting for basic anti-discrimination legislation to ensure protections, Cakmak says that other things — like having a child, an experience she desperately wants to share with her girlfriend — aren’t on the horizon.

“I’m just at the start of this journey,” she says. “Change won’t come easily. It will take time, but you have to keep hope.”

The dismantling of the parade comes on the heels of Turkey’s historic parliamentary election earlier this month in which the Islamic-rooted Justice and Development (AK) party, led by Erdogan, failed to secure enough votes for a single-party rule for the first time in 13 years.

Kaya and others see the crackdown on the march as an attempt by Erdogan to play to his socially conservative base. During a campaign rally recently, Erdogan sought to stoke divisions by calling homosexuals “representatives of sedition.”

Emir Coban, 24, said some of his friends were injured by police on Sunday.

“I am very sad…and I am very angry,” he said. “They don’t react to the ISIS violence in Syria but they attack the peaceful parade of LGBT people. We have neither stones nor sticks in our hands. Nothing.”

When Coban came out to his parents during high school, they took him to a hospital in Istanbul. Doctors said he was simply suffering from depression and that he was gay because of “childhood issues.” He was subjected to weekly therapy, anti-depressants and testosterone pills.

While Coban tried to resist the treatment, he routinely faced emotional and sometimes physical violence from his father, who would often forbid him from leaving the house. To this day, Coban’s family doesn’t fully accept him. In fact, he hasn’t talked to them in six years.

Still, he’s determined to forge a path ahead for himself and others.

“Life puts two paths in front of you: you either adapt to the way things are and bow your head or you refuse to adapt. If you refuse to adapt, you will struggle,” he said, wrapping a rainbow flag around his shoulders. “And if you struggle, you will not lead a comfortable life, but you will do it for the coming generation.”

“They say that it is Ramadan and also that Ramadan is the month of tolerance. But in practice they showed their homophobia. Damn your morality, damn your Ramadan!” said 22-year-old Husrev Orgun.

Orgun grew up in the central Anatolian region of Turkey listening to Zeki Muren, who became one of the country’s first gay icons. His aesthetic — heavy makeup, loud jewelry, and extravagant costumes –- often evoked comparisons to Liberace.

“I used to listen to his music and think that only me and Zeki Muren were gay,” said Orgun.

“I thought we were the only two gay people in Turkey.”

For Orgun, like many, the hardest part of ‘coming out’ was facing his family.

“The litmus test for how well a society accepts their LGBT community is how well people will accept their son and daughter as being gay,” he said.

Orgun came out to his mother when he was 15-years-old. She slapped him. And they didn’t talk for months. She took him to a hospital for psychological counseling but gradually came to understand this wasn’t a disease to be cured. She still doesn’t quite accept him, he says.

“My mother is still homophobic,” he says. “All of us, indeed, are homophobic.”

Unlike many other Muslim-majority countries, homosexuality is legal in Turkey. In Istanbul, there are several NGOs working for LGBT rights. In 2003, the pride march in Istanbul drew only 30 people. Last year, tens of thousands marched proudly through the streets.

But despite rising visibility, the community faces an uphill battle. Turkey currently has no law that explicitly prohibits discrimination on the grounds of sexual orientation or gender identity. AK party officials have denied proposals to advance rights, publicly stating that homosexuality is “an abnormality.”

The lack of legislative protection reflects a conservative society: A 2012 survey showed that a majority of the population supports the criminalization of homosexuality, with just 11 percent opposing. In the 2011 World Values Survey, 84 percent of Turks polled said that they did not want to live with LGBT neighbors.

“I am bewildered. Police have never attacked the parade,” said Zeynep Ozadikti, who goes by the name Esmeray. “The parade has been — and has been seen by the society as — our most legitimate right. It had been our most untouchable right…With the Ramadan argument, they are creating a picture as if gays are against the religion, which is of course not true.”

Esmeray is a 45-year-old Turkish actress and activist, who underwent gender reassignment surgery nearly two years ago. She realized she was a woman long ago, when she was a 9-year-old boy growing up in Turkey’s conservative northeast. She didn’t talk to her family about her identity until she was 24. It’s still a difficult reality for her mother, who refuses to have Esmeray at her own home for fear that neighbors will “find out.”

“Every time I see my mother, I put my head on her knees,” she says. “She pets my head and she cries. It affects her…and it affects me. She will never accept me. I live with that.”