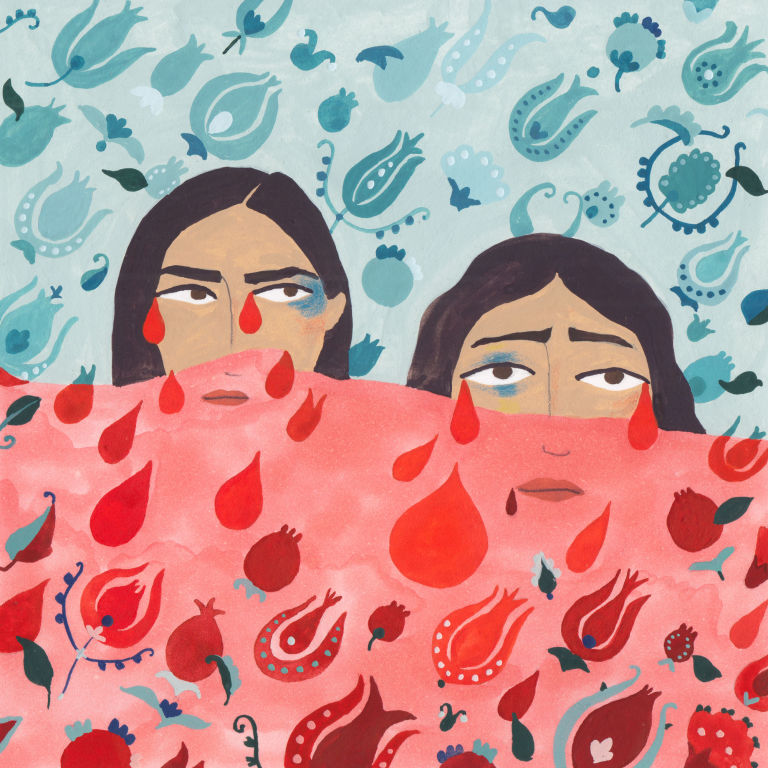 This article was originally published by the Lenny Letter and Elle Magazine.

Last week a faction of Turkey’s military tried to take over the country in a failed coup attempt. Noticeably absent from the torrent of coverage and political discourse are the country’s women — not surprising in a country that activists say has become increasingly patriarchal and misogynistic.

Despite Turkey’s emergence as a world leader, the country has a rocky record of female empowerment. It ranks 130th out of 145 countries in the World Economic Forum’s Global Gender Gap Report. That’s just slightly above Iran, Saudi Arabia, and Egypt. The labor force participation rate for women is only 33.6% — one of the lowest rates in Europe and the Middle East. Honor killings, in which women are murdered by family members for perceived damage to the family’s reputation, still occur in rural parts of the country.

Last summer 28-year-old Çilem Karabulut became a cause célèbre among Turkish women activists when she turned herself in to police after admitting she had killed her husband with a handgun. Karabulut insisted that she was defending herself. Her husband had allegedly beaten, drugged, and abused her. The prosecutor demanded a life sentence. In June, the court sentenced her to fifteen years behind bars.

“It shouldn’t only be women who do all of the dying here,” she told local press, claiming that she went to authorities several times with a black eye, but no one helped her. “It’s time for men to do some dying, too.”

Last year, the brutal murder of Özgecan Aslan, a 20-year-old student who was stabbed in a minibus in southern Turkey while resisting a rape attempt — her body burned and dismembered afterward — helped lift the silence around the treatment of women in the country. While crimes against women are widely underreported, it’s estimated that almost 300 women were killed last year, mostly at the hands of men. What’s more, around 40 percent of Turkish women have experienced domestic violence in their lifetimes.

It wasn’t always this way. Turkey gave women the right to vote in 1934, a decade before France and Italy did. By some reports, the country had the world’s first female combat pilot. While activists say Turkey has long been patriarchal, many focus the blame on current President Recep Tayyip Erdoğan and his Islamic-rooted AK Party for rolling back the status of women and moving what was once a distinctly secular country toward Islamic conservatism. Analysts predict that the failed coup attempt will only strengthen his autocratic grip on the country.

Shortly after Aslan’s murder, Erdoğan called violence against women the “bleeding wound” of the nation. But his detractors weren’t fazed. They pointed to a series of repressive practices and rhetoric that minimizes women’s rights. In 2012, Erdoğan announced that the AK Party would draft a law banning abortion completely. Following debate, the draft has been shelved, though the demeaning rhetoric continues, including a call for women to have at least three children each and an oft-referenced speech in which he declared that men and women aren’t equal.

“We only hear whispering of progress … not real words,” said Serap Güre Şenalp of the Women’s Employment and Labor Initiative. “And if there were real words, we wouldn’t hear them because we’re not at the table.”

Last February, the Istanbul Police Department established a new bureau for fighting domestic violence and appointed a 39-year-old female police officer, Kiymet Bilir Değerli, to head the post. Turkish police have long been criticized for failing to provide protection for women and focusing on family reconciliation rather than punishment. Activists point to the government’s 2011 decision to rename the Ministry of Women’s Issues to the Ministry of the Family as further proof of their minimized role and protection in society.

In order to interview Değerli for Lenny, my translator and I had to get a series of approvals from the police department and explain the intent of our story. Bureaucracy and suspicion toward the press are standard in Turkey; the country has one of the worst press-freedom records in the world. While she had been vocal in our off-the-record preinterview, Değerli relied on her male deputy, Yavuz Morgul, to do most of the talking once our discussion was for public attribution.

“He is more knowledgeable than me,” she explained when I asked her why he was fielding all our questions.

Morgul, who had previously been assigned to the homicide unit, explained that Turkey doesn’t have a specific issue with violence against women. It’s a global problem, he said, that is imported from the West.

“We are some of the most loving people in the world toward women,” he said. He offered an anecdote about a famous blind Turkish poet who knew his wife was cheating on him, but instead of confronting her, he left money in her shoes in case she needed any for the journey to her lover’s home.

“That’s how deeply Turks love,” he explained. “But Westernization has now brought us to the point of talking about violence against women … the West has unfortunately deteriorated the family unit and sexualized women.”

For survivors like 52-year-old Nazan Eroğlu, who found solace in Purple Roof, Turkey’s first domestic-violence shelter, the new police unit is mere window dressing, an extension of a retrograde Turkish government and society.

“When you first hear about it, you say, ‘Oh, what good news! Such a unit, and a woman as the head of it!’ Then you think for a moment. A woman with the mentality of the current government does not give me hope,” she says. “These steps are just for show.”

Aylin Nazliaka, an opposition-party parliamentarian who has thrown major muscle behind fighting domestic violence, remains skeptical as well. Two years ago, Nazliaka made local headlines when she launched a tirade during a session of parliament, lambasting the AK Party for failing to aggressively tackle domestic violence. She became so incensed that she threatened to throw one of her high-heeled shoes at her fellow deputies. The exchange birthed a Twitter hashtag: #geliyorterlik, or “My slipper is coming;” Turkish women posted it with pictures of shoes and rallied for equal rights.

“Turkey is facing a serious problem,” she said. “If leaders don’t acknowledge we have a crisis when it comes to the treatment of women, we will go increasingly backward.”

But here’s the rub: not many leaders seem to think there’s a problem. Influential national figures like Ismet Uçma, a founder and deputy of the ruling party, claim that violence against women is often exaggerated, if not exploited, by women’s organizations and the media.

“Some organizations give unnecessary encouragement for women to take police action,” he said, perched in an office strewed with religious texts. “Some women exaggerate minor issues. If abuse is once a month … if violence is not something like you had trauma and had to go to the hospital, then it’s not an issue to exaggerate. If it’s a minor slap, then things like that can be tolerated and shouldn’t be exposed.”

He abruptly stopped his explanation to ask a question of his own.

“Are you married?” he asked me.

“Yes,” I responded, forgoing an explanation of how I’m in an unmarried long-term relationship. I field this question regularly while reporting in Turkey and the Middle East from both men and women. Our not being married and not having children doesn’t culturally register, so I often just say I’m married as shorthand.

“Do you have children?” he snapped back. It’s another question I receive almost weekly.

When I told him we don’t, he issued a verdict.

“You’re selfish,” he said, echoing Erdoğan’s recent statements that women who reject motherhood are incomplete and deficient. “You’re focusing on your work and not your true calling.”

Soon, his stylish fifteen-year-old daughter walked into the office. I asked her if she agreed with her father’s assessment.

“No, you’re not selfish,” she said, slightly blushing. “You’re just contributing to the world in a different way.”

The two agreed to disagree, but not without Uçma getting the final word.

“She’s young and easily influenced by the West,” he said. “One day, she will understand.”

Back at the police department, the new domestic-violence task force was busy organizing security logistics for a large Islamic conference hosted by the city. Değerli says most of their daily tasks aren’t related to countering violence against women, but supporting other units — an acknowledgment that isn’t seen as problematic.

“There had been challenges previously in Turkey, but now, thanks to the government, women can stand on their feet and can be independent from men,” she explained.

“The media shouldn’t focus on the violence,” Morgul added. “They should focus on love.”

Değerli smiled and nodded her head in emphatic agreement. She then wished us well and said she hoped we would write nice things about her.

Meanwhile, Çilem Karabulut has begun her fifteen-year sentence for her husband’s death. She’s not as lucky as men who have openly admitted to killing their partners have been. In 2014, a 62-year-old man appeared on a TV dating show looking for a new wife and shocked the audience when he casually mentioned he’d murdered his former wife and a girlfriend. He was reportedly released twice from prison, both of his sentences shorter than the one handed down to Karabulut. Last year, an Istanbul court released a man who beat his wife to death after he had served just one year of his three-year sentence.

In a small town not far from where Karabulut claims she killed her husband in self-defense, a group of self-described feminist activists whom I met at an International Women’s Day rally last year in Istanbul said they had hoped to hold a rally for her, but life got in the way.

“I don’t think my mother and brother will think that’s a good idea … they’re looking for a husband for me,” a 24-year-old medical student explained, asking for her name to be withheld for fear her family would find out that she had participated in a demonstration. “Making noise on the streets won’t help them find me one … sometimes it is easier to compromise.”