Turbines in their backyard: How a wind farm disrupted life in a Brazilian town 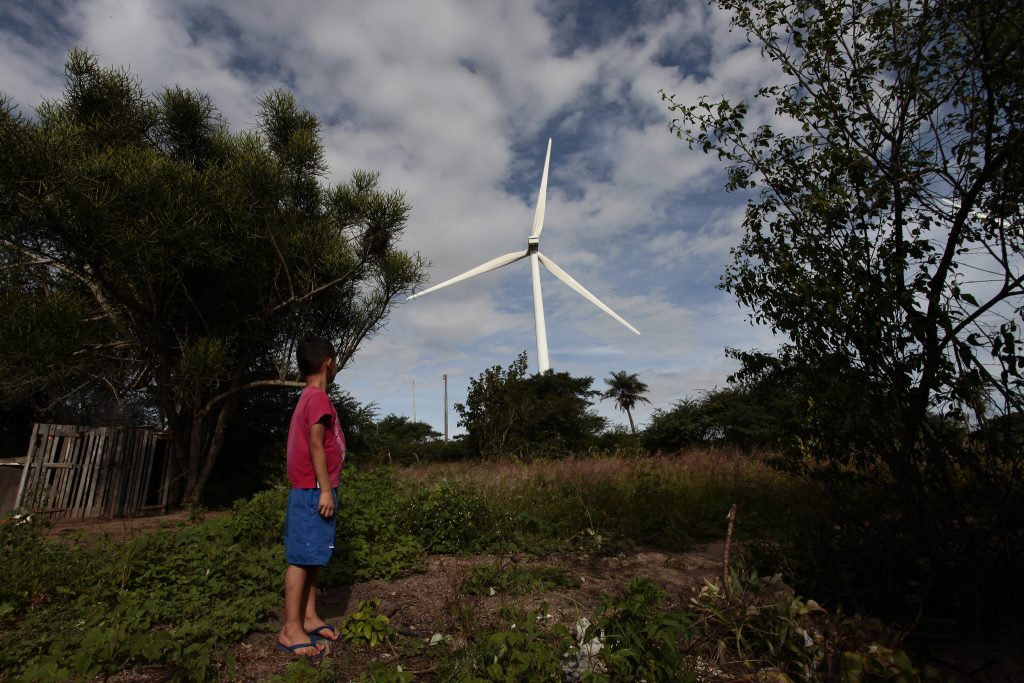 Read the original story in Portuguese

Imagine a noise similar to an airplane flying over your house at a low altitude. This is what residents of Sítio Sobradinho, a community of Caetés city, a rural area of Brazil’s Pernambuco state, hear all day. Since 2015, after Cubico Sustainable Investments, a British renewable energy company, built a wind farm in the area, the families living there have had their routines dramatically changed. The giant wind turbines’ constant noise is just one of their problems.

“We have suffered a lot because of the noise, which is too loud, and the dust as well,” says Roselma de Melo, a resident of Sítio Sobradinho. “They had to blow up some rocks to place the wind tower. As a result, many houses were cracked. Mine was one of them, and it is still like that today. We contacted those responsible for it, but they never solved our problem.”

With her house surrounded by wind turbines, Roselma fears that the structures may collapse and cause a serious accident. “Over time, the towers are wearing out, getting old, and no matter how much maintenance is done, the risk of them falling is high. Recently, the propeller of one of them fell right behind my house”, she recalls, showing the reporter a video with images of the accident.

Roselma has lived in the area for 13 years and is one of the few residents of this farming community who remained after the wind farm was built. Many families have sold their properties and left for other regions. She and others are planning to do the same. “We are now waiting for compensation so that we can live somewhere else. We have no other choice,” she said.

The proximity of the wind towers to Roselma’s house is surprising and frightening. The wind turbines are just 150 meters (about 500 feet) behind the property where she lives with her husband, their two children, and their in-laws. The constant noise of the engines is disturbing. According to her, at night the noise gets even louder.

The changes have also impacted the environment. Roselma noticed that “many animals” left the area since the wind farm started operating.” Before it was common to hear birds singing here, today this is rare. I think they got scared by the noise,” Roselma says.

Due to the noise from the wind turbines, conditions such as insomnia, anxiety, depression, and hearing loss have become common among Sítio Sobradinho’s farmers. Many of them can only sleep if they take medicine. For Edna Pereira, the situation is even worse. The wind farm was installed in the neighborhood shortly after she went through a delicate surgery to remove a head tumor. “I can’t sleep and I don’t have peace anymore, I get very agitated. Every time I go see the doctor, he increases my medication dose because I can’t sleep, and the medication doesn’t even work anymore. The noise from these towers hurts me a lot, but the doctors say they can’t do anything because it’s not their fault that they built the towers”, she says. Over time, things only got worse. “A few days ago I was startled by a noise in the towers, I fell and hit my head on the ground. The doctors asked me to do an MRI, but I haven’t done it yet because I can’t afford it.”

She has lost 22 pounds due to the stress caused by the noise. . “It can’t be like that, we have our rights. I didn’t want to leave my place because my place was very quiet, a place for one to live a whole life, and now there’s no way I can live here anymore. How can they come and take away our peace?”

​​Like Roselma and her family, Edna hopes that the company will buy her land, so she can move out. Meanwhile, she has sought refuge in her daughter’s house, who lives a little further away from the wind park’s limits.

The incident of the falling propeller that scared the residents of Sítio Sobradinho happened at the end of 2021 when one of the blades of the tower at the back of Roselma de Melo’s land exploded and fell. “The day the propeller broke was very scary,” recalls Roselma. “It was early in the morning, my children were still sleeping when, suddenly, we heard the explosion, it destroyed all the plants. That’s because it was just a piece of the propeller, if it had been the whole tower it would have done a lot more damage.”

In the video recorded by the family, it is possible to see the pieces of the propeller coming off the tower while the engine makes a strong noise.

“When it burst, material flew everywhere. There was a house close by, a piece fell on the terrace of the house. It just didn’t cause any more damage because there were some cables and it was hanging, but many pieces still flew”, said Luiz Bezerra, another farmer who lives close by.

The propeller destroyed a stretch of local vegetation, but it was little compared to the deforestation already carried out. The company had to build new access roads to build the wind farm, clearing a large area of ​​native vegetation. The new roads, in turn, brought another unprecedented problem to Sobradinho: violence. “After these roads were built, everyone became afraid, many people have already been robbed”, says Edna.

For six days, Marco Zero tried to contact the company Cubico Sustainable Investments through the website and through the corporate email of Louis Scorza, presented as the company’s communications director. Marco Zero did not receive any response by the publication of this story.

Created in 2015, Cubico is headquartered in London and has renewable energy projects in wind and solar technologies in 12 countries, including Uruguay, Mexico, Portugal, the United States, and Spain. In Brazil, the company has branch offices in the states of São Paulo and Fortaleza and operations in the cities of Caetés, Pernambuco state, and Araripe, in Piauí state.

In the “About Us” tab of the company’s official website, Cubico states the following: “We are committed to playing a significant role in the world’s transition towards clean energy while respecting the environment and social development of the communities in which we operate. We are passionate about shaping the future of energy with a long-term investment philosophy that generates stable returns for our shareholders.”

What does the State Environment Agency say?

Marco Zero also contacted the State Environment Agency (CPRH), to request clarification on the installation of the wind farm in the city of Caetés, but we did not get a response by the time of publishing.

Among the questions sent to the agency: “Did CPRH give an operating license to Cubico company?”; “Before granting the license, did the agency have a dialogue with the residents of the region or study the area?”; “Did Cubico present any plans to reforest the area that was deforested for the installation of towers and road construction? If so, is this plan being carried out?”.

Residents of Sítio Sobradinho haven’t received any answer either about compensation for their plight and those that haven’t moved yet expect the worst.  “We live in fear, when we hear any noise we already think it is the tower falling on top of the house. We have already seen some towers on fire”, said Roselma de Melo.