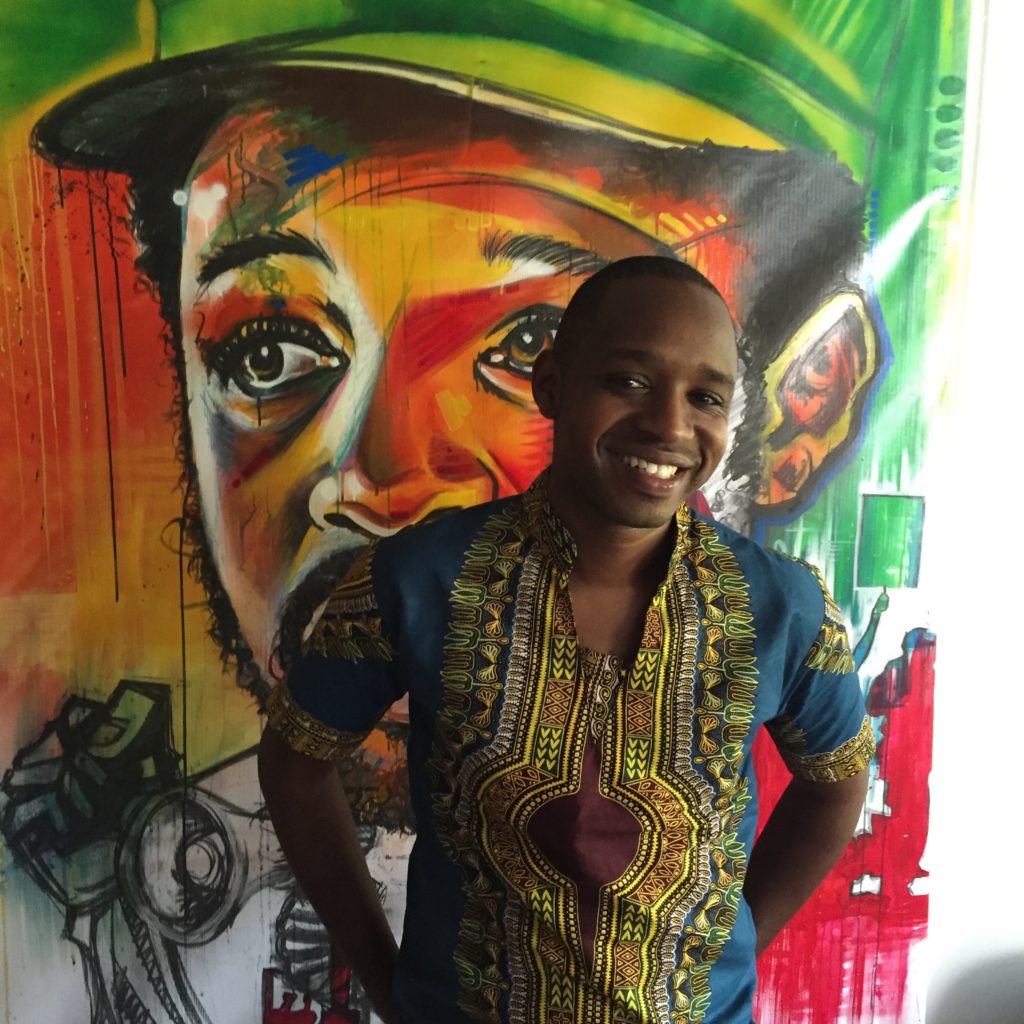 Boniface Mwangi stands in front of a painting in PAWA254, an art space and office. (Photo by Kevin D. Grant/GroundTruth)

NAIROBI – The threats on Boniface Mwangi’s life have been coming for years.

But Mwangi, one of Kenya’s most visible anti-corruption activists, formally requested a state security detail Sunday, after what he said were specific death threats upon himself, his wife and his three children.

“I state it on record that truth will never die, that my resolve for open and accountable governance remains undone and my fight for the equality of all shall live on beyond my death,” Mwangi said in a statement at Nairobi’s Central Police Station.

The 34-year-old rabble-rouser has risked his safety many times before. He covered post-election violence as a photojournalist in 2007, quitting the profession in 2008 to become a full-time activist. In a country where religious and especially tribal identities deeply intertwine with politics, Mwangi said he’s a “firm believer in Christ,” which he called his “first identity.”

“No one gave me life, no one can take it away,” Mwangi said last year. “Same with my freedom. This takes away my fear of death.”

Mwangi has poured his signature confidence and magnetism into a movement he calls “Team Courage,” combining civil disobedience, artistic expression and digital organizing to galvanize a generation of young Kenyans living in one of the most corrupt countries in the world.

“There’s a lot of looting in this country,” Mwangi said. “It makes it impossible to have moral or values. Young people are willing to cheat and steal. We steal from the dead. Our roads have high death tolls. You can get away with murder. Justice goes to the highest bidder. Hospitals have no medicine. We are a country of shortcuts.”

An annual corruption index released in January ranked Kenya near the bottom of the list, 145th out of 176 countries. It fell six places since last year, hallmarked by poorly functioning institutions, extrajudicial killing, misappropriated funds, bribery and extortion. Meanwhile Kenya’s youth unemployment rate is the highest in the region and the jobless have long since lost faith in government.

In this climate, Mwangi founded an arts space called PAWA254, near Nairobi’s Central Business District in 2011, where he reflected on a busy afternoon last year.

“When you find what you’re supposed to do in life, you get a form of contentment that is beyond explanation,” he said, sharing a collection of his photography that was about to become a book. “Even when things get tough, you keep coming back to it. But the thing you love the most can also bring you the most harm.”

With possible harm all around him, Mwangi continues travel across Kenya and around the world. He has just stepped away from leading PAWA as he focuses on his campaign for parliament.

“This 2017 election is the last election that will be determined by tribal formations,” Mwangi wrote on his Facebook page, which is followed by more than 200,000 people. “We are witnessing the rise of candidates with unexplained wealth, whose ideology is to flash money and buy votes. As a generation, we must shun and reject them.”

With six months until the Aug. 8 vote, Mwangi is also the defendant in a defamation lawsuit filed by the Deputy President Ruto, who Mwangi alleges is behind the death threats against him and his family.

“While the court is expected to determine the case independently, it is becoming clear that there is an active team commissioned to use extra judicial means to silence me,” Mwangi said on Sunday.

Some of Mwangi’s supporters see a Christ-like visage in the activist-candidate’s fight against corruption at personal hazard. His detractors allege a variety of charges, including that his organizing is part of a neocolonial plot by the United States and European powers (PAWA254, the arts and activism space, receives funding from the Dutch and Swedish governments, which is listed clearly on its website).

This kind of criticism doesn’t seem to phase him, as he has heard and seen much worse. He is accustomed to risking his life.

“At a protest, I’m one of the calmest guys. When it’s chaotic, I feel clear and I’m able to think,” Mwangi said.

While he has rockstar status among many young Kenyans, Mwangi also has fans among Kenyan elders.

“Boniface is massive. Anyone who doubts him doesn’t know what he’s doing,” said the mild-mannered and intellectually forceful priest.

Wandera wrote an essay for the Daily Nation newspaper in October calling for “moral action for youths.” It was pointedly critical of “ethnic political mobilization, economic inequality, corrosive poverty, and vicious violence that is now commonplace in our society.”

“There might be a need to encourage [youth] to engage in persistent acts of subversion, ethnic disloyalty, and find the moral courage to stand in solidarity with the least advantaged members of the community,” Wandera wrote.

“We must enable our young people to know how to live together in a diverse world, their responsibilities as well as their rights, the art of civility and manners, work, love, forgiveness and reconciliation.”

Mwangi is a kindred spirit of Wandera’s, it is clear.

At PAWA, Mwangi spoke about some of the religious violence that has touched Nairobi and other parts of Kenya in recent years, including the Westgate mall attack by al Shabaab that claimed at least 67 people in 2013, and the Garissa University attack that killed 148.

While some of the world’s political leaders focus on the narrative that “radical Islamic terrorism” is at war with Christian civilization, neither Wandera nor Mwangi buy that.

“The hate is superficial,” Mwangi said, a familiar serenity about him. “It’s almost nonexistent. We have coexisted for many years. Let’s live like brothers and sisters again.”