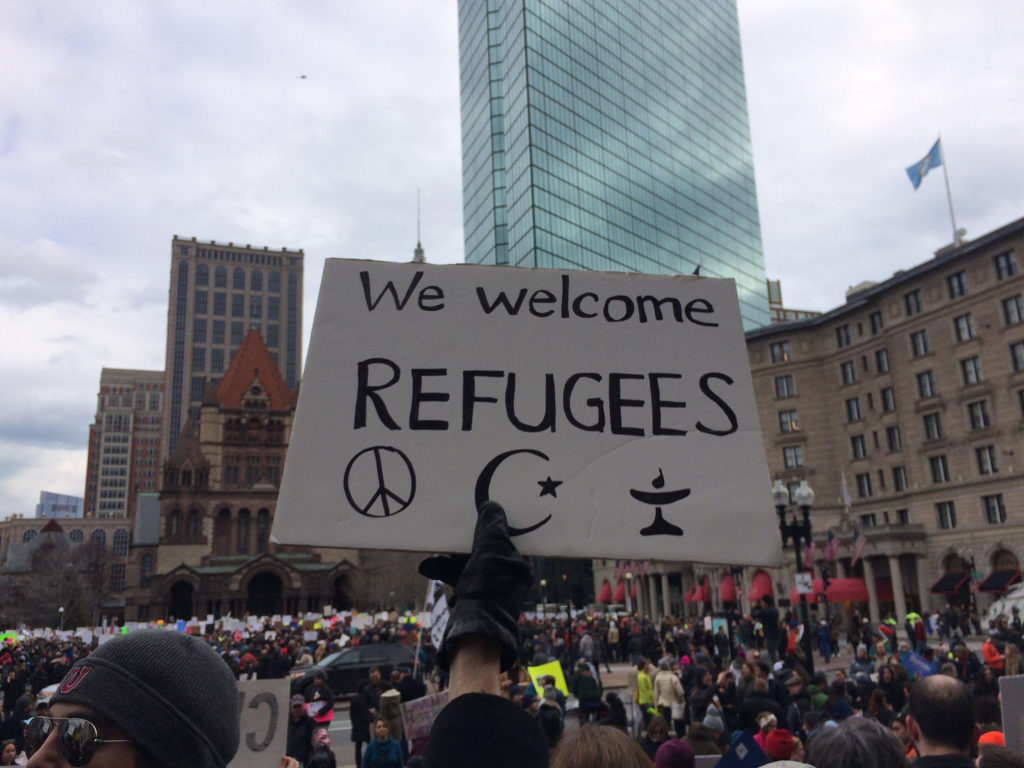 A sign reads "We welcome refugees" at a demonstration in Boston's Copley Square on January 29, 2017. (Photo by Giulia Afiune/GroundTruth)

BOSTON — These are the new front lines of the fight for democratic values in America: airports, public squares and courtrooms late into the night.

After President Trump signed an executive order Friday temporarily banning people from seven Muslim-majority countries and all refugees from entering the United States, impromptu protests bloomed at airports across the country Saturday as immigration attorneys furiously filed petitions to free their blindsided clients from detainment.

At Logan International Airport, Sen. Elizabeth Warren and Boston Mayor Martin Walsh joined immigrant and refugee groups to condemn the executive order. Protesters offered a cacophonous welcome as exhausted travelers emerged from their surprise limbo — and as national organizations including the ACLU challenged the ban in various courts.

A federal judge in Brooklyn issued a stay to protect those detained at airports from deportation, but the Department of Homeland Security said it will continue to enforce the order.

Walsh had promised Wednesday to open City Hall to protect Boston’s immigrants from the Trump administration following Trump’s executive orders blocking federal funding to “sanctuary cities” (Boston is one) and ordering construction of a wall along the U.S.-Mexico border.

“If people want to live here, they’ll live here. They can use my office. They can use any office in this building,” Walsh said, vowing safety in the face of a “destructive and un-American threat.”

At Copley Square on Sunday, more than 17,000 people were expected at an event organized by the Council on American-Islamic relations. The focal point: a plaque memorializing Lebanese-American author Khalil Gibran.

Looking to build on momentum from the airport protests and a series of rulings against what has been called the “Muslim ban,” the Copley demonstrators joined more than 30 other gatherings across the country.

Two federal judges in Boston issued a restraining order limiting Trump’s ability to enforce the ban on behalf of two Iranian professors, and the International Refugee Assistance Project immediately advised anyone traveling to the US on a green card to fly through Boston Logan.

Meanwhile, detainees remained in custody at several airports and White House chief of staff Reince Priebus suggested on “Face the Nation” that Trump would amend the policy to exclude “green card” holders but could expand the ban to Saudi Arabia, Egypt and Pakistan. Affected countries also pledged retaliation for American visitors.