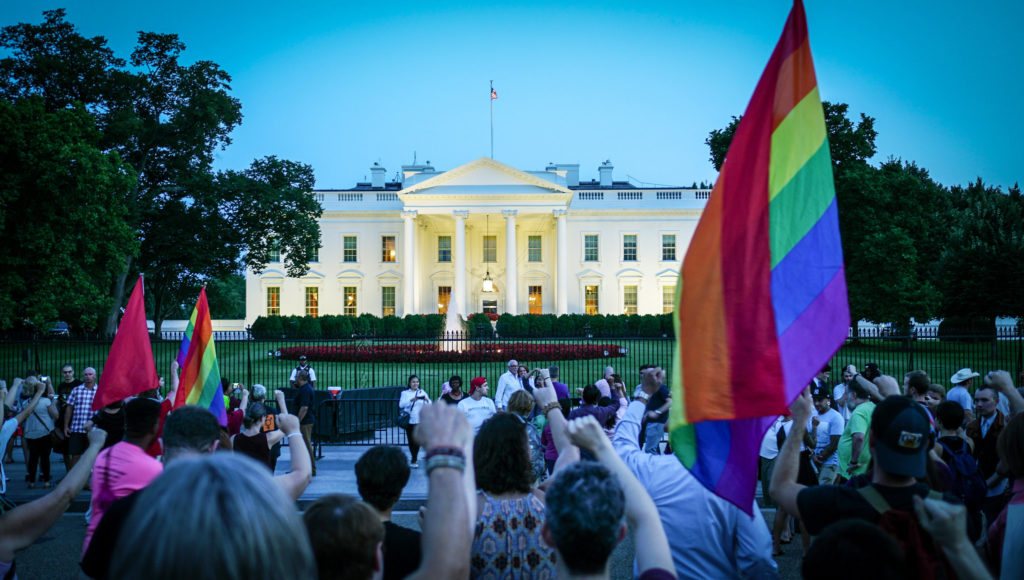 Protesters at the White House on July 26, 2017, protest Donald Trump's announcement on Twitter, that transgender military servicemembers will no longer be allowed to serve. (Ted Eytan/Flickr Creative Commons)

WASHINGTON—For the vast majority of American history, a powerful consensus held that gay people should not serve in the U.S. military, and the military was willing to go to great lengths to enforce that belief.

Thousands of enlisted men (and then women) hid their full identities, as those who were discovered faced court-martial, dishonorable discharge, denial of benefits and imprisonment. They endured hatred at home while fighting enemies abroad, scapegoating before their fellow Americans, humiliation at the hands of their superior officers.

During the Obama years, that consensus came apart. The president leveraged a sea change in public opinion to overhaul U.S. policy that restricted the rights and freedoms of lesbian, gay, bisexual and transgender people. He scrapped the military’s “Don’t Ask, Don’t Tell” policy — which had enjoyed bipartisan support under President Clinton — and helped kill the Defense of Marriage Act that barred same-sex unions.

Obama capped this new era of troops serving openly last year when he lifted the military ban on transgender service members with the support of Defense Secretary Ash Carter and other top brass. Yet before transgender members could be accepted under the new standards and policies, the Trump administration stepped in to undercut the process.

Secretary of Defense James Mattis announced last month that his department would delay implementation and conduct a review, a move that did not receive much national attention. Enter President Trump, who with an abrupt Twitter declaration Wednesday that the U.S. “cannot be burdened with the tremendous medical costs and disruption that transgender in the military would entail” [link to tweet] demonstrated how out of sync he is with military leadership — and with the country.

After consultation with my Generals and military experts, please be advised that the United States Government will not accept or allow……

….Transgender individuals to serve in any capacity in the U.S. Military. Our military must be focused on decisive and overwhelming…..

….victory and cannot be burdened with the tremendous medical costs and disruption that transgender in the military would entail. Thank you

The Pentagon was reportedly “blindsided” by Trump’s Twitter decree and Gen. Joseph Dunford, the chairman of the Joint Chiefs of Staff, said the ban can’t be enforced until the White House and Secretary Mattis follow the proper procedure. Mattis was on vacation at the time of Trump’s Tweetstorm, and affected service members now sit in limbo.

“In the meantime, we will continue to treat all of our personnel with respect,” Dunford wrote in a letter to the military service chiefs. “As importantly, given the current fight and the challenges we face, we will all remain focused on accomplishing our assigned missions.”

Sen. Orrin Hatch told MSNBC, “Look, people who are transgender, they don’t choose to be transgender. They’re born that way. And why should we hold that against them? And they’re human beings, and many of them are extremely talented human beings.”

Perhaps inadvertently paraphrasing Lady Gaga’s “Born This Way,” a pop anthem adopted by millions of LGBT people worldwide, a longtime senator who is not particularly progressive on other social issues seemed to encapsulate how far America has come on gay and transgender rights.

That is, a shared understanding that we as a country cannot do without our LGBT brothers and sisters. That our institutions including our military, companies and schools cannot do without their presence and their talents. It may have taken several decades, but we’re finally at the point where it’s obvious that a gay man or a transgender woman can be a patriot by serving his or her country. A leader like Sen. Hatch may not spend much time at Pride parades, but he’s offering his support in his own, influential way.

Yet without question, the country remains a hostile place for members of the LGBT community. LGBT people are the most targeted minorities for hate crimes and in some communities have risen in step with Trump’s candidacy and presidency.

And men like Attorney General Jeff Sessions have a track record of opposing equal rights. As President Obama was correcting the U.S. government’s posture toward its gay and transgender citizens in 2009, Sessions (then a Republican senator in Alabama) vigorously opposed the Matthew Shepard and James Byrd Jr. Hate Crimes Prevention Act, which, in part, “extended federal hate crime protections to people victimized because of their sexual orientation, gender or gender identity, or disability.”

It is clear Sessions has not changed his posture. On Wednesday  — the same day that Trump announced his new policy on transgender service members — Sessions’  Justice Department filed an amicus brief arguing that Title VII of the Civil Rights Act of 1964, the section that prohibits workplace discrimination, does not protect gay and lesbian employees.

It would seem that this administration would like to roll back the clock rather than continue the progress that has been made. But as Trump and Sessions take a stab at a coordinated attempt to suppress and override LGBT rights, American history tells us that hatred and discrimination can be unlearned. And they can be defeated.