How should journalists respond if Trump prematurely declares victory? 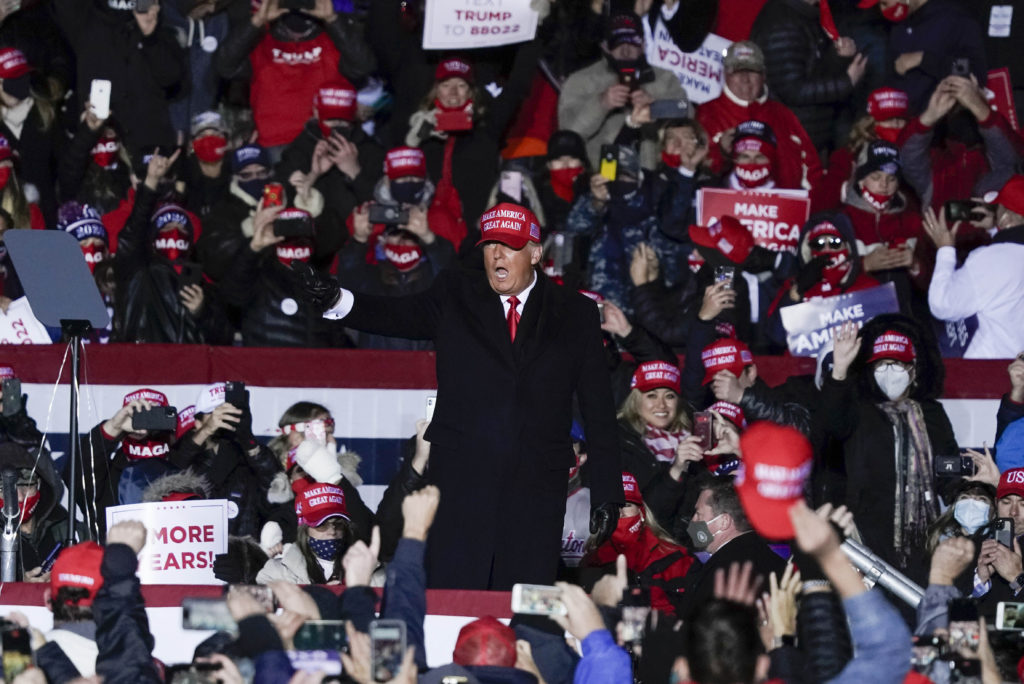 According to a report by Axios, President Donald Trump told aides he planned to declare victory early. After the story was published, Trump denied it. (Photo by AP/Morry Gash)

Journalists could unwittingly cause mass confusion if President Trump falsely declares his own victory, and news outlets rush to repeat it.

Trump has reportedly told aides he will declare victory early tonight if he appears to be “ahead.” The president was quick to deny it, but the concern remains: How should journalists respond if Trump jumps the gun?

The author of the best-selling-book-turned-HBO-Documentary “The Perfect Weapon,” Sanger wrote that “the most direct threat to the electoral process now comes from the president of the United States himself” following the first presidential debate. During the broadcast Trump said there would be no way the 2020 presidential election would be conducted without fraud, and that he would try to throw any outcome if he was not re-elected.

The Washington Post’s Margaret Sullivan says that journalists will have to act against their nature and practice the virtue of patience.

The media columnist writes that any answer that comes Tuesday night or beyond could be “misleading, incomplete or just plain unavailable,” forcing journalists to get comfortable with uncertainty and to explain relentlessly.

In a similar vein, former GroundTruth fellow Matt Negrin, now senior digital producer at The Daily Show with Trevor Noah, is confident that President Donald Trump will claim victory before the final count is in. He has declared his plea for all of his Twitter followers to see: Rather than repeat his lie, “Can we please say ‘Trump FALSELY claims victory’ instead?”

“I know it’s crazy to say, ‘Can you please not cover the President of the United States saying he won the election,’ but if it were me, I wouldn’t,” Negrin said in a Zoom interview.

In The Road to Now’s four-episode special series “Making the Call,” he speaks with Edward-Isaac Dovere, who covers former vice president Joe Biden for The Atlantic, about why he believes Trump will not concede. He also interviews Pennsylvania Attorney General Josh Shapiro about what journalists need to know in order to prepare for the event in which Trump claims that voter fraud cost him the election.

Versha Sharma, senior correspondent at NowThis News, tweeted in agreement to Negrin’s calls for being precise in the event that Trump gives a fictitious claim to victory. Her newsroom is preparing for what exact language they will use to call out the lie.

Robert Hernandez, associate professor at USC Annenberg, urged broadcast news organizations to not go live to Trump if he lies about the results, asking reporters not to compromise their integrity for a live shot.

So, what should journalists do if Trump declares victory before every ballot is counted? GroundTruth spoke with Negrin and Sanger to get their strategies for Election Night and beyond.

GroundTruth: How do you think journalists should report on Trump announcing his own victory prematurely? To you, what is a journalistically-sound headline that reports Trump’s declaration that he has won before the final count is in?

David Sanger:  We are all acutely aware that the president doesn’t get to decide or declare who wins elections in the American system. So I would expect that no one is going to rush the results. Among the reporters and editors I’ve spoken to at the Times and elsewhere, I’ve heard nearly universally the words: “It’s more important to be right than to be first.” And so I suspect that people are going to break down both what we know and what we do not know. That means explaining what percentage of the vote is already counted in every state. But the numbers alone will not tell the story. What percentage of the vote comes from same-day voting, previous voting and mail-in ballots? That is particularly important because there’s an expectation, right or wrong, that Democrats are heavily represented in the mail-in vote and that Republicans may be more prevalent in the in-person voting on Tuesday. So no one wants to make the mistake of basing your projections by a single category of votes that doesn’t turn out to be representative of the final totals.

I think the most important thing is that if you announce the results as you receive them, you include words to the effect that ‘the outcome is unclear because…,’ ‘Biden takes key states,’ and then I would put [Trump’s] declaration that he is winning, or has won, in a subhead. I wouldn’t actually base a headline with his declaration. I would headline with the facts. Remember, his declaration has no effective, legally binding value. In our system, it’s not within the power of the President of the United States to decide who wins elections, particularly presidential elections.

Matt Negrin: They should not report that he is doing it as if he’s just speaking about any plain old fact. The default that journalists covering the White House have is that, ‘The president said this,’ ‘Trump said this,’ ‘Obama said this.’ There’s a problem that exists with giving the president authority and to carry over from previous presidents. Obama was, in general, a trusting and honest person. Obviously he’s a politician, he did not always tell 100% of the truth, he put an emphasis on his side of the story, he spun it. That’s all like incredibly obvious to anyone, but he never lied about stuff, outright.

That same model carried over to President Trump, when instantly it should have been clear to everyone that he is not being truthful and so therefore doesn’t deserve that same assumption of truth that Obama got…So when you apply the same formula, it’s disingenuous, it’s not as honest. As a journalist you are not being as honest.

Also, there’s an argument for not even covering it, and I know that’s impossible as a reporter to be like, ‘There’s a piece of information out there that is insanely juicy and maybe I shouldn’t talk about it.’…And so I think there’s kind of like another level, that journalism has to kind of adapt to that and over the past four years, like we really haven’t. So, I know it’s crazy to say, ‘Can you please not cover the President of the United States saying he won the election,’ but if it were me, I wouldn’t.

GT: What mistakes have journalists made in the 2016 race that led to misinformation about the candidates’ performance?

Sanger: In 2016, there were things we did not know until well after the election. For example, we understood the Russians’ infrastructure hacking. In other words, getting into the registration systems of the few states, obviously getting into the DNC computer system and [Former Chair of Hillary Clinton’s 2016 Presidential Campaign John] Podesta’s emails. But while we understood the hacking part, we did not have much of an understanding of the depth and sophistication of the information operations, the Facebook ops and all that. So, I think this year we’re going to be in a lot better shape on that because everybody’s guard is up.

Already the Russian playbook has changed. There are some people who believe that the Russians may be waiting to see how close this election is before they decide whether it’s worth launching serious information operations. In other words, the information operation may come in the aftermath, not on Election Day, as much. Obviously there have been some influence campaigns so far, Russian, Chinese, Iranian. There are lots of lessons from 2016. I’m not sure how many of them directly apply to 2020 because the dynamic of this whole race is so different.

Negrin: There were a lot of mistakes in 2016, and some of them were at the time forgivable because we just kind of assumed Trump was going to lose. Everyone in the news media, with the exception of very few people… thought Trump was going to lose…Obviously in retrospect it was not a great thing. I was a part of that, not at a huge outlet but I regret that. I regret all of the stuff I did in 2016 that didn’t take Trump seriously. And part of the reason we didn’t was because Hillary [Clinton] was ahead in every poll.

One of the ways that they screwed up was obviously with a huge emphasis covering Hillary Clinton’s emails as a scandal when it wasn’t. It was certainly a bad thing, and objectively like, yes, Hillary Clinton deleted emails to get around Freedom of Information Act laws so that journalists wouldn’t be able to find what she was writing about. Of course it’s not good. Plenty of people do that in government and it’s awful and we should get to the bottom of it. [But] giving it the same level of attention, or close to the same level of attention as the waterfall of Trump scandals that we’re having during the campaign, is one of the things that was harmful.

GT: Journalists have tried, and failed, to wrest the narrative from Trump before, is there anything we can do this time? And if not what can we do to limit the damage?

Matt Negrin: What the press can do is when they get a chance to ask Trump a question, which they most likely will the next day… is to frame the question, instead of saying, ‘Mr. President, why do you think that you won?’ They can say, ‘Mr President, why haven’t you called Vice President Biden to concede?’ That way, Trump has to answer in the way that gets you the headline: “Trump refuses to concede.’..Anything that gets you away from: ‘Trump declares victory,’ ‘Trump says blank.’ That is what you want to stay away from. The problem with the White House press corps is that they don’t ask good questions most of the time. They feel that their job is to get the president to make news, which is this terrible phrase in journalism that comes out of this idea, ‘Well the president is the biggest newsmaker in the world, so if he says something, if the president weighs in, it’s news.’ But it’s not news, it shouldn’t be news if it’s a lie. And then if he does lie, then the lie should become the news…

So I think journalists can take that agency. I mean, everyone has a role in this, the reporters who are on the ground at the press conference can ask good questions that frame it in a way that puts Trump on the defensive because he should be on the defensive, even journalistically speaking. He is anti-truth. He should be put on the defensive, it’s not ideological, it’s just saying, ‘Here’s the reality. You are against it. Why haven’t you ___?” The headline writers can take that too and frame it in the right way so that people reading it on Facebook, people reading it on websites, people seeing chyrons on television, they can look at it and say, ‘Okay, Trump is denying the reality, Trump is refusing to accept the results.’