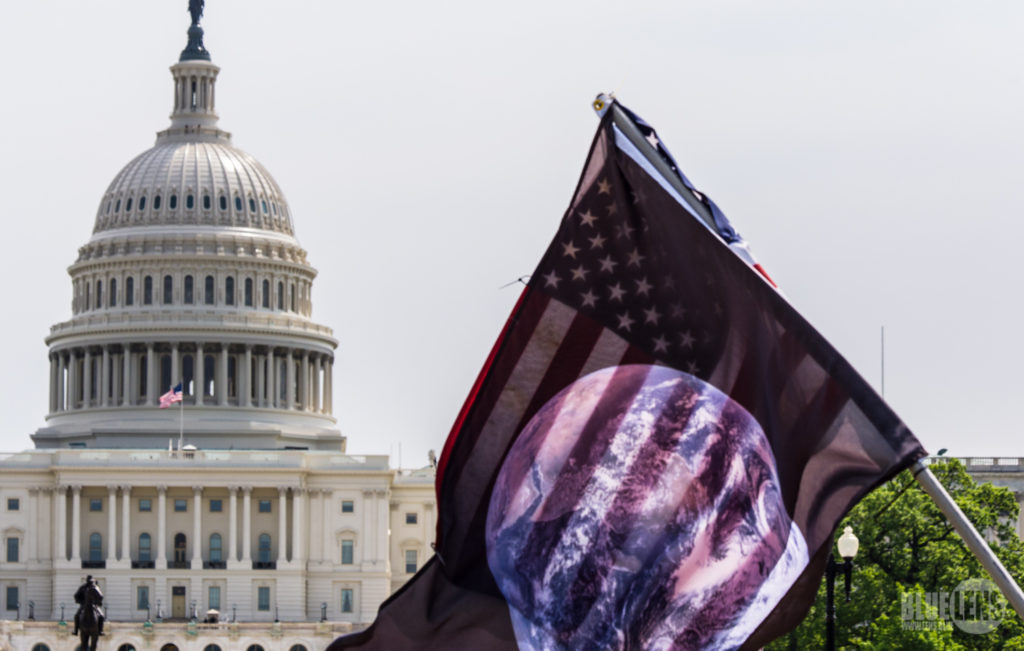 An American flag including the iconic "Blue Dot" photo flies as part of the People's Climate March on Capitol Hill on April 29, 2017. (Mark Dixon/Creative Commons)

WASHINGTON — A ring of authoritarian world leaders riding hungry wolves encircles a group of journalists as President Donald Trump looks on, stroking his chin, in an illustration accompanying a dire new report on press freedom.

Russian President Vladimir Putin is there, as is Turkish President Recep Erdogan and Philippine President Rodrigo Duterte. The surrounded reporters defiantly shout questions and point at their stone-faced tormentors while filming, snapping pictures and taking notes.

The Freedom House, which published the report, finds the United States moving from champion to villain in a way that is unprecedented in 38 years of publication. Because freedom of the press is deeply intertwined with other democratic freedoms, by attacking the press, the Trump administration is helping to push the world away from democracy.

“No U.S. president in recent memory has shown greater contempt for the press than Trump in his first months in office,” writes the organization’s president Michael J. Abramowitz. “[He] may, in effect, be offering a license to political leaders elsewhere who have cracked down on the media as part of a larger authoritarian playbook.”

In America, the First Amendment is the first line of defense against that playbook, protecting assembly, expression and the press (among other things) in 45 carefully chosen words. Trump’s 100th day in office offered some hope that Americans have not forgotten their rights, though polls show they are not nearly as familiar as they could be.

On Saturday, the same day in which Trump invited the authoritarian, self-admitted extrajudicial killer Duterte to visit the White House, tens of thousands of protesters at the People’s Climate March encircled it, demanding the administration cease its efforts to undermine green energy policy.

The significance of record heat — 91 degrees — was not lost on marchers who sat on the baking pavement of Pennsylvania Avenue and drummed heartbeats on their chests for 100 seconds Saturday to mark the occasion. Theirs was not a gesture of warm appreciation. Rather, the group’s heartbeat sounded like a ticking clock for a warming planet, a reminder that “the earth doesn’t have four years,” as one popular sign put it.

That evening, as demonstrators moved on from the National Mall, some of the country’s journalists gathered for an unusual White House Correspondents’ Dinner, which the Trump administration declined to attend. As Trump again excoriated the press at a rally in Harrisburg, Pennsylvania, Daily Show correspondent Hasan Minaj did not shy away from roasting the president — and celebrating his constitutional rights in the process.

“This event is about celebrating the First Amendment and free speech,” Minaj said. “Free speech is the foundation of an open and liberal democracy. From college campuses to the White House. Only in America can an Indian-American Muslim kid get on this stage and make fun of the president.”

The Correspondents’ Dinner is a black-tie affair where traditionally, press and celebrities get together with the president and members of his administration to exchange barbs and laughs. Critics say the event is too cozy, an elitist gathering that symbolizes everything that’s wrong with Washington (The New York Times forbids its reporters from attending).

President Obama and comedian Seth Meyers relentlessly roasted Trump there in 2011, a humiliation which PBS FRONTLINE reported helped precipitate Trump’s run for president. In light of Trump’s relentless attacks on the press, his absence and the fact that it fell on his 100th day in office, the dinner took on greater symbolic meaning this year.

“Even the president is not beyond the reach of the First Amendment. But the president didn’t show up,” Hasan said. “Because Donald Trump doesn’t care about free speech. The man who tweets everything that comes into his head refuses to acknowledge the amendment that allows him to do it.”

At his rally in Pennsylvania, Trump boasted about skipping the dinner and again hammered at the press. Though President Richard Nixon also cast journalists as “ the enemy,” much of his vitriol was saved for private conversations. Trump has made media-bashing as public spectacle foundational to his presidency.

“You may know there’s another big gathering taking place in Washington, D.C.,” he said. “And I could not possibly be more thrilled than to be more than 100 miles away from Washington’s swamp. Spending my evening with all of you and with a much much larger crowd, and much better people, right?”

He continued, “Their priorities are not my priorities, and not your priorities. If the media’s job is to be honest and tell the truth, the media deserves a very, very big fat failing grade.”

Organizations like Freedom House, along with Reporters Without Borders and Committee to Project Journalists, which have all put out similar reports ahead of World Press Freedom Day on May 3, warn that popularly supported authoritarians are pushing press freedoms and freedom of expression to a “tipping point.”

“Donald Trump’s rise to power in the United States and the Brexit campaign in the United Kingdom were marked by high-profile media bashing, a highly toxic anti-media discourse that drove the world into a new era of post-truth, disinformation, and fake news,” found Reporters Without Borders. “Media freedom has retreated wherever the authoritarian strongman model has triumphed.”

So it was fitting that organizers launched Saturday’s climate march directly in front of the Newseum, where the First Amendment is carved in full into the stone face of the building.

The amendment reads, as it has since its ratification as part of the Bill of Rights in 1789 and adoption in 1791: “Congress shall make no law respecting an establishment of religion, or prohibiting the free exercise thereof; or abridging the freedom of speech, or of the press; or the right of the people peaceably to assemble, and to petition the Government for a redress of grievances.”

Long may it be so.