The trauma of white supremacist violence, from Charlottesville to El Paso 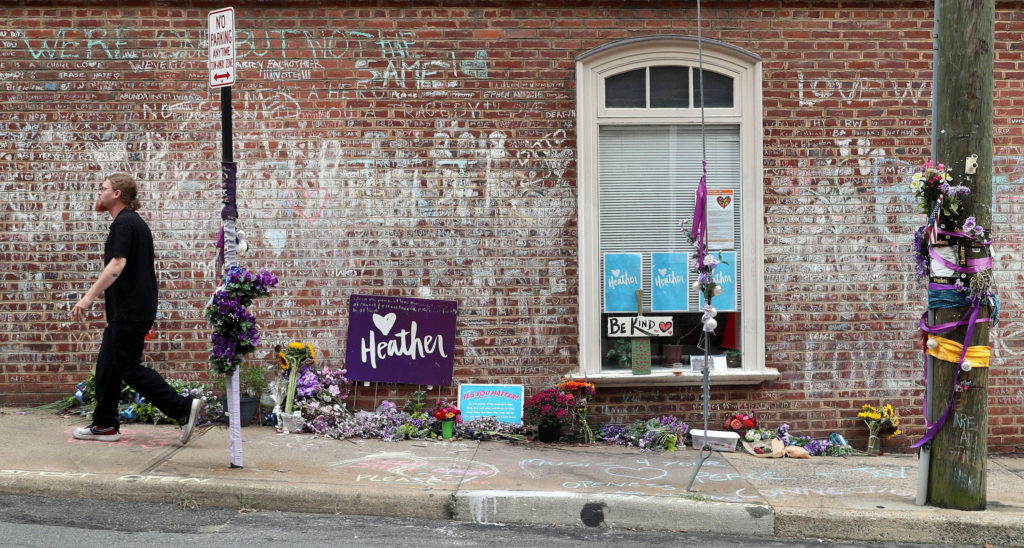 The memorial for Heather Heyer who was killed during 2017 Unite the Right rally on Fourth Street remained quiet Saturday as the anniversary of her death approaches in Charlottesville, VA. Photo/Andrew Shurtleff Photography, LLC

CHARLOTTESVILLE, Virginia — Messages of hope and resistance are etched in multi-colored chalk along the red brick walls of Fourth Street.

The makeshift shrine is just a few steps from the place where 32-year-old Heather Heyer was killed two years ago today after a white supremacist, James Alex Fields Jr., traveled from his native Ohio to attend a gathering of white nationalists here and ploughed his car into a crowd of counter-demonstrators.

Heyer’s killing — and the injuries suffered by more than 30, mostly local residents, hit by Fields’ grey Dodge Challenger — became a rallying cry by the community here and across America to stand up to the racist rhetoric of the white nationalists who marched through the darkness with tiki torches.

“May we find peace in our hearts for those who HATE, and pray that they will one day feel LOVE,” reads one quotation posted on a telephone pole along what is now Heather Heyer Way. There is a Tupperware container filled with large pieces of colored chalk and passersby have been etching out messages like this that call for reflection and hope for enlightenment to come out of the darkness of what happened here.

But Charlottesville’s efforts to process and recover from the hate-fueled violence of the Unite the Right rally, a gathering which invited in white nationalist groups from across the country, is complicated both by the city’s own racist history and the barrage of new attacks by white men on communities from El Paso to Dayton to Pittsburgh who seemed to be fueled by the same white nationalist rhetoric that inspired Fields.

Fields, who was 20 at the time of the attack, was convicted of first-degree murder and federal hate crimes and sentenced to life in prison plus 419 years.

Tonight, Mitchell will host a discussion at UVA titled “Beyond the Statues: The Invisibility of Black Charlottesville” featuring residents, activists, and scholars who’ll contend with the idea that the city was vulnerable to an invasion of white nationalists in part because the city had erased its own Black history, one which is irrevocably intertwined with what Mitchell calls its “long and storied racist history.”

From Thomas Jefferson’s use of slave labor to build UVA, to students’ overwhelming Confederate support in the Civil War, to a pioneering eugenics program at the university, to the city’s resistance to desegregation, and the razing of the black neighborhood of Vinegar Hill, the continuum of white harm to African Americans in Charlottesville runs deep — and continues to grow.

Indeed, UVA is the alma mater of two of the Unite the Right ringleaders, Jason Kessler and Richard Spencer, who galvanized a movement in opposition to Charlottesville’s plan to remove a statue of Confederate general Robert E. Lee.

That statue, along with one of Thomas J. “Stonewall” Jackson, still stands amid a protracted legal battle.

“Part of the reason we got here is because a lot of that stuff hasn’t been examined,” said Mitchell, who was born in Charlottesville and who in September 1960 began attending Virginia L. Murray Elementary School in nearby Ivy. As Mitchell recounted, “the school was part of the massive construction effort to build ‘colored schools’ as one leg of the Commonwealth’s Massive Resistance against school desegregation.”

She said the surge of white violence in the Trump era is something she hasn’t seen since the 1950s. Those hoping for a clear renunciation by the White House of surging racist violence reminiscent of the Jim Crow era heard Trump equivocate.

“You had many people in that group other than neo-Nazis and white nationalists,” Trump said in the wake of the Unite the Right rally. “The press has treated them absolutely unfairly. You also had some very fine people on both sides.”

On the afternoon of August 12, 2017, Mitchell arrived to the scene of the vehicular attack on countermarchers just minutes after Fields accelerated into the crowd and then fled the scene. She’d been out of town buying a dress for a friend’s wedding. She turned on to Water Street as protesters were still fleeing the violence on Fourth Street.

Mitchell said she asked a Black woman what had happened. “They killed a white woman!” was the response.

“I was part of the first generation who benefited from the [Civil Rights] pioneers. I was always comfortable with white people,” Mitchell said. “But not anymore. The mall is not safe, the movie theater is not safe, Walmart is not safe, for God sakes. What are they going to do next?”

As El Paso recovers from the massacre of 22 people by an avowed white supremacist who told police that he was targeting Mexicans as he sprayed civilians with an AK-47-style rifle, it becomes increasingly clear that the incendiary words that President Trump uses at his rallies are being mimicked and embraced by white nationalists carrying out violence.

Researchers at Texas A&M University-Commerce and University of North Texas found that counties which hosted a Trump rally in 2016 saw a 226 percent increase in hate crimes, while hate crimes have continued to rise nationally since 2016. A USA Today investigation found that Trump has frequently used words like “invasion,” “animal” and “killer” in reference to immigrants, the same kind of rhetoric used by the El Paso suspect in his manifesto.

“Too many people still think of these attacks as single events, rather than interconnected actions,” wrote historian Kathleen Belew in a New York Times op-ed last week. “We spend too much ink dividing them into anti-immigrant, racist, anti-Muslim or antisemitic attacks. True, they are these things. But they are also connected with one another through a broader white power ideology.”

In Charlottesville, the city is hosting Unity Days for the first time this year, including arts and culture events, religious services and workshops for activists. A coalition of backers unveiled a black-and-white mural including the portraits of 120 local activists running along the wall of the Violet Crown theater just four blocks from where Heather Heyer died.

But like the United States, Charlottesville has yet to fully contend with its own history, its own present-day capacity for hate and the way that these attacks on the country’s most vulnerable people tear at the fabric of society. Amid a spree of deadly attacks on Hispanics, African Americans and Jews, many feel things are going to get worse before they get better.

“It’s a rancid, ugly stew,” Mitchell said. “It’ll take a long time to fix. And maybe it can’t be fixed.”

The rise of white nationalist violence in the United States and across Europe is part of a global story GroundTruth is following as part of its Democracy Undone series, which will launch in September with support from the MacArthur Foundation and The Henry Luce Foundation.