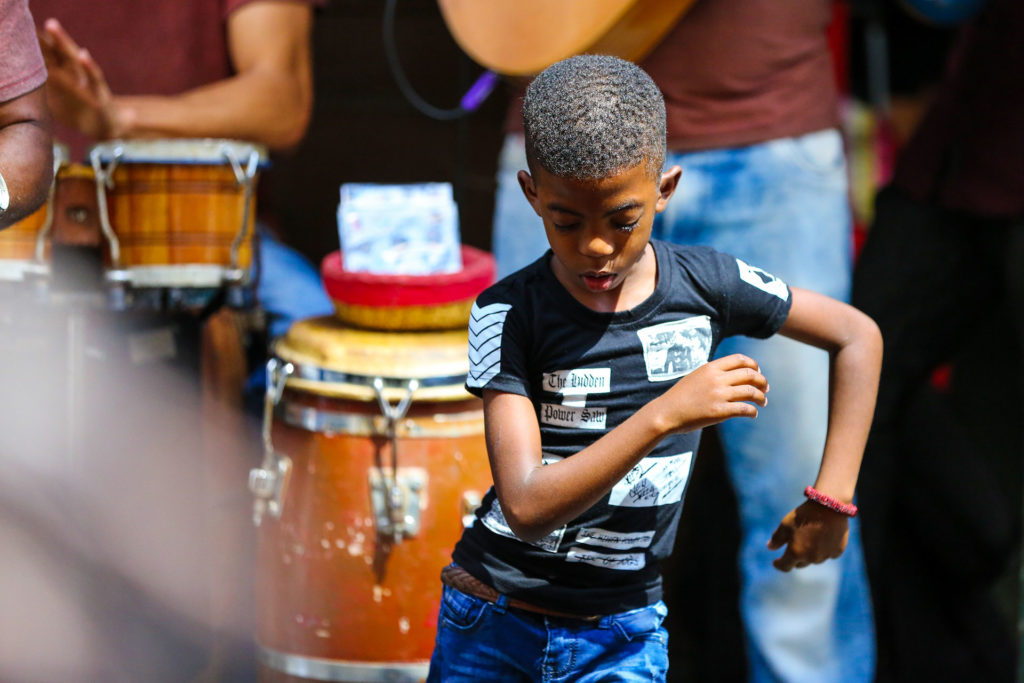 A young boy dances the rumba while a band plays on the street March 2, 2019, in Old Havana, Cuba. The rumba is a popular style of Afro-Cuban music and dance. (Photo by Joshua Qualls/GroundTruth)

Cuban music is known around the world for its percussion, particularly the way it makes use of the clave, the building block of Latin music. We visited Cuba to trace the origin of the clave and how Cuban music’s influences can be traced to the Yorùbá people in Africa, whose music has a profound religious component.

The influence of Cuban music is heard all around the world. Gloria Estefan, Arturo Sandoval, Buena Vista Social Club and, of course Tito Puente, have all had success bringing Cuban music to the masses.  But when you hear Cuban music, do the Yorùbá people and the batá drum come to mind? For some, there’s no connection, but for others, this tribe and their drums are the roots of Cuban music.

[Tape Recorder Rewinding] The history is deep and long, and takes us all the way across the Atlantic Ocean:

It started in 1511, when Diego Velásquez de Cuéllar arrived in Cuba to establish a settlement for Spain. Sugar plantations and tobacco were the money makers and human slaves were shipped from West Africa to Cuba to do the hard work:

It’s often difficult to identify most of the countries that influenced cultural practices of the diaspora.

Olabode Omojola, Nigerian professor of ethnomusicology at Mount Holyoke College about where these men, women and children came from:

[Bata Drumming in the Background]

The Yoruba people live in Western Nigeria and are found in the Benin Republic. Their music is heavily associated with religion, which in Cuba has evolved into the religion known as Santeria. It’s hard to dispute that Yoruba culture and sounds have made a lasting, profound impact on the music in Cuba. After all, there’s the Yoruba Cultural Association and Casa de Africa in Old Havana. Professor Omojola explains the Yoruba religion and its deities:

So Yoruba music has a very strong religious theme. I think it could be said that the most profound examples of Yoruba music are associated with religion. The whole basis of the Yoruba religion is the belief in one supreme God, that is known as “Olodumare” or “Olorun” which means the head of the universe. And the owner of the heavens and that is served by smaller Gods, you know deities.  So, you have deity of lightning [Thunderstorm, River Sounds], deity of the river, of the wind, of beauty, you have all this in Cuba. For example, the deity of lightning is referred to as “Shango” and Shango has a kind of music that is associated with it which is called Bata drums and the Bata drumming.

[Sound of Interview and Drumming Continues in the Background]

By the way, the Bata drumming you’re listening to in the background is thanks to Master Drummer Diunis Valdes O’Farrill and her family in Havana, Cuba.  [Bata drumming loud] More on her and my trip to Cuba later…

The Bata groups usually have four drums, the lead drum or mother drum, called “Iya Ilu.”  In Yoruba tradition, this drum is played by the eldest of the group, normally the most proficient. The second drum in Cuba is called “Itotele” and in Yoruba culture it’s called “Atele.”  Two smaller drums round out the ensemble and create the most recognized rhythm in Latin music:

These two drums, small drums that are tied together to play what I described as ostinato patterns.  The most common example, you’re probably aware of, is the one that is played on the gongs in some of the ensembles or the bell, which is (Sings Clave) there are different varieties of that pattern at times its (Sings Clave).

And there it is, the clave. The heartbeat of all Latin music, is African. I spoke to Dan Fox, musician and owner of Morningside Music Tours in Arlington, Massachusetts. He’s traveled five times to Cuba with his students and taken classes with world-class musicians there. He loves Afro-Cuban music and, because of leniencies granted for travel during the Obama era, found an opportunity to explore and learn about it. He talked about the “key” to this music:

The word clave is the same word as the Spanish word “llave”. [Clave Sound in Background] I don’t know if anyone explained that to you.  Llave means key. And the rhythm of the claves or the clave pattern, that’s the key…the foundation to all Latin music. So that’s an interesting thing.

[Sound of interview & Clave Continues in the Background]

The beginning of the clave in Cuba is one of creativity. [Port and Sandpaper Sounds] African slaves couldn’t bring their drums across the Atlantic Ocean. No slave trader would dare allow something so powerful, so important to the Yoruba people, such as the bata drum. So, they used the tools around them to create something familiar, something to bring them home:

So, the story goes that the Africans that were working on the docks in Cuba on the boats.  [Dock Noises] They picked up these pegs, the pegs that were used in boats, a lot of boats did not have nails because nails were very expensive, so they just had wooden pegs. They picked them up [plays clave] and started hitting them together and that was the beginning of this instrument.

And from there, Africans began to change the island culturally, musically and spiritually.  To understand this impact, I needed to talk to someone in Cuba whose life revolved around Yoruba traditions and Yoruba music.

So I flew to Cuba with a group of classmates from Northeastern University and went to Casa de Africa where I met a lead drummer:

Diunis has been playing folkloric music since childhood.  She’s the director of the all-female group Rumba Morena, a well-known folkloric emsemble that’s been around for 23 years.  This is unusual in Yoruba tradition. Men are often bata drummers, but in Cuba, women are being formally trained and creating their own groups.

[Bata Drumming in the Background]

I asked Diunis about the bata drums:

These drums are also known as “talking drums.”  By simply altering the tone of the mother drum the meaning of the message changes, a new meaning is created.  The ostinato pattern of the clave and many other patterns support the mother drum.

[Voice Over Narration with Interview in Background]

To be a great musician Diunis says you need to know the clave and there are many different variations to this pattern:

The drumming in the background is Diunis playing the mother drum, her brother Osnier playing “Itotele” and her son Julio Cesar playing “Omeli.” She also plays the tumbadoras or the congas, the instrument that most people recognize in modern Latin music.

Most Cuban Americans call Miami home, but Boston has its pockets of lively Cuban music too.  Boston-based-band Clave and Blues is a Cuban music and Latin band that gigs around the city. Sometimes they are six people holding the groove, but on this particular Thursday night, they were a trio at Dona Habana, a Cuban restaurant on Massachusetts Avenue. Puerto Rican percussionist Zayra Pola explained when she started playing music:

Zyra: Whoa since I was in the belly of my mother. I come from a family of musicians, both sides.  So imagine I started when I was, professionally when I was 11 years old, I’m 31 so it’s been my world.

Collyn: Did you always play percussion or congas?

Zyra: Yes, yeah my dad is a bass player and they were expecting something related to that so they got surprised when I start hitting the pots of my mother.  So yeah percussion is my passion and I don’t see myself doing anything else.

That night, the band set-up with congas in the middle. The foundation to many Latin music bands.  As they played, the audience, bigger than usual, sipped drinks and ate their meals. [Clave and Blues Music] Whether on the streets of Havana or on Massachusetts Avenue in Boston, Afro-Cuban music brings people together. The same rhythm and sounds that came from the Yoruba people are the same sounds that we dance to today, just packaged a little differently.  The history of Cuban music begins in West Africa and continues to evolve and travel all around the world.

[Clave and Blues FULL and Recording Fade Out]