EXETER, N.H. — Whenever Chris Clark entered the science lab at the University of Massachusetts, he was always careful. Clark, an undergraduate research assistant, wore gloves, a mask and a lab coat. A fume hood shielded him from the toxic man-made chemicals he was handling, perfluoroalkyl and polyfluoroalkyl substances, or PFAS.

Despite Clark’s strict research protocol, he had been unknowingly contaminated by PFAS outside of the lab: through his hometown’s drinking water. In 2014, Westfield, Massachusetts recorded more than 200 parts per trillion (ppt) of PFAS in its drinking water. At the time, this was within the threshold the U.S. Environmental Protection Agency advised for water safety.

But, two years later, during Clark’s first year studying the chemicals, the EPA lowered the threshold to 70 ppt for two chemicals in the PFAS family and Westfield is now one of at least 33 sites in the New England area to have unsafe levels of PFAS in the water, according to the Environmental Working Group.

“When I realized what chemicals were in [Westfield’s] water, I said, ‘Oh my god. These chemicals that I’ve been drinking for my entire life are literally being studied in my very own lab,’ “ Clark said, referring to his work with Alicia Timme-Laragy, an assistant professor of environmental health sciences at the University of Massachusetts Amherst.

PFAS chemicals can be found in nearly every corner of modern life, from nonstick pans and cleaning products to firefighting foam. Recently, the class of chemicals has caused concern around the country as it has been detected in drinking water and increasingly associated with negative health impacts.

Clark and other residents from the affected New England communities have banded together over concern about their health, and the EPA held its first public hearing on PFAS water contamination in the region in June. Despite the EPA’s health advisory, PFAS are not currently regulated by the agency. The EPA used the hearing, held here in New Hampshire, to gauge public opinion on creating a national Maximum Contaminant Level, or MCL, which would make PFAS levels legally enforceable.

The move to gather public input came after a series of highly criticized actions by the Trump administration — in May, newly disclosed emails revealed the EPA and White House had suppressed a report recommending a lower safety threshold for PFAS than the EPA had previously advised. Later that month, the EPA barred reporters from attending a public summit on water contamination in Washington.

Now, after sharing their stories with the agency during the hearing, Clark and others fear their concerns could get lost in a bureaucratic shuffle as the administrator of the EPA, Scott Pruitt, has since resigned. The acting administrator, Andrew Wheeler, is a former coal and chemical industry lobbyist who has worked in federal government for more than 18 years.

“My fear is that Mr. Wheeler could potentially turn a blind eye to the communities affected and only communicate with the people in Washington,” Clark wrote in an email. 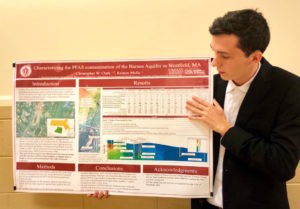 Wheeler has publicly promised to continue the work his predecessor started. In an address to employees publicized by the EPA, he praised Pruitt’s accomplishments, vowing to continue “improving how chemicals are reviewed for safety.”

The EPA last week held a second public hearing in Horsham, Penn., and will follow that with events in Colorado and North Carolina. The agency has promised to incorporate public sentiment from these hearings in a “PFAS Management Plan” set for release by the end of the year. “Administrator Wheeler is dedicated to addressing this important issue and sticking to an aggressive timeline,” said an EPA spokesperson in an email.

But Shaina Kasper, a community organizer at Toxics Action Center, a Boston-based nonprofit, is doubtful that these hearings will amount to anything significant.

“That engagement needs to be followed up by real and meaningful action and that’s still been pushed off to the end of the year,” she said. “I think a new administrator of the EPA is still going to be representative of the same executive administration and so I don’t anticipate it being a huge change from the status quo response around PFAS.”

An unregulated class of toxins

The class of chemicals was once heralded as a technological breakthrough in the 1950s for its ability to wick away water. Military bases, fire training academies and airports, for instance, use firefighting foams with PFAS to put out chemical fires. Firefighters wear PFAS-coated suits. Consumer products like ScotchGuard and Teflon can thank PFAS for their non-stick surfaces.

But starting in the 1980s, chemicals in the PFAS family, PFOS and PFOA, were linked to a host of health problems, from cancer to hormonal disruption. They are extremely difficult to get rid of because they do not break down in the environment and accumulate in the body. And while PFOS and PFOA are no longer manufactured in the U.S., other chemicals in the PFAS class replace them, and many are being revealed to have similar negative health effects. In its latest national study on environmental chemicals, the Centers for Disease Control and Prevention found measurable levels of at least 12 PFAS in the blood of study participants aged 12 and older.

The U.S. government has only recently begun tracking PFAS levels in the drinking water, with federal agencies lowering guidelines for the recommended maximum levels of two of the chemicals three times in the span of six years — from 200 ppt for PFOS and 400 ppt for PFOA in 2012, to 70 ppt for the chemicals combined in 2016. Most recently, the Agency for Toxic Substances and Disease Registry advised lowering those levels even further, to 7 ppt for PFOS and 11 ppt for PFOA. The new guidelines were informed by research indicating more and more disturbing health effects of PFAS, like developmental complications in fetuses, thyroid and liver damage, cancer, immune suppression and elevated cholesterol.

But PFAS remain unregulated and the guidelines are not the same across agencies or state borders. And with each new recommendation, millions of Americans have been left confused — and outraged — as to why their tap water is suddenly considered dangerous and what this means for their health.

A call to action in New England

Two-hundred PFAS-affected New Englanders, from firefighters to state representatives, gathered in Exeter, N.H. in June to share their stories with the EPA for the first time.

Nearly 50 people spoke in a session that lasted over three hours, despite the urging of EPA representatives to limit comments. When Jim Murphy, the EPA community engagement coordinator running the session, threatened to take the microphone away from speakers once they had used their allotted three minutes, a member of the audience shouted, ‘You do realize people’s family members have died, right?’ ”

That night, Andrea Amico told the EPA she worries for her children’s future because of PFAS contamination. Before sending her 12-week-old daughter to a daycare at the Pease International Tradeport, Amico, a founder of Portsmouth group Testing for Pease, did extensive research on the safest daycares in her area. She said when news broke that the water at Pease was contaminated, her heart sank. She had her whole family tested. Her daughter, who is now 7 years old, had the highest levels of PFHx, a PFAS, at 11 times the national average. 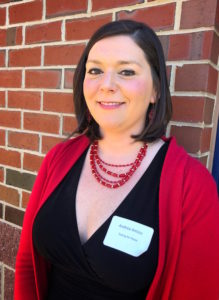 Andrea Amico, mother of two, feels immense guilt after learning her children were exposed to PFAS at their daycare on the Pease International Tradeport. (Photo by Paige Williams)

“This situation has really robbed me of some of my happiness as a mother, as a person, and that’s something that I can never get back,” Amico told the EPA. “I live with guilt every single day that I made the decision, unknowingly, that contaminated my children … and now I have to worry for the rest of my life, what is the impact on their health over time?”

Kristen Mello also presented at the event, representing Westfield Residents Advocating For Themselves. At the time, Westfield was in the middle of a budget crisis as the city council wrestled with whether to install expensive filtration systems or thousands of feet of pipeline to connect to another city’s PFAS-free water. After three attempts, the city settled on a $13 million bond for filtration.

“Without the EPA declaring a Maximum Contaminant Level or classifying PFAS as hazardous substances, Westfield residents have no legal framework to require that polluters pay to remediate the City owned land and water they have contaminated,” Mello wrote in an email.

Affected communities have found allies in U.S. Senators Maggie Hassan and Jeanne Shaheen, of New Hampshire, who actively called on Scott Pruitt to classify PFOS and PFOA as hazardous substances. They have continued to press Wheeler, too. “It is imperative that the change in leadership at the EPA does not interrupt the agency’s efforts to protect our citizens from further contamination, efforts that still need to be strengthened, expanded, and accelerated,” they wrote in a letter to the acting administrator in July.

As the EPA considers enforcing a national cap on PFAS in the drinking water, state representatives and health departments have acted independently and introduced stricter guidelines within state borders. In July, Vermont announced an emergency rule to regulate PFAS, capping them at 20 ppt in the water supply. Massachusetts’ Department of Environmental Protection has issued a recommendation of 70 ppt for the cumulative amount of five different PFAS chemicals.

While Chris Clark waits for federal action, the Timme-Laragy Lab is uncovering more evidence of the concerning health effects of PFAS. As a research assistant, Clark helps administer doses of PFOS and PFBS to Zebrafish, which are often used in toxicity research for their genetic similarity to humans. 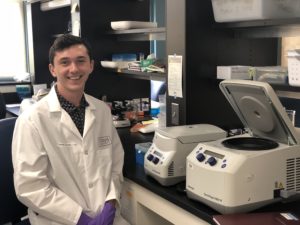 Every time the lab comes across new data about what PFAS can do to the human body — like their association with diabetes — Clark said he sits up at night thinking about how these data are relevant to someone in his home community, his own family and his own body.

“My mother was drinking this water when she was pregnant with my sister. Not only was my mother exposed and my sister exposed, but any future children that my sister would have are also exposed,” he said. “There’s never been a time in our lives when we’ve been PFAS-free.”

Generations of the Clark family have been drinking Westfield water and seen a score of health problems that have been linked to PFAS chemicals.

“I can’t say that it’s because of PFAS that caused the cancer of my father and the sicknesses that my uncle had or the thyroid disease my grandmother was recently diagnosed with,” Clark said. “But, it’s not safe to say that it wasn’t caused by that either.”