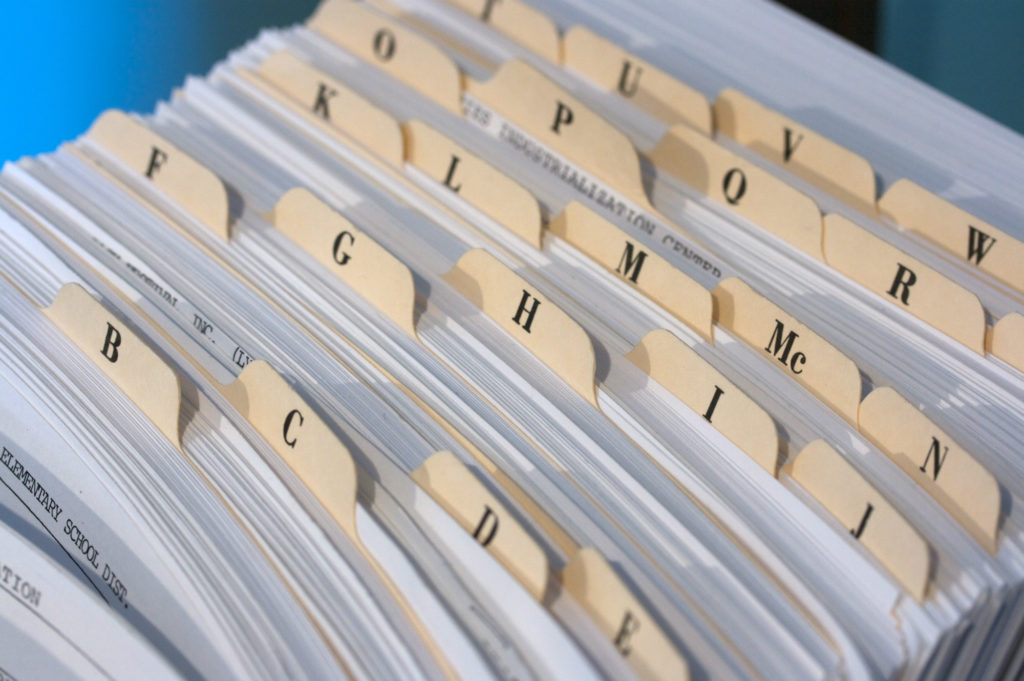 If public information requests make you think of endless documents in manila envelopes, fear not. We have some tips for crafting and following up on your public records request. (Marcin Wichary/Flickr Creative Commons)

Maybe you’re intimidated by the whole process because you’ve heard about fellow journalists’ horror stories. But think about the news organizations, big and small, that use public records regularly to hold the state accountable. (There’s a whole curated list on the Investigative Reporters and Editors Extra Extra blog.)

Shawn Musgrave is an investigative reporter whose work has appeared in The Boston Globe, Vice and Politico. He’s written on the intersection between law enforcement, technology and privacy. He started out as an intern and reporter at MuckRock, a journalism nonprofit that publishes investigative pieces and helps people file public records requests. Shawn has filed many public information requests from municipal, state and federal agencies for his stories. He has the following tips.

*Be advised: Every state has its own public information laws. The federal Freedom of Information Act governs federal agencies. You should understand which jurisdiction the agency you’re seeking information from is in, and which exact statute governs a public records request.

“Doing the research to figure out what exists will help you avoid run ins and confusion with the [public records] clerk,” Shawn says. “If you have a particular government citation, that can help. A lot of times, I’ll find the policy or the law that requires a certain record to be kept in the first place, so that provides you with a description of what you’re after. There’s a law for instance in Massachusetts that requires police to keep a log of every arrest that is made each day. So I just ask for that log.”

The document you’re asking for doesn’t have to be as specific as a particular MOU between a state entity and a private contractor. It could be a broader request says Shawn, as long as the request is framed discretely. “That could be all emails sent to the mayor from the police chief for the past two weeks. It could be a spreadsheet of all 911 calls for the Fourth of July,” Shawn says.

Usually documents related to how taxpayer money is spent is a safe bet to start if you’re trying to figure out what kind of information exists about a particular topic. You can see examples of FOIA requests Shawn has filed, from the broadly discrete to the specific.

2. Always include the statute in your request

Once you’ve figured out what exactly it is you’re requesting, you need to craft your request. The request should always include “a very clear description” of the documents you want and the public records statute which governs the request. “Citing the statute transforms this from an email that you’re sending to a government agency to a formal, legally enforceable public records request that triggers legal obligations on the part of the agency that you’re talking to,” Shawn says.

You can use the boilerplate language such as “Pursuant to the [state/federal public record statute], I hereby request the following records:”

“Put that statute in as many places as you can: in the subject line of the email, sprinkled throughout the body of the email,” Shawn advises. “Make it unmistakable that it’s a public records request.”

So you have to know the law to make sure it’s being followed, and know what your recourse is if you are feeling obstructed. “The laws are being updated, not to mention the case law, so you need to get your foundation of knowledge up,” Shawn says.

“Some of the common ways that clerks can screw up a request, whatever their motivation, is charging high fees or trying to charge high fees…and [they can] delay,” Shawn says. “Some laws give the requester leverage to push back on processing times that don’t seem reasonable.”

Most laws require a response within a certain amount of time, and provide legal recourse for the requester if the request goes unfulfilled within that period of time.

A lot of things could not go your way. The clerk might tell you it will cost thousands of dollars to fulfil your request, or the records may be heavily redacted, or your request may just be straight up denied. In those cases, you can appeal. But you have to decide whether it’s an effective use of your time and money to pursue a legal process to get the documents.

“It often comes down to money for me,” Shawn says. “I’m an independent reporter. Even if I were in a newsroom, very few newsrooms are willing to shell out thousands of dollars.”

5. Find the Information through other avenues

Sometimes, it might be that the information is already out there. Another organization may have already requested and received the information you’re looking for. While you’re reporting and making contact with sources, you may find that they are willing to give you the information.

“I will typically go ahead and put my public records [request] in and then try and acquire the records by other means,” Shawn says. “Those are not exclusive to each other, and I wish I had learned that more quickly. FOIA is not like going on Amazon and picking what records you want and getting the info right away. It’s a long process, agencies get a lot of these, or they don’t have much staff, or the records you’re trying to get at are tough to locate or require lots of review – and in the interim you can try to get those records by other means. That’s just the reporting process.”