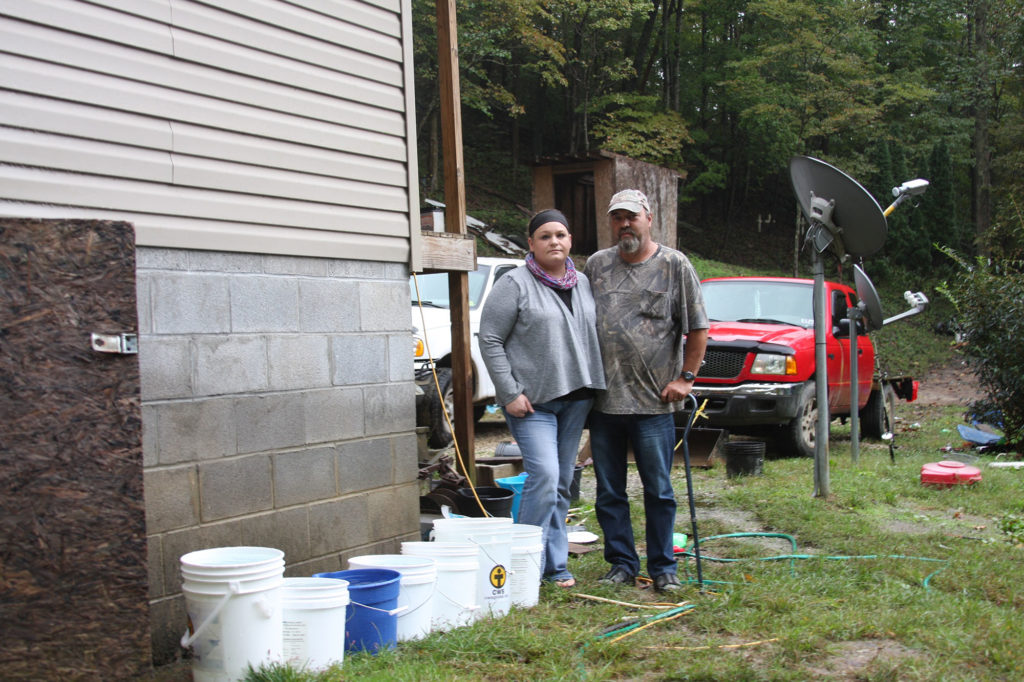 For "Stirring the Waters" Will Wright interviewed dozens of residents like Jessica and Tim Taylor of Martin County, to understand their distrust of the water system (Photo by: Will Wright/Report for America)

This column appeared originally in Report Local, a monthly newsletter from Report for America that highlights the work of RFA corps members and significant local journalism from around the country. Sign up here and subscribe to Navigator here.

We usually feature the advice from academics and experienced journalists, but for this installment we wanted the perspective of an emerging reporter reflecting on the work he has done recently and offering his own tips.

Will Wright is a Report for America corps member who works at the Lexington Herald-Leader. This week GroundTruth and its partners published Stirring the Waters, a collaborative project about water access in Appalachia that Wright reported alongside fellow corps members Molly Born (of West Virginia Public Broadcasting) and Caity Coyne (of the Charleston Gazette-Mail).

Wright answered a few questions about his work as a local journalist and how he is able to approach sources in an area where journalists are often seen with suspicion.

1) What’s your favorite part about being a local reporter? Any specific encounters stand out to you as moments where you knew your presence was helping the community, or where you made a special connection?

I think the thing I like most about reporting is meeting so many different kinds of people. I’ve been lucky enough to interview people from all different walks of life: politicians, coal miners, entrepreneurs and everyone in between. Those people have allowed me to learn so much about the nuances of this region’s economy and culture, and they make every day interesting. I wrote one story about a military project to provide free health clinics and eye exams to people who couldn’t otherwise afford them. While it wasn’t anything groundbreaking, I did hear from folks who read my story and later went to the clinics for the services. It may be small, but knowing one story can help someone get a new pair of glasses is a cool feeling.

2) In an era when attacks on the media’s integrity are increasing, what are effective ways you’ve learned how to build trust with sources and residents within your community?

I’ve found that most people are happy to talk to reporters about their own experiences. I know there’s plenty of animosity toward the press, but I still think people generally value it. One way I like to break the ice here is to talk to people about hunting and fishing. It’s a good way to find common ground and make people feel comfortable. Plus it’s helped me find some good new fishing spots.

3) As one of the first RFA corps members, what has your experience so far taught you about the role journalism can play as a public service?

I’ve always believed that journalism is a public service. There are so many good reporters out there, at the Herald-Leader and elsewhere in Kentucky, who prove that every day. Reporting on local and state government, writing features about everyday people doing great things, and keeping a watchful eye over powerful industries all help our world move forward. If I can play any part in that public service, I’ll be one happy reporter.

4) Earlier this year, you covered a major story about a lack of water access in your region of eastern Kentucky. Since then, the state has announced it will invest millions to address the system. What has the community response to the story been like?

The water issues here have been reported on long before my arrival. Many outlets, including the Herald-Leader and the local newspaper, the Mountain Citizen, have written about water quality and reliability issues in Martin County for years. The Herald-Leader has reported similar issues in other counties as well.

As the water crisis there unfolded — and continues to unfold — I’ve been able to meet with dozens of residents who have had to live without access to reliable running water. I went to community meetings and developed relationships with both water district officials and customers. Just being here, on the ground, I think makes a big difference.

Many of the people I’ve met have been appreciative of my reporting. Some local activists and residents have been so welcoming — they’ve let me into their homes, gave me news tips and connected me with people bearing the brunt of this water crisis. I’m sure not everyone has been happy with my reporting (the water issue is a divisive one within the county), but I think most people want their voices to be heard. It’s a good feeling to know I can help them do that.

5) Your work as an RFA corps member involved re-opening the eastern Kentucky bureau for the Herald-Leader. What’s the community’s response been to having a journalist pay attention to local issues?

It’s kind of hard to say what the community’s response has been because I cover such a large area. In Pike County, for example, I know I’ve written about some issues that definitely matter to people here. One that comes to mind is a story I wrote about Fishtrap Lake, a popular fishing and boating destination here. Every spring, loads of trash flood into the lake and pile up around the dam. It’s unsightly, to say the least, and has hurt the owner of the lake’s sole marina.

That’s one of those stories that I hope leads to some real impact. People here, including me, love that lake and want it to be clean. It may seem like a small thing, but those basic quality-of-life issues, like having nice places to get out and recreate, mean a lot to people. I met some folks here who said they read that story and were glad it ran (they were, though, skeptical that it would lead to real change).

6) At a time when news deserts are blossoming, what role do you think local journalists can play in the larger media landscape?

This goes back to the role of journalism as public service, but I think just having quality reporters in communities makes them stronger. The presence of multiple news outlets means there’s more space to tell people’s stories that might otherwise go untold. I think there are a lot of stories that are local, but that have implications for communities elsewhere. I’m sure the Flint water story, for example, prompted news outlets across the country to take harder looks at their water systems.