Timeline: What the world can learn from South Korea’s COVID-19 response 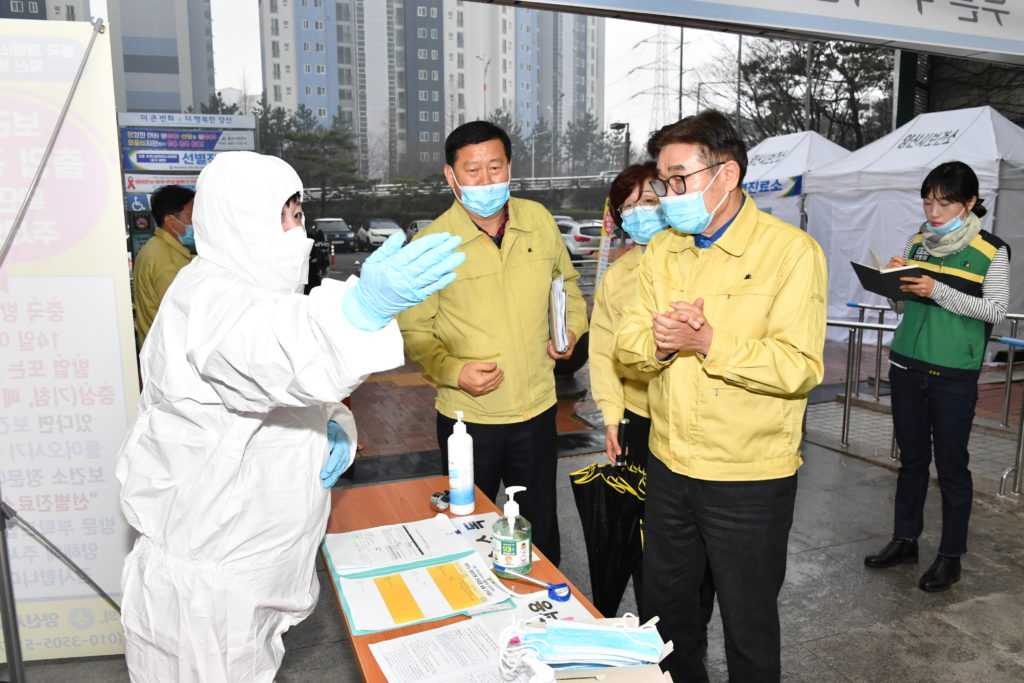 An inspection center in the South Korean city of Yangsan on February 12, 2020. (Photo by the government of Yangsan)

SEOUL — On the last day of 2019, the World Health Organization’s China Country Office became aware of a new virus that was identified in a small cluster of people in the eastern city of Wuhan, home to roughly 11 million people. Less than two weeks later, Chinese scientists shared the new virus’ genetic sequence with the rest of the world.

At the time, most people had no idea that a major outbreak would sweep much of the world, infecting some 105 countries and killing at least 3,809 people (find the latest situation update from the WHO here), according to an online tracker that pulls data from multiple government sources. But in South Korea, several private firms were quietly but rapidly developing testing kits. They worked with the government to expedite the accreditation process, turning a year-long procedure into one of mere weeks — and they stocked back rooms with a supply of kits that later became critical to the survival of many patients.

The rest of the world can learn a lot from South Korea, home to the third-largest outbreak of the novel COVID-19 coronavirus. Though the country has more than 7,513 cases as of the evening of March 10, it has the lowest death rate in the world — just 0.69%, or 54 people.

To understand how Korea responded to the virus’ spread, here’s a breakdown of what happened in South Korea, from the virus’ slow start to an explosive rise in cases — and how Seoul managed to navigate a massive outbreak that is just now taking root in the Western world.

Timeline of the outbreak

South Korea detects its first-ever case of the COVID-19 novel coronavirus: a 35-year-old Chinese woman. Three days later, the first South Korean national — a 55-year-old man who went on a business trip to Wuhan — was detected.

South Korean news organizations quickly began tracking each individual case of the virus and the path that those with a confirmed diagnosis took through the city. By the end of the month, only 11 known cases were reported to the public, and much of the collective blame from the South Korean public seemed to fall on China.

At the time, anti-Chinese sentiment seemed strong: More than half a million South Koreans signed a petition on the Presidential Blue House website calling for a ban on all Chinese travelers. Local news media began reporting on businesses with signs posted on their doors saying “No Chinese” or “No foreigners,” and trolls repurposed the “No Japan” boycott logo to say “No China.”

North Korea reportedly began sealing its Northern border with China, barring visitors from entering the country. Though the country had recently invested heavily in a resort town and hot spring spa to generate revenue from foreign tourists, North Korea likely decided to seal its borders because of its poor medical infrastructure, which could easily become overwhelmed by an outbreak.

An anonymous, middle-aged woman known as “Patient 31” tested positive for COVID-19 in South Korea after developing a fever. As a member of a fringe church called Shincheonji Church of Jesus — which has a self-reported membership of roughly 200,000 worldwide — Patient 31 incidentally spread the virus to dozens of other Shincheonji congregants in the Southeastern city of Daegu.

This quickly caused a massive outbreak. Within days, Patient 31 became known in South Korean media as “Super Ajumma” for spreading the virus to so many others (a play on the word “ajumeoni,” which is a title of respect normally given to middle-aged women). News organizations also began reporting that Patient 31 had originally refused a coronavirus test, though she later denied these allegations in an interview.

In a matter of three days, South Korea’s confirmed coronavirus cases multiplied more than six-fold, from 31 to 204 by Feb. 21. Less than two weeks later, the number of cases surpassed 6,000, according to the KCDC.

“It was a bit of a shock when we got Patient 31, and it was a bit crazy watching it all escalate from there,” said K. Roberts, a 31-year-old English teacher living Daegu. “But I think [South Korea] has been doing the best it can to deal with this.”

South Korea reported its first death from the COVID-19 coronavirus.

The U.S. Centers for Disease Control and Prevention raised its travel warning for South Korea to Level 3, the highest possible ranking.

“CDC recommends that travelers avoid all nonessential travel to South Korea,” a statement read. “There is limited access to adequate medical care in affected areas.”

Around the same time, countries began banning or restricting the entry of South Korean citizens. As of March 4, at least 91 countries have done so.

South Korea began opening “drive-through” testing centers, gas station-like facilities where people can get their noses or mouths swabbed for free while still sitting in their car. Those who are tested for COVID-19 at these fast food-like pull-ins receive a text-message update with their test results in less than three days.

More than 210,000 people have been tested for coronavirus in South Korea as of March 10, including at drive-through centers, according to the South Korean Ministry of Health and Welfare.

Lee Man-hee, head of the Shincheonji Church, held a press conference in Gapyeong, South Korea, apologizing for the religious institution’s involvement in the spread of the virus. He wore a face mask and bowed to the ground twice to show his respect.

“We do feel responsibility for the massive number of infections of the virus and do our best to support the government-led disease-control measures with all our resources,” Shincheonji later said in a statement, followed by a promise to donate $10.1 million to recovery causes. “We pray for the quick stabilization of the situation and the recovery of all patients.”

North Korean leader Kim Jong Un broke months of silence from inter-Korean talks by sending a letter to South Korean President Moon Jae-in. The letter, full of well-wishes, expressed concern for Moon’s well-being in the face of South Korea’s COVID-19 outbreak, as well as regret that North Korea could not do more to help. Moon reportedly penned a response back to Kim the following day.

Some experts have speculated that Pyongyang is laying the groundwork for a later plea for international aid, if confronted with an outbreak. Currently, the North claims to be free of COVID-19.

“It’s obviously a positive sign that they’re talking to each other and engaging. Instead of being abusive, the North Korean administration is saying something nice,” said Peter Ward, a North Korea analyst based in Seoul. “But something about this does seem to indicate that the corona situation is worse than they’re letting on.”

The South Korean government vowed to improve its distribution of protective face masks to medical staff as well as the South Korean public. It also announced that it will ban the exportation of face masks and require face mask producers to report their sales volumes to the government, a means of dealing with price-gouging and nationwide shortages.

Just days earlier, the government began selling face masks at public post offices for less than $1 and limited the sales to just five masks per person. So far, the South Korean government has supplied at least 4.5 million masks through public organizations, according to The Korea Times.

South Korea continues to battle its COVID-19 outbreak, with confirmed cases of novel coronavirus continuing on a daily basis. However, medical experts believe that the worst of the outbreak might be over: Only 69 new cases of the virus were reported on March 9, amounting to the lowest rate of increase in 10 days.

“I’m still extremely cautious, but there’s hope we can reach a turning point in the near future,” Prime Minister Chung Sye-kyun told reporters. As of March 9, more than 196,000 people have been tested for COVID-19 in South Korea since the beginning of the outbreak, while 166 people have fully recovered.

Hwang Seung-sik, a professor and spatio-temporal epidemiologist at Seoul National University, said that South Korea’s gameplan has largely shifted from attempting to contain the virus to treating those who are at most risk of dying from it. Since the majority of South Koreans who tested positive suffer only mild symptoms, many have been directed to treat themselves at smaller clinics while major hospitals focus on the most severe cases.

“Hospital doctors will put their efforts more on severe patients, and mild patients will be treated in local health centers,” Hwang said. For the rest of the world, he offered one piece of advice:

“It is up to other countries whether or not they will test patients, but it is impossible to contain the virus by locking down certain cities or isolating people, given the experience in Korea,” he said. “We tried hard to prevent the entry of COVID-19 from outside of Korea, but we found out that, in reality, people can be infected asymptomatically and still spread it.”