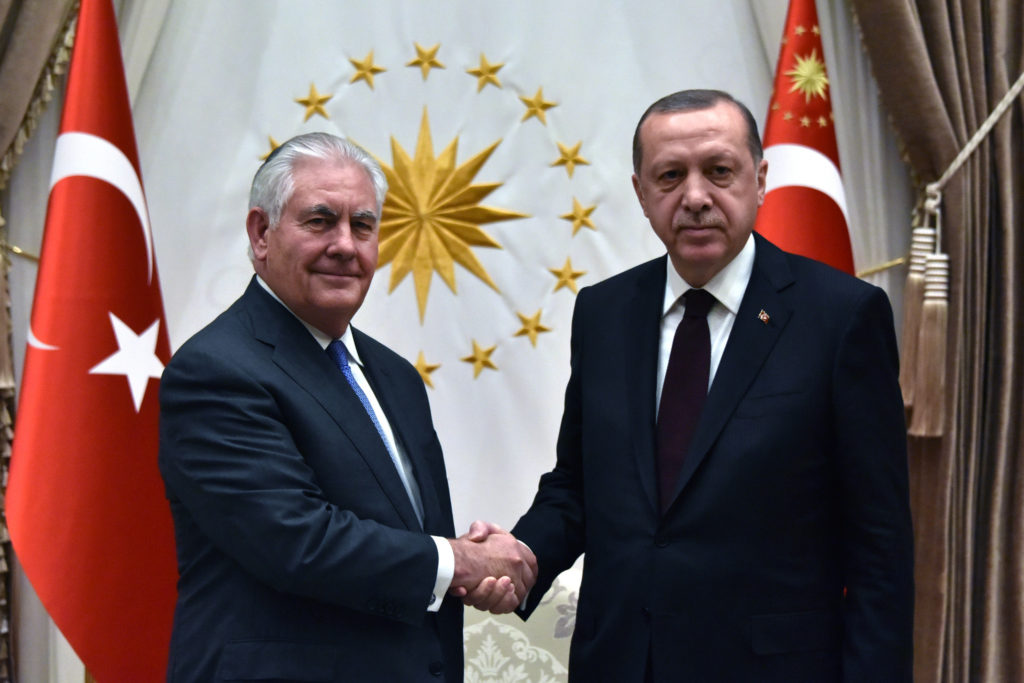 When United States diplomats travel to foreign countries and meet with high-level officials, it’s standard practice — and common sense — that they bring their own team, including a translator. Accurate communication is, after all, the key to effective diplomacy. But this administration does things differently.

When Secretary of State Rex Tillerson arrived in Turkey last week to help patch a rocky relationship with the contentious NATO ally, he held three and a half hours of tough discussions with Turkish leaders without his own translator or policy aides — a breach of protocol. In fact, he relied on Turkish President Recep Tayyip Erdogan’s foreign minister Mevult Cavusoglu to translate.

“This is ridiculous. It’s a tense relationship with serious lives at stake, and the U.S. is showing that they don’t care,” said a former State Department official, speaking by phone from Washington D.C. She seeks anonymity for fear of professional retribution in the capitol. She resigned last year in protest of what she calls “a total abandonment or regard for humans rights and democracy promotion.”

She’s not alone. Tillerson has been criticized for what is seen as a dismantling of the State Department in the midst of declining morale and a hemorrhaging of top talent who believe President Donald Trump has abandoned the protection of civil liberties not only abroad, but at home. According to the American Foreign Service Association, sixty percent of top-ranking diplomats in the State Department have left and applications to join the corps has fallen by half.

“Just last week Erdogan implied that the U.S. government are terrorists [for aligning with Kurdish forces in Syria], yet Tillerson can’t be bothered to show up with his own translator,” the former State Department official continued. “What does that say about our standing in the world?”

As Erdogan tightens his autocratic grip on Turkey, it’s becoming increasingly clear that the country isn’t intimidated by the U.S. On the same day as Tillerson’s meeting with Erdogan, a Turkish court sentenced six defendants, including three prominent journalists, to life in prison over allegations of involvement in a 2016 coup attempt, drawing fierce condemnation from the UN and press freedom advocates.

The convictions followed a months-long trial during which the prosecution alleged that the journalists sent “subliminal messages” urging the overthrow of Erdogan’s government, and that they maintained contact with members of the Fethullah Gülen network, a movement widely believed in Turkey to have orchestrated the coup attempt. Gulen resides in Pennsylvania under self-imposed exile. Erdogan has continuously called for his extradition.

According to the Committee to Protect Journalists, at least 73 journalists remain behind bars as of December 2017. Turkey jails more journalists than any country in the world.

What’s more, this week a Turkish court sentenced Omer Faruk Gergerlioglu, one of the country’s leading human rights advocates and one of Erdogan’s leading Islamist critics to two-and-a-half years in jail for “disseminating terrorist propaganda.”

In 2016, he posted a photograph of a World Peace Day demonstration featuring Kurdish mothers protesting behind two symbolic coffins, one covered in the Turkish flag and the other in a Kurdistan Workers’ Party (PKK) flag. The photograph, by all indications, advocated peace.

Still, aside from characteristically weak statements from the U.S. State Department expressing “concern” over human rights abuses, including the recent sentencing of a dual U.S.-Turkish NASA scientist, the U.S. remains mum.

The silence echoes across the world amidst a rising tide of populism.

A few days before meeting with Erdogan, Tillerson met with Egyptian president Abdel Fattah El-Sisi in Cairo. He expressed support for the autocratic leader, known to be even more repressive than ousted President Hosni Mubarak. Nevermind that many secular and Islamist activists who were part of the 2011 uprising have been jailed or killed.  Last year, Trump called Sisi a “fantastic guy”  and complimented his shoes.

Next month’s presidential election in Egypt is nothing more than a sham and will likely reinstall Sisi for another four years. Any candidate with one iota of support has either been arrested or intimidated into dropping out of the race.

Back in Turkey, at a joint press conference, Tillerson seemed to have pulled relations with NATO ally Turkey away from a “crisis point” over divergent interests in Syria by portraying a unified front.

Foreign minister Cavusoglu said the two countries had created a “mechanism” for further talks and would meet again by mid-March to further massage their differences. Activists hope that a human rights review will be a part of that mechanism, but they’re not holding their breaths.

While Tillerson mentioned that the United States had serious concerns about local employees at its missions in Turkey and called on Ankara to release a US pastor and other Americans detained in Turkey, activists say business will remain as usual.

“There’s no will to correct Erdogan,” said an Istanbul-based Turkish activist, seeking anonymity for fear of being arrested. Just three years ago, the activist had no concerns speaking to press, but he says the tide has now changed and “no one is safe.”

Indeed, with a president championing an insular America First agenda, paying no mind to human rights abuses or autocracy abroad — let alone in his own country — leaders abroad know they have nothing to worry about. Why fear jailing your own journalists when the president of the free world rants almost daily about the dishonesty of the media?

For Fatih Yagmur, a 32-year-old, award-winning Turkish journalist who fled Turkey shortly after the coup attempt, things will get much worse in Turkey before they get better.

Yagmur spent most of the last couple years holed up in a hotel room in an undisclosed African country before he received asylum in Germany. In 2013, Yagmur had already attracted the anger of the Turkish authorities with his stories on corruption allegations against the government. He received more criticism after the coup attempt and knew he’d end up in jail like so many of his colleagues if he didn’t flee the country.

“Fatih Yagmur’s plight is a chilling illustration of the devastating impact of the crackdown in Turkey on journalists and journalism,” says Jo Glanville, director of English PEN, an association defending freedom of expression.

“In other countries, a journalist of Fatih’s caliber would be rewarded; in Turkey he has lost his job and been driven into exile,” she said. “It’s a shocking indictment of the Turkish state’s treatment of journalists as criminals rather than watchdogs of democracy.”

Serkan Golge, a NASA scientist and dual American-Turkish citizen, was sentenced this month to more than seven years in Turkish prison on trumped-up terrorism charges. He was caught in a government dragnet as he and his family prepared to head home to Houston following the 2016 coup attempt.

His wife Kubra sold their beloved house in Houston and remains in Turkey, raising their two sons in a country that feels increasingly unlike their own. Tillerson called for Serkan’s release during his remarks in Ankara but Kubra is not hopeful.

“There is no alternative but to accept the way things are,” she says, still reluctant to openly criticize the government. “We aren’t terrorists, we love our country.”