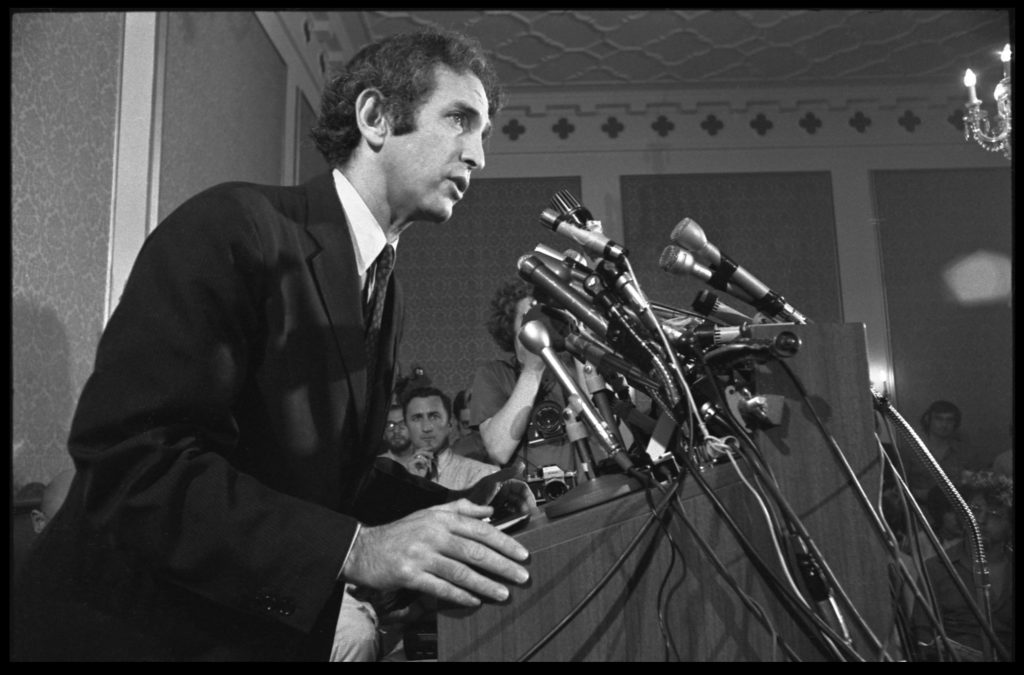 Ellsberg leaning into the podium, speaking at a press conference following the Supreme Court decision to allow publication of the Pentagon Papers, July 1, 1971. (Photo by Jeff Albertson, courtesy of the Daniel Ellsberg Papers Collection at UMass Amherst)

KENSINGTON, California – As a thick morning fog was still lifting over the hills here above the San Francisco Bay, Daniel Ellsberg sat at his dining room table, sipping a cup of coffee and reading The New York Times.

The legendary whistleblower who released the Pentagon Papers a half-century ago is 88 years old now. He risked serving 115 years in prison to expose a pattern of official lies about U.S. involvement in Vietnam. In 1971, as the documents were published, he didn’t realize he would also set in motion the case for impeachment against President Richard Nixon. And earlier this month, on the morning of December 13, Ellsberg shook his head as he went through the day’s headlines:

In an interview with GroundTruth, Ellsberg shared just how many parallels there are between the news of today and 50 years ago when he released nearly 7,000 pages of top-secret Department of Defense documents about the U.S. involvement in Vietnam from 1945 to 1968.

Ellsberg said, “Reading the paper, I feel like I’m reliving many moments of my past life … Mostly in not reassuring ways. And in a couple of possibly hopeful ways.”

In a home lined with packed bookshelves, with a basement full of overstuffed cardboard boxes of his own papers that he is in the process of turning over to the Special Collections at the University of Massachusetts Amherst Library, Ellsberg spoke of his life and times with stunning clarity and detail in a wide-ranging interview comparing Nixon to Trump, Vietnam to Afghanistan, the Vietnam-era court martial case against the US Army officer at the center of the Robert Rheault case to Gallagher, and the role of the whistleblower then and now.

For the epilogue of our Democracy Undone: The Authoritarian’s Playbook series, we spoke with Daniel Ellsberg about the importance of whilstleblowers and other institutional safeguards to defend democracies from those who seek to undermine them.

Ellsberg also spoke of a strong sense that liberal democracies are under attack in many corners of the world, and that in some ways the current times feel more perilous than a half century ago in terms of the erosion of not only democratic institutions, but of the very notion of truth itself.

He said the steady erosion of democracy and of truth was happening in “all the places that Trump admires: The Philippines, Brazil, Hungary, Russia.”

“I’ve seen the examples,” he said. “And that’s a totally dangerous and deplorable situation that must be resisted.”

Hearing Ellsberg’s analysis of today’s news provides a sweeping narrative of a half century, and a set of comparisons between then and now that profoundly informs the moment we live in.

Today it is Afghanistan, back then it was Vietnam. Today it is Trump facing impeachment, back then it was Nixon. Today Gallagher is in the news for war crimes in Iraq, back then it was U.S. Army Special Forces Colonel Robert Rheault, who was the commanding officer of the unit responsible for the alleged extrajudicial execution of South Vietnam double agent Thai Khac Chuyen on June 1969.

The scandal, known at the time as the “Green Beret Affair” captured the attention of the public and prompted many of the same questions about the extent of the rules of engagement in the military and how far its leaders are willing to push them. As stunning as the comparisons are between Vietnam and Afghanistan, between Nixon and Trump, it was actually the haunting similarities between the Rheault and Gallagher court martial cases that were the focus of Ellsberg’s attention as he read the newspaper headlines on this morning.

As a former Marine platoon leader, Ellsberg was deeply offended when President Nixon, who never served in war, leaned on the military to drop a court martial case against an officer who had done what Ellsberg felt was a complete betrayal of the military’s code of conduct. It was the Rheault case that Ellsberg said actually propelled him to finally take the step to photocopy and eventually release the Pentagon Papers to the Washington Post and then to a series of newspapers creating a landmark Supreme Court ruling on the First Amendment rights of a news organization to publish government documents.

Speaking of the Gallagher case and Trump’s decision to rescind the demotion in rank ordered by his superiors, then trot Gallagher out at political rallies, Ellsberg said, “That was an exact reproduction of the situation that led me to copy in the Pentagon Papers 50 years ago.”

When he read about Trump pardoning Gallagher, he said, “That enraged me as a former Marine who had taught laws of war and who had been a rifle platoon leader and walked with troops in combat in Vietnam. I had a very strong commitment to the idea of just war and just means in war. Military honor demanded this,” he said.

When Ellsberg first read about Rheault in 1969 and Nixon’s attempts to thwart the court martial, he remembers, “I said to myself this is the system for which I have worked, a system that lies from bottom to top —from a warrant officer up through generals and the Secretary of the Army and the president lies to conceal murder. And I will not be a part of this anymore. I said to myself, In my safe I have got 7,000 pages of lies and deceptions that amount to mass murder … I said I won’t be part of this any more and murder is not something to be just stopped, but exposed and resisted. So I went to my friend Tony Russo and said, ‘Do you know where we can find a Xerox machine?’”

It would take another two years for The New York Times and then the Washington Post to finally publish the Pentagon Papers, and during that time Ellsberg was twisting in the wind as a whistleblower. And he said his experience and anguish in the risks he took allow him to understand what whistleblowers go through.

The whistleblower who came forward over the summer to expose President Trump’s now famous phone call with the president of Ukraine, which formed the basis for impeachment proceedings against Trump, used the cover provided by the Whistleblower Protection Act, which did not exist in 1971 when Ellsberg came forward.

But Ellsberg pointed out that while the protections helped the whistleblower they didn’t stop government officials from trying to cover up the information.

“The White House, in violation of the act, kept that complaint from going to Congress. Only whistleblowers acting without authorization, not through channels, who told Congress that the complaint existed and they should ask for it and issue subpoenas. We wouldn’t have it otherwise without those people,” said Ellsberg.

Ellsberg privately shared what he believes is the name of the whistleblower who set in motion the case to impeach Trump, and talked about the dangers this current whistleblower is likely to be facing, dangers Ellsberg said he knows well as he received death threats himself and efforts to discredit him by Nixon. Ellsberg said there are pros and cons for media organizations considering releasing the name, but the threat of harm to the whistleblower is the overriding concern at this point. [After the interview, President Trump himself retweeted a mention of the whistleblower by name, a tactic that was widely criticized and which legal scholars claim violated the Whistleblower Protection Act.]

In the aftermath of the release of the Pentagon Papers as Ellsberg’s name was made public, he turned himself in and faced trial for nearly two years on charges of espionage, but the judge eventually dismissed the case due to government misconduct by the Nixon administration.

As the interview concluded, Ellsberg sat with his wife Patricia while the morning fog cleared and the view from their hilltop home opened up through the trees. Ellsberg didn’t want the conversation to end before he had a chance to share a sense of hope that pervades his thinking then and now, a firm belief that even if a whistleblower’s actions feel small in comparison to the enormity of the injustices occurring around then, one must persevere with a conscience and a belief that the truth matters and the truth is what can set us all on a path toward justice.

“Don’t do what I did. Don’t wait until bombs are falling, until thousands more have died before you go [forward with information],” Ellsberg said. “If you have information that we are being lied into a wrongful war or a violation of the Constitution, don’t wait, as I did to go to the press and Congress with documents and put those out at whatever personal cost. I said the course will likely be very severe. But a war’s worth of lives may be at stake.”

Listen to the podcast season “Democracy Undone: The Authoritarian’s Playbook.”

Correction: It was previously stated that Daniel Ellsberg was 89. He will be 89 in April 2020.

Correction: This story has been revised to reflect that it was the 1969 reports of the Robert Rheault case, also known as the “Green Beret Affair,” and not William Calley’s case, known as the My Lai massacre, which triggered Daniel Ellsberg’s decision to start photocopying the Pentagon Papers.