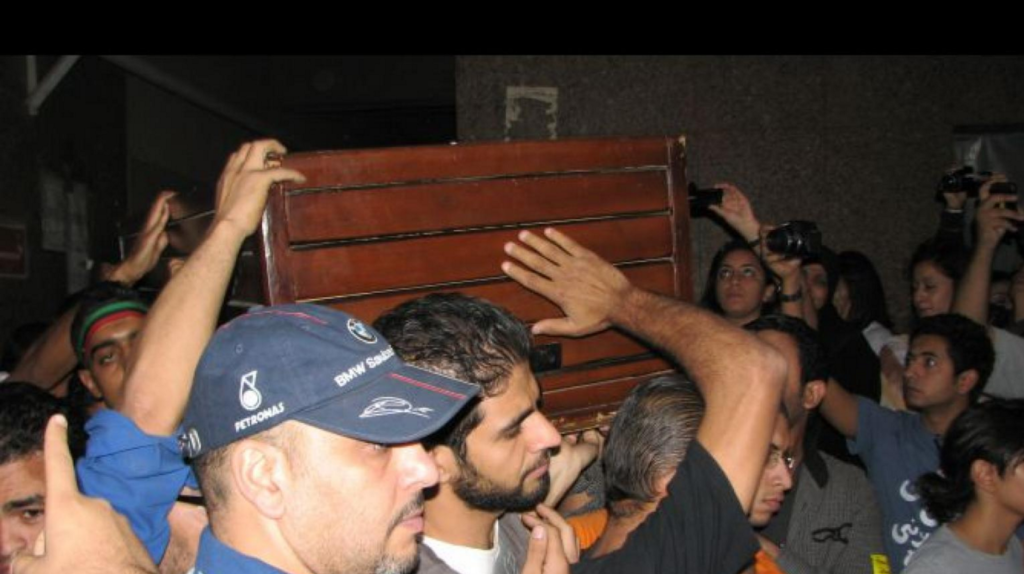 CAIRO — The scene outside Zeinhom Morgue in the downtown Cairo slum was chilling on Friday afternoon as dozens of angry protesters mourned as they awaited the body of 24-year-old Essam Atta, allegedly tortured and brutalized by security officials in Tora Prison for smuggling in a SIM card to use in a cell phone.

“They took my son, my groom, they took him before his time,” mumbled Neama, Atta’s mother, as she walked sobbing down the dark corridor to

Essam Atta’s mother Neama speaks to press outside the morgue.

the back entrance of the dirty morgue.

Naema’s face was dazed as she spoke of her son’s death. She said she was was visiting him on Tuesday when prison officers stormed into the room, grabbed Atta abruptly, then took him into a bathroom.

“I screamed at them, tried to pull them away but they hit me and pushed me aside,” she said. “I saw them take the bedcover he used to sleep on and put it and they put it over the window of the bathroom where they tortured him,” she said, still sobbing.

On Thursday night, Atta was declared dead at Cairo’s Kasr el-Aini hospital. The Ministry of Information announced Atta was found “foaming around the mouth, suffering from fatigue and loss of consciousness” on Thursday and that the cause of the death was “drug poisoning.”

But his family and prison mates say he may have died as early as Tuesday night or Wednesday morning as a direct result of torture, not drugs.

For many Egyptians, Atta’s death is all too reminiscent of 28-year-old Khaled Said, who died at police hands in June 2010. Said’s death had sparked unprecedented protests that eventually led to January 25, when millions of Egyptians demanded the fall of Hosni Mubarak and his regime.

After Atta’s body was released from the morgue Friday evening, his family, along with dozens of protesters marched to Tahrir Square, where there were more than 20,000 other protesters demanding the fall of Field Marshal Mohamed Tantawi and his ruling military council, who assumed power after Mubarak was forced out of power in February.

After the prayer finished, the people rose simultaneously, angrily chanting: “The people demand the fall of the Field Marshal.”

“Sadly, I am here today to bring in another Khaled,” Marzouk said to a group of protesters in Tahrir as tears streamed down her face. “They cannot keep killing our youth and getting away with it. My faith is in you,” she said to the young people in the crowd.

Atta’s autopsy came out a few hours after his admittance into the morgue on Friday afternoon showing that he had died of “heart failure and internal bleeding.”

Neama said Atta’s prison mates had confirmed to the family what Atta had been relaying via an illegal cell phone: Their son was being regularly tortured by police officers at the prison.

Out of concern, Naema headed to Tora early Tuesday after not seeing Atta for over a month and a half.

His mother said she believes her son was tortured because he told his family of what was happening to him inside the prison walls.

“Before they took him, he was asking me to get him out of there, to file a complaint to the general prosecutor about what was happening to him,” Neama said.

Atta’s sister Hanan said, “He had told us while he was in prison that we should file a complaint to the Prosecutor General, but my father told him ‘No, son, if we do that, they might kill you.’”

Atta, who worked as a shoe repairman in his father’s small shop, comes from a low-income family that lives in El Basateen, a slum just outside of Old Cairo.

He is one of six children, and had been serving a two-year sentence in Tora Prison for “illegally occupying an apartment.” His friends and family contend he was an innocent bystander when arrested in February and the apartment charge was added later.

In their last visit with Atta, Neama said her son told he was tired of what was being done to him. He said he was consistently beaten, tortured, and mistreated.

The family could not easily afford the cost of transportation to Tora so cell phone calls were typically the only means of communication for weeks at a time.

One of Atta’s prison mates called Neama and her family on Thursday to let them know Atta’s body could be found at Kasr el-Aini hospital. They say they never got an official call from Tora Prison.

Aida Seif, a doctor and prominent Egyptian human rights activist at the Hisham Mubarak Center who was among the protesters, asked to oversee the autopsy process.

Seif said that since it was Friday, a national holiday, not all coroners authorized to conduct autopsies were present at the morgue.

“The doctors here today are only allowed to admit the bodies, they are not authorized or capable of doing a full, thorough autopsy,” she said.

“As I entered, I saw a dirty room, walls and floors stained with blood and not even a microscope they could use to examine,” she said. “They had already started cutting the body before I came in to observe and they did not examine each organ as one should in an autopsy.”

Seif said she saw they had already cut from his chin down to his esophagus.   “His esophagus was removed in placed in a jar, next to a rolled up swaddle of an unknown substance,” she added. “The doctors there were all incompetent, at one point one of them told me that I could roll up my sleeve and grab a glove to dig in if I wanted.”

The autopsy report reports no injuries to Atta’s face or body, except for a small exterior bruise to his right side. However a widely circulated picture taken after his death shows a very swollen face.

And Atta’s mother, sister, and father, who all saw him one last time after the coroners finished said that his face was bruised heavily and that he was bleeding from the side of his mouth.

“He looks so horrifying,” said his father, Ali Atta. “This is not the Atta I know, I don’t recognize him.”

The report also stated that a small capsule of hashish was found inside his stomach, a detail that echoes the case of Khaled Said.

Authorities had alleged that Said died from swallowing a wad of marijuana that he had tried to hide as the two officers approached him.

“What we are seeing now is Khaled Said number two,” said Seif.

Rampant torture cases in Egypt’s prisons and police stations were seen as one of the leading triggers of the country’s popular uprising.

At the time of his February arrest, Atta was rounded up and charged with “thuggery” with a group of bystanders as he stood to watch a fight that broke out, his sister Hanan told GlobalPost.

According to Atta’s family lawyer, Malek Adly, the family is filing a case to the Prosecutor General, accusing the officers at Tora Prison of torturing their son. They are also filing a case against the Ministry of Interior.

“The Ministry of Interior tried to sign off on his case, saying he died from drug poisoning and internal bleeding but they are not even legally authorized to do this because they are the accused party in the case of his murder,” he said.

“Every time someone dies as a result of torture, they try to frame him saying he died of drug abuse, but we won’t let this slide, neither will his family and neither will these people,” Adly said, pointing towards the group of angry protesters and activists outside the morgue.

Many Egyptian citizens and activists have been demanding that the military council, the Supreme Council of the Armed Forces (SCAF), hand over power to a civilian government immediately.

“The council is tainted by Mubarak,” said Nehal Adawy, a young teaching assistant at Ain Shams University who was protesting in Tahrir holding a photo of Atta’s brutalized face. “As long as the council remains in power, our lives as Egyptians are threatened.”

Adawy said she fears that under emergency law, which has been imposed on Egypt for 30 years and continues under the military’s rule, any civilian could be randomly arrested for petty crimes and tried in military courts, suffering the same fate as Essam Atta.

Since the military came into power, over 12,000 civilians have been tried in military courts, according to Human Rights Watch.

“We are all unsafe under military rule,” Adawy said. “We want SCAF to hand over power to a civilian council now.”

She continued, “What happened to Essam can happen to any one of us under emergency law, and it can happen to the 12,000 civilians imprisoned now under military rule.”