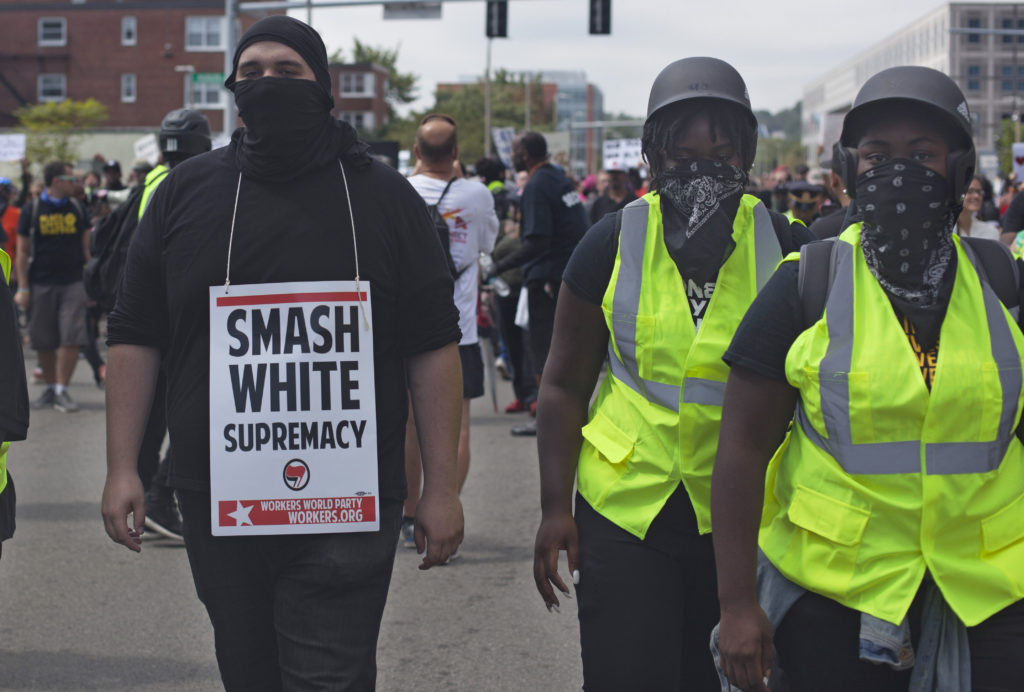 Counter protesters marching against the Free Speech rally that was held at the Boston Common on Saturday. The early guest list, which included well known alt-right speakers, mobilized counter protesters who saw it as a white nationalist rally. Rally organizers insist the event was to observe first amendment rights of people holding all view points. (Shay Horse/GroundTruth)

BOSTON — The demonstrator peeled off a rubber Barack Obama mask to reveal a shaved head and three facial tattoos above his goatee.

Identifying himself as John Doe, he said he came to Boston from Southbridge, Mass., to film the “free speech” gathering, which was overwhelmed by as many as 40,000 counter demonstrators Saturday — just a week after the deadly white supremacist rally in Charlottesville. As Doe offered support for President Trump’s response to Charlottesville, a crowd began to gather, calling him “Nazi scum.”

That’s when another man in a backward, green baseball cap stepped forward and landed a crushing left hook to Doe’s face, crumpling him to the ground.

While the heavily policed event was mostly peaceful, the confrontation represented a seething resentment against a burgeoning self-described “alt right” movement, a loose coalition of white supremacists and white nationalists, hosting events across the country. With national attention on the city, Mayor Marty Walsh unequivocally told event organizers, “We don’t want you here,” and Boston authorities took no chances in securing Boston Common.

Police separated the “free speech” rally from the counter-protesters by large barricades and restricted press from entering the rally, isolated to a bandstand. Event organizers said some of the speakers and attendees who had planned to join the rally were not let through the perimeter.

And Cambridge-based Republican candidate for U.S. Senate and rally speaker Shiva Ayyadurai said he and other attendees were falsely labeled as Nazis and white supremacists.

The night before the rally, “free speech” organizer John Medlar posted on his Facebook:

“Let me be clear,” Medlar wrote. “There is NO WHITE SUPREMACY RALLY IN BOSTON! The rally I’m helping to organize is about promoting Free Speech as a COUNTER to political violence like the horrible things we’ve seen happen in Charlottesville. There are NO WHITE SUPREMACISTS speaking at this rally. That was a baseless internet rumor that went viral because everyone’s emotions are so high right now.”

“We had a job to do. We did a great job. I’m not going to listen to people who want to talk about hate … If they didn’t get in, it’s a good thing. Their message isn’t what we want to hear,” Evans said.

Indeed few people came out to cause trouble — 33 people were arrested by the end of the day, fewer than the number arrested at the 2007 World Series celebrations.

“99.9 percent of the people here were here for the right reason,” Evans said. “And that’s to fight bigotry and hate.”

National security analyst Juliette Kayyem said that Boston police did “so much right” when preparing for the event.

“[Boston Police] figured out how to maneuver both sides,” Kayyem said. “They allowed people to express themselves in a safe way. They insured there would be no violence.”

David Velona said he drove up from New York to “fight fascism.” He recently traveled to Normandy and said, “As an 18-year-old man, I looked at the bunkers where soldiers were ripped up. It’s overwhelming as a Jewish-American that Nazis have been emboldened by the White House.”

Brouk Belay’s message was pretty simple. He wore a shirt that read “I’m black and Jewish” and stood smiling as people passed by him chanting “Black Lives Matter” and “No hate.” He said he wasn’t surprised by the vast number of counter-protesters that showed up.

“I love it. It’s beautiful,” he said. In response to some of the arguments and violence seen at the rally and in Charlottesville, Belay said he’d “rather not give them the satisfaction but I have no sympathy for them.”

Who’s them? “Anyone who doesn’t like my shirt,” he said with a smirk.

Brouk was a breath of fresh air after some swirling chaos. His message was simple and he wore it with a smile. #Boston ✌️@groundtruth

A 26-year-old man whose face was covered with a black bandana declined to give his real name. He was marching with other members of Black Lives Matter of Boston and said he hoped this event sets an example for all cities that will counter-protest hateful rallies.

“We’re the most diverse city in America,” he said. “We will push Nazis and white supremacists out.”

Following the Boston event, a group called ACT for America cancelled “America First” rallies that had been scheduled in 36 states on Sept. 9.

However, the Bay Area is bracing for “alt right” events this weekend, the next test for cities across the country contending with how to police and respond to right-wing and white supremacist gatherings.

Kayyem, the security analyst, says it’s impossible for cities to over prepare for potentially violent rallies. Kayyem says cities should use a variety of methods to ensure safety — from having a heavy police presence and using social media to learn more about specific groups and their goals.

“Go to these public websites,” Kayyem says of police strategies. “Who are [the demonstrators]? What are they saying? Are they trying to congregate?”

She said that as a result of Charlottesville and the increasing frequency of these kinds of demonstrations, cities will need to continue to make safety paramount — even if that means restricting press access and separating protesting groups.

No one can be heard or express themselves if they’re in imminent danger, Kayyem says.

GroundTruth’s Eric Bosco asked counter-protesters at the Boston Free Speech Rally about the power of listening.