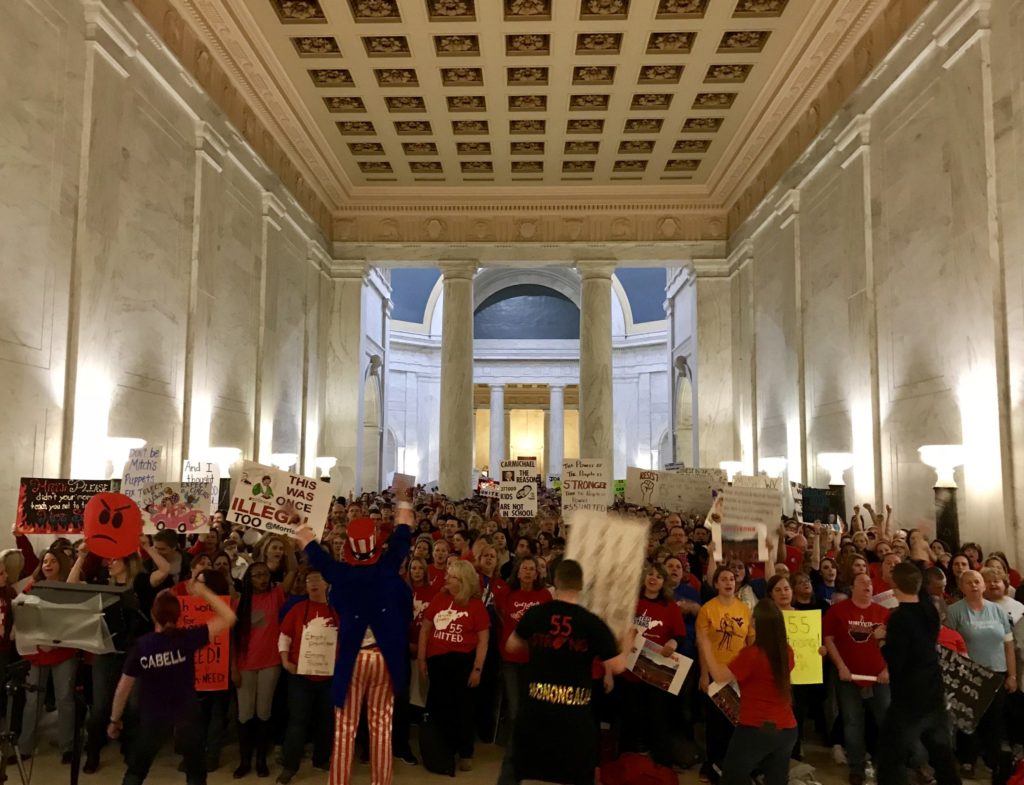 While covering the teachers' strike in West Virginia, Molly Born ran into people she grew up with. "People I hadn’t seen or thought of in years were suddenly those whose stories I was covering," she writes. (Molly Born/WVPB/GroundTruth)

CHARLESTON, West Virginia — The sea of striking teachers gathered in the Capitol here was dotted with red bandanas.

Teachers and their supporters knotted the bright kerchiefs around their necks, wore them as headbands or tied them on their wrists. This collective nod to labor history brought back pointed memories of the century-old unrest of the West Virginia mine wars when striking coal miners fought for better working conditions and considered the bandanas an essential part of their uniform.

After decades in which the labor movement dwindled, the strike signaled a potential resurgence of the union-based spirit that helped define this region.

The work stoppage that closed schools in all 55 counties for nine days began with educators in the state’s southern coalfields, where the mine wars played out – and where I have come to work as a Report for America corps member posted with West Virginia Public Broadcasting.

That teachers here called for walkouts first surprised very few with roots in this area. I’m a native daughter of West Virginia with family who worked underground in the mines, but until recently, I knew little of the labor saga that had unfolded in the hills all around me and how it shaped the history of this place.

Andrew Thomas, a social studies teacher at Mullens Middle School in Wyoming County who was among those protesting at the Capitol, told me he didn’t miss the chance to bring history to the foreground. He taught his fifth-graders an entire lesson on the Battle of Blair Mountain, one of the largest labor uprisings in American history.

“Obviously the teacher strike can’t be comparable to that of the mine wars,” he said. “Many lives were lost during the early days of the mine wars. However, the hard work and dedication of both strikes were very similar.”

Teachers and school service personnel across West Virginia walked off the job in late February into early March, demanding better pay and a fix to their health insurance program. The action has inspired teachers in Kentucky, Oklahoma, Colorado and Arizona. Less than two months after setting up my base for West Virginia Public Broadcasting in Williamson, I first thought that I was putting my coverage of the southern coalfields on hold for a spell when I headed to the state capital to report on some of the most critical developments of this action.

At the Capitol, I weaved my way through the crowds of teachers and their supporters packing the hallway between the Senate and House of Delegates chambers. Educators in West Virginia are some of the lowest paid in the country, and among those chanting, holding 55 Strong signs or watching from the galleries were old high school classmates, family friends, my next-door neighbor from childhood. People I hadn’t seen or thought of in years were suddenly those whose stories I was covering.

I started my reporting on the seventh day of the strike. Union leaders said teachers wouldn’t go back without the five percent raise that Gov. Jim Justice had approved days earlier and the House had then passed. That proved to be the case when the Senate agreed on a four percent raise the next day. The chambers were at an impasse, prompting the creation of a special committee of lawmakers to come to an agreement. Then on Monday, the eighth day of the strike, teachers returned in record numbers, forming lines that stretched around the Capitol complex.

More than 5,000 visitors came through before authorities made the decision to close the entrances. I could hear the crowd roar several floors down. During one of my many trips darting between the basement pressroom and the legislative chambers, I finally stopped and looked out at the sea of people in front of me, marveling at their energy. We were bearing witness to something remarkable, no matter which side you were on.

On Tuesday, March 6, the Senate agreed to the raise the teachers were asking for, and after a “cooling off day,” classes resumed Thursday. Gov. Justice also ordered the creation of a task force to study long-term solutions to teachers’ health care program. Curious if and how educators would use this experience as a teachable moment, I visited Mullens Middle, where I met Andrew Thomas and his fifth-grade social studies class.

In an emotional lesson, Thomas, a self-identified fierce conservative who voted for Donald Trump, confessed to his students that he felt betrayed by the Republicans in the state Senate who held out on the teachers’ demands. He eagerly showed them a campaign video for state Sen. Richard Ojeda, a charismatic Democrat running for Congress who held court among teachers in the statehouse during the strike.

On a dry-erase board, near a laminated newspaper front-page about Donald Trump’s inauguration and a union poster, he’d written an equation in black marker: $32,000 X 5 percent = $1,600. It was his salary and the extra he’ll get now. Still, he told them, it’s far from enough to make up for living in one of poorest parts of the country.

One of the reasons I moved back to West Virginia was to tell nuanced stories of people the world seldom hears from and to learn more about a place that has shaped me – a place I had fiercely defended over the years, but one I had also disavowed, sometimes in the same breath. I’m not the first West Virginian to leave Pittsburgh in search of a greater understanding of what it means to be from this place (and a good yarn).

Chuck Kinder, a now-retired University of Pittsburgh professor, packed up his life in 1994 and moved home to live among his native mountain people. To colleagues mystified by his decision he quoted Flannery O’Connor. I think of these words often: “To know oneself is to know one’s region.”