The Zabuli School: The Future 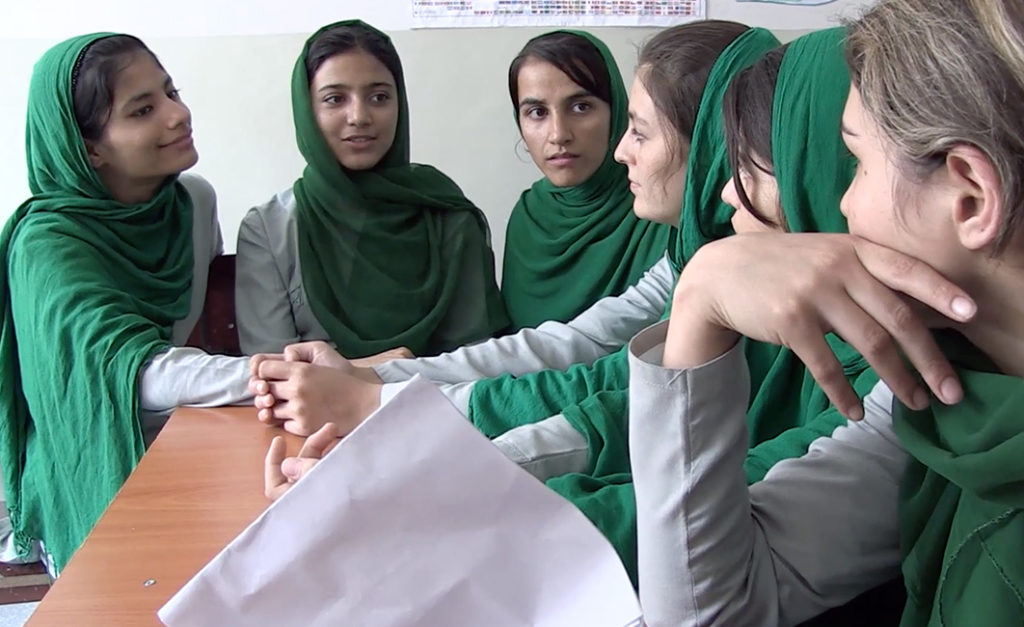 The Zabuli Education Center graduating class of 2015 reminiscing about their time together here and talking about what's next. From left: Shakira, Mursal, Bresna, Rafiya, Aziza, Yalda, Negina. (Photo by Beth Murphy/GroundTruth)

DEH’SUBZ, Afghanistan — The seven girls graduating from the school here on the outskirts of Kabul this fall have seen each other through Afghan culture’s unique coming-of-age rites, and they have pulled together during the hardest of times.

When one lost her mother, when one was forcibly engaged, when another was compelled by her brother to stay home from school for months, they’ve shared their secrets, fears, and most of all, the liberating freedom of expression the school allows them. The girls say that theirs is a sisterhood, a special kind of family.

Among the seven graduating the Zabuli School is a calm and composed scholar, a thoughtful poet, a born storyteller, a prodigy with a quick temper, a quietly clever mathematician, a quick and witty cut-up, and an 18-year-old newlywed with an unparalleled work ethic. Breshna, Aziza, Shakira, Yalda, Mursal, Rafiya and Negina represent the best and brightest of a new generation of young Afghans.

But even in the best of times, the rare family that could afford tuition might not have allowed one of its daughters to go off to Kabul or further afield for college. And this is not the best of times in Afghanistan. It is a time of insecurity, unrest and violence; a time when the Taliban and other extremist groups are making a grab for power and validation in the vacuum left by the drawdown of US and NATO troops.

The specter of extremism looms throughout the country, though incidents in rural areas often go unacknowledged in the international media. In August, a Deh’Subz policeman was murdered by the Taliban — a crime that hit close to home and weighs heavily on those connected with the Zabuli School. In Deh’Subz and throughout Afghanistan these days, the fears of average citizens are palpable. The streets are eerily quiet. Markets are frequented by fewer shoppers. People are staying home and laying low.

“I don’t see how anyone could feel safe,” says Aziza, one of the seven graduating seniors, “with fighting and explosions every day.”

Until this spring, November graduation was destined to be the end of these girls’ educations.

But despite security fears, financial limitations and patriarchal tradition that could otherwise have easily prevented the seven from going off to college, they will all be continuing their educations. College is coming to them, thanks to an international fundraising campaign on the crowdfunding site Indiegogo that raised nearly $120,000 to build a community college in Deh’Subz.

On Sunday, August 16, the graduating girls stood before the Zabuli School’s founder Razia Jan, their teachers, their families and the region’s elders to lead the groundbreaking ceremony for the college in their village. It will be the first free women’s college in any small village in Afghanistan.

None of the students had ever spoken in public before — certainly not before a mixed-gender crowd that included their fathers, grandfathers and the most important men in the community. These are girls who have been raised to stay silent in the presence of men, who have been pressured to cover their faces in public with the burqa, who have been conditioned to lower their gaze in submission rather than look any man in the eye.

And yet nothing in their presentation belied their nerves or lack of experience. Each student took her turn, poised and steady as she spoke. One by one, they led the crowd through greetings, prayers, recitations, a dedication and the laying of the first stones of the Razia Jan Community College.

Razia herself sat front and center, deeply proud of her students and pleased that the men of the village finally had an opportunity to see how far the girls have come from the children who first enrolled in the school — many of whom had been unable to even write their own names. The idea of an event like this being hosted and run by a group of female students would have been inconceivable seven years ago when the Zabuli School first opened, but much has changed in the village since then.

Seven years ago, the town looked like a place that time forgot — scarred by war and poverty, seared by drought, with few passable roads and few shops open for business. Behind stone fences, rocky yards and crumbling walls, most of the region’s daughters were hidden from view.

Some had lost their fathers to war, poverty, disease, addiction, or abandonment, and they (and their widowed mothers) were at the mercy of whatever resources and kindness their uncles, brothers or other relatives would spare. Most were destined to labor at household chores until they were old enough to bring a bride price, and then to be traded away in marriage to a husband and his family. They were likely to join the 87 percent of women over 15 who are illiterate in their country. Many had never seen the inside of a school.

Back then, the Zabuli School broke ground. At that event, a few men gathered, skeptical about the very idea of a school for girls. None would look Razia in the eye. They were appalled at both her presence and her actions, and they made demands that she build a boys’ school instead. Despite their opposition, Razia stayed her course. The new school was free, and 100 girls were enrolled that first year, many by parents who were tentative and guarded.

Today, the streets of Deh’Subz feature a steady parade, mornings and afternoons, of nearly 500 girls making their way to and from the Zabuli School.

“In the beginning, no one wanted to let their daughters go to school,” Shakira explains. “But now everyone wants their daughters and sisters to go school and learn . . . They are not only letting us come to school, but convincing us to learn more.”

The residents of this village have not only embraced the school, they have become its protectors. Village elders meet with administrators each month for state-of-the-school briefing — meetings at which they are always asked if they have any concerns and worries for the school before they are asked, again, to pledge to protect it.

Because the Afghan government has neither the personnel nor the funding to provide protection for the school, the community’s role is critical. A new and remarkably comprehensive report from The Global Coalition to Protect Education from Attack points out that in threatened educational institutions around the world, community engagement and even community guards like the Zabuli School has may be the key to keeping students safe.

At the groundbreaking for the college, the men of the village were active participants, and they shared a sworn commitment to ensure the safety of this new education facility, just as they have protected the Zabuli School.

Commander Saffuddin Nayungali, head of security for the district, made no bones about where his loyalties lie.

“Until we die, we will stand together with you and make this college,” he vowed to Razia as the ceremony got underway. “We will make sure nothing happens to you, the girls or the school.”

Many of the attendees beamed with pride at the students’ speaking ability. Some marveled at Aziza’s nearly perfect reading of a speech — in English. The elders took turns laying stones for the new foundation, and each offered a personal wish for the school: that it be successful, that it be safe. The region’s head of security placed his stone, saying, “I am putting this stone on the foundation, and I hope one day this college provides doctors and professors for our village.”

Overwhelmingly, the graduating seniors and eligible students from nearby areas share that same hope. At its opening, the college will offer four majors: Computer Science, Nursing/Midwifery, Dari and English.

Razia has been overwhelmed with applicants for the nursing and midwifery program and all seven of this year’s Zabuli graduates are registered.

The day after the groundbreaking, three teenaged girls turned up requesting to register for the nursing program. They had walked eight miles from their own village, where they are high school juniors. The girls were certain that if they waited until their senior year to enroll, the program would already be full.

The demand for the nursing program speaks volumes about the need for local medical care—especially for women — in the region. Most students know families who have lost mothers in childbirth or children who needed medicine or unavailable medical treatment.

Aziza recalls the lack of medical care as one of the worst hardships of her childhood.

“It was our biggest problem — that when we got sick there was no hospital to go to,” she explains. “When we got sick, we had to go to the city, but we don’t have transportation.”

It is Razia’s intention to provide a long-term solution to this problem by training medical professionals, but also to offer some immediate relief by including a working health clinic in the plans for the college.

At the groundbreaking ceremony, some of the villagers refer to Razia as Mother Razia. In part, she has won them over with her maternal devotion to her students. Last year, after she had open-heart surgery, Razia contacted the school’s vice principal from the ICU via Skype to make sure the students were well. She worries about them constantly, but her fears make her no less resolute in her commitment to their education.

There were many people in Razia’s life who did not want her to come back to Kabul this summer for the groundbreaking, and many who asked her not to found a college that would focus more attention on education for girls. But whatever her fears may be, they are outweighed by her convictions. She reminds the girls that studying is not a sin; that they have the right to be happy. Faced with the danger of this moment in time in Afghanistan, says says simply, “The danger is there, but we cannot stop . . . If we are scared of death, we cannot live.”

Despite in the current climate of fear and worry, Razia’s students are not wavering either. They continue to dare to hope for the better life tomorrow might bring to their families, their village, and their country.

Aziza, who is the first person in her family ever to graduate from high school, can’t wait for the next phase of her education to begin.

“There was a time when graduating from high school was like a dream,” she says. “None of us imagined that there would be a college for us.”