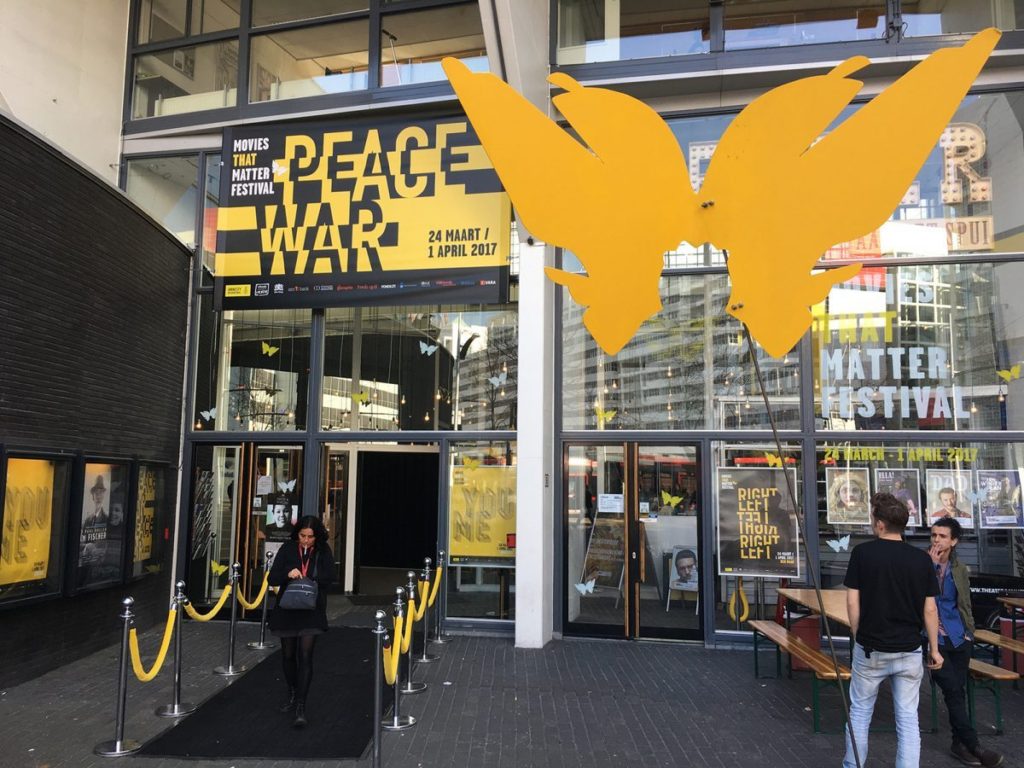 Golden butterflies are a symbol of Movies that Matter, the Amnesty International film festival in The Hague, Netherlands. (Photo by Beth Murphy/GroundTruth)

THE HAGUE, Netherlands — Golden butterflies are fluttering across this town. They’re the symbol of Movies that Matter, the Amnesty International film festival celebrating nine human rights defenders and screening films that share their powerful stories. The symbolic meaning of butterflies — transformation, freedom from struggle, hope — is embodied by all the activists gathered here at The Hague this week, the majority of whom are women.

“If it weren’t for women,” said Anna Neistat, Amnesty International’s global research director, “we would have a different scene for the human rights movement worldwide. When I think about places where men dominate any other sphere of life, when you look at human rights and civil rights organizations – it’s women working in that space.”

That space, according to Neistat, is shrinking.  Around the world, she says, the work of social justice activists who defend human rights are under attack: “We are increasingly concerned that not only are people’s rights being violated, but that those who stand up for people on a national or regional level are under threat,” she said.

There is evidence of this shrinking space in every country that the Movies that Matter human rights defenders are working.  It’s especially evident in Russia, which according to Human Rights Watch’s World Report 2017, stepped up its persecution of independent critics in 2016.

Human rights lawyer Nadezhda Kutepova, featured in the film City 40 by Samira Goetschel, is one of them. Kutepova was accused of espionage and plotting against Russia’s nuclear industry for exposing a secret city in Russia that houses the country’s largest stockpile of nuclear weapons and is one of the most contaminated places on earth. The Ozyorsk area was poisoned after a nuclear storage facility exploded in 1957.

“My father and grandparents died of cancer — victims of the radioactive contamination,” Kutepova shared in a screening Q&A, “and I wanted to defend people that no one else cared about or wanted to listen to.”

She fought for people impacted by the disaster to get medical treatments and benefits.  After a state-backed television station accused her of treason last April, Kutepova fled the country with her four children and was granted asylum in France.

Leyla Imret is also escaping persecution. She’s living in hiding and was the only human rights defender unable to attend the film festival.  Even Asli Ozarslan, the director of Dil Leyla, doesn’t know where she is. Imret, a Kurd, became the youngest mayor in Turkey in 2014. She was 27 and had recently returned to her native village Cizre.  According to Amnesty International, human rights abuses committed by government security forces are increasing with impunity in Turkey especially in the predominantly Kurdish southeast along the Syrian border where Cizre is located.

Imret’s father, a Kurdish fighter, was killed there when she was a child.  Twenty years later she risks her father’s fate as she is forced into hiding after the Turkish government accuses her of “terror propaganda.”

As risks to human rights defenders increase worldwide, Neistat said she’s especially worried about shrinking rights in western countries. “Six months ago,” she said about President Trump’s travel ban and rising  hatred and intolerance in America, “what’s happening in the U.S. would seem like [a] complete fantasy.”

In the European Union, a raft of new counter-terrorism measures has been criticized by Amnesty International as “draconian.” The human rights group says security measures that have been adopted in 14 countries over the past 2 years discriminate against Muslims and refugees.  These measures alienate and spread fear among people like anti-terrorism activist Saliha Ben Ali whose story is told in the documentary The Empty Room.

Ben Ali was devastated when her 19-year-old son disappeared from their home in Belgium to join 6,500 Europeans waging jihad in Syria. Within the year, he was killed. “When can I start grieving?” she asked. “Never,” is her heartbreaking answer. What she does instead is to spearhead a national campaign to keep Islamic State recruiters from luring other young men—Muslim and non-Muslim—into radicalization.

Holding a small statue topped with a flying golden butterfly, Ben Ali accepted the festival’s highest honor, the Matter of Act Human Rights Award. In her remarks, she thanked director Jasna Krajinovic for giving her family a chance to “speak out and explain our suffering.”

“We are suffering each day,” she said, “but we can’t show our suffering because we are considered — even today — just like parents of a terrorist.”

Shifa al-Qudsi knows it’s possible to be saved from a life of radicalization and shares with Ben Ali a strong sense of motherhood that inspires her work.  Featured in the film Disturbing the Peace by Stephen Apkon and Andrew Young, al-Qudsi, a Palestinian, explains to her daughter that she is going to blow herself up in an attempt to kill as many Israelis as possible.

Arrested before she can carry out the suicide bombing, al-Qudsi was sent to jail where she met another mother, an Israeli guard whose son was recently killed in a suicide attack. The simple kindness the guard showed her became the catalyst for her to find common ground with those she once believed were “the enemy.”

In June 2016, 22 human rights organizations including Physicians for Human Rights, Amnesty International and The Coalition of Women for Peace accused the Israeli government of inflicting systematic harm on the work of social justice activists who defend human rights. They implored President Reuven Rivlin “to stop the anti-democratic wave engulfing us.”

Movies that Matter Artistic Director Dirk van der Straaten said the emphasis on films made by and about women is unplanned, but likely springs from deep-seated personal values.

“I’m a feminist,” he said. “We don’t have a quota [for women-focused films], but my view is that while women are half the world population, they’re treated like minorities in so many places.” Those stories, he believes, need to be told and seen.

Razia Jan, the protagonist in my film What Tomorrow Brings, said brutal attacks against women and girls create a state of terror in the hearts and minds of Afghanistan’s female population.  She believes this fear leaves girls scarred emotionally. “They are treated like they don’t matter, so they believe they don’t matter,” Jan told an audience at a special screening for teachers.

At the girls’ school she founded in 2008, Jan is teaching a counter-narrative. “My goal is for the students to realize that they are special. Every single girl is special, unique, precious. She has so much to offer this world.”

Amnesty International says human rights defenders like Jan face a range of violence daily in Afghanistan where gender equality is far from being realized. Women are subordinate legally, socially and politically.

Despite the environment in which she works, Jan has a lot to celebrate this week. Her Zabuli Education Center — a K-12 girls’ school — welcomed students to the first day of classes for the tenth year in a row.  Next door, Jan’s new midwife college opened its doors for the first time.

The work Jan and other activists are doing covers a broad geographic range.  “It’s evidence,” said Manon Olsthoorn, human rights coordinator for the Dutch Ministry of Foreign Affairs, “that the whole world is on fire.”

The human rights defenders celebrated at the Movies that Matter Festival are among those carrying the water buckets, and like the butterfly in this Emily Dickinson poem, they are healing — everywhere:

From Cocoon forth a Butterfly

As Lady from her Door