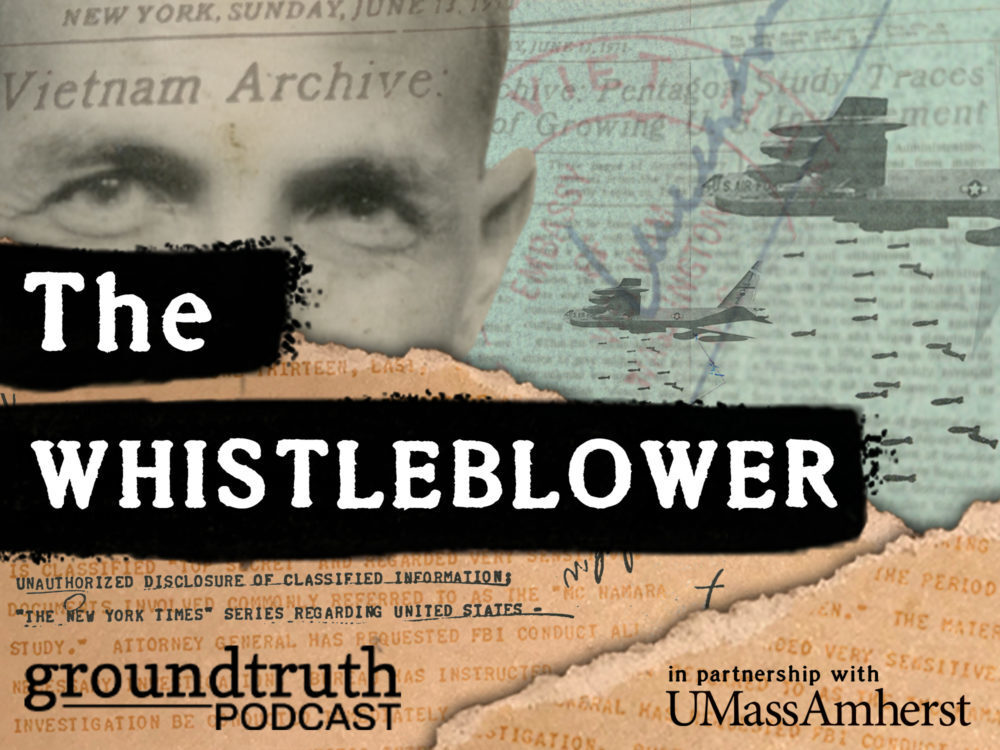 Boston, April 8, 2022 – The GroundTruth Project announced today that its latest podcast season, The Whistleblower: Truth, Dissent and the Legacy of Daniel Ellsberg, has been nominated for Best Documentary Podcast in the 26th Annual Webby Awards. Hailed as the “Internet’s highest honor” by The New York Times, The Webby Awards, presented by the International Academy of Digital Arts and Sciences (IADAS), is the leading international awards organization honoring excellence on the Internet.

The five-part podcast series, The Whistleblower, explores what forces led Ellsberg to risk 115 years in jail in service to the truth. At the height of the Vietnam War, Ellsberg leaked 7,000 pages of classified documents to American newspapers. The Pentagon Papers revealed that Americans had been lied to for decades about the war. In exclusive interviews with Ellsberg, he reveals his evolution from Cold Warrior to whistleblower, the legacy of truth and dissent in the U.S., and their implications for our democracy today.

“Nominees like GroundTruth are setting the standard for innovation and creativity on the Internet,” said Claire Graves, President of The Webby Awards. “It is an incredible achievement to be selected among the best from the 13,500 entries we received this year.”

“At a time when truth-tellers around the world are being threatened, it’s an honor for our podcast season to be recognized among the best of the internet,” said Charles M. Sennott, founder and Editor-in-Chief of GroundTruth and host of the podcast. “Ellsberg’s lessons for us today ring true as ever: we all have an active role to play in standing up for democracy.”

The Whistleblower podcast series was part of a yearlong public history project in partnership with UMass Amherst exploring “Truth, Dissent and the Legacy of Daniel Ellsberg,” including conversations with historians, activists, former policymakers and whistleblowers such as Edward Snowden and Ellsberg himself. Explore The Ellsberg Archive Project here.

As a nominee, GroundTruth is also eligible to win a Webby People’s Voice Award, which is voted online by fans across the globe. From now until April 21st, The Whistleblower fans can cast their votes at vote.webbyawards.com.

Winners will be announced on Tuesday, April 26, 2022, and honored in a star-studded show at Cipriani Wall Street. Winners will have an opportunity to deliver one of The Webby Awards’ famous 5-Word Speeches. Past 5-Word Speeches include: Steve Wilhite’s “It’s Pronounced “Jif” not ‘Gif’; NASA’s “Houston We Have A Webby”; and Solange’s “I Got Five On It.”

About The Webby Awards

Hailed as the “Internet’s highest honor” by The New York Times, The Webby Awards is the leading international awards organization honoring excellence on the Internet, including Websites and Mobile Sites; Video; Advertising, Media and PR; Apps & Software, Social; Podcasts; Games and Virtual & Remote. Established in 1996, The Webby Awards received more than 14,300 entries from all 50 states and 70 countries worldwide this year. The Webby Awards are presented by the International Academy of Digital Arts and Sciences (IADAS). Sponsors and Partners of The Webby Awards include Verizon, WP Engine, Canva, Omidyar Network, YouGov, NAACP, KPMG, Fast Company, Wall Street Journal, MediaPost, Podcast Movement, TheFutureParty and AIGA.