ON THE GROUND IN NEWARK, NJ

The voices of Newark on the road back to local control 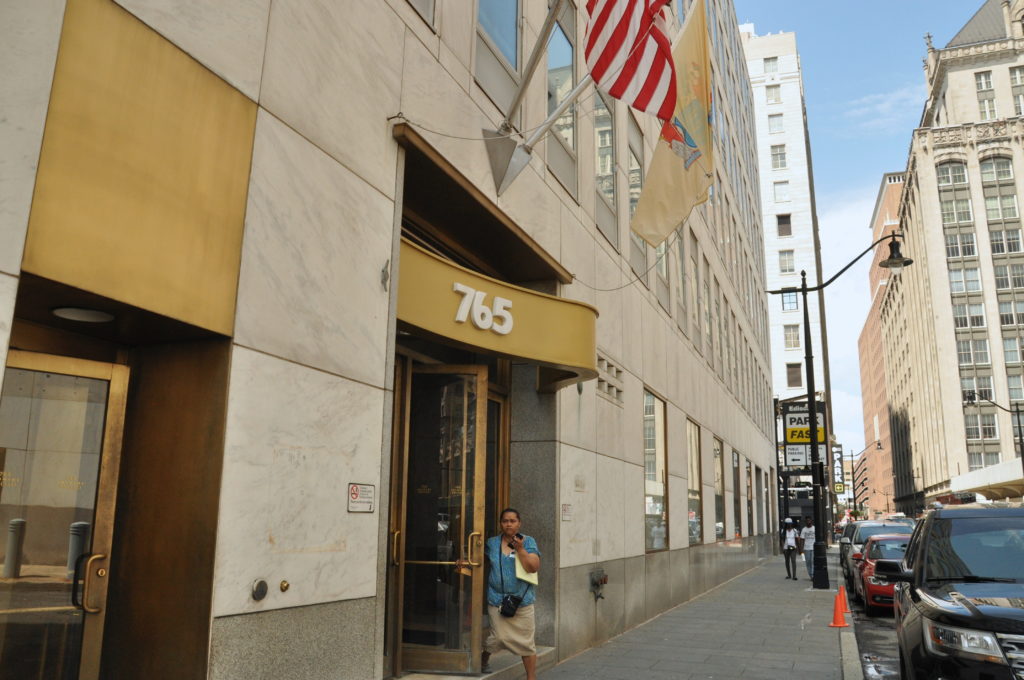 Downtown Newark, where the school district's offices is nestled on a side street, practically buzzes with energy. (Photo by Devna Bose/GroundTruth)

Newark, NJ — A microphone was being set up at the podium, emblazoned with the Newark Public Schools logo, as I walked into the basement conference room of the district’s gilded central office building.

“Well, this is gonna be good,” grumbled an audience member as she looked skeptically at the school officials before her.

As a reporter covering K-12 education for Chalkbeat in Newark, New Jersey, I smiled tentatively at a few of the board members I’ve reached out to for comment, hoping it might coax them to respond to my email. Then, I placed my old camera on the table, found a power outlet, took a seat and waited for another board meeting to start.

For a basement, the room was jarringly bright and I couldn’t tell if it was the fluorescent lights overhead or the tension in the room causing a faint buzz. People packed in, greeting those they recognized with familiar gestures, though not to me. I’m still an outsider here.

I moved from my home state of Mississippi — the land of pillowy magnolias and towering pine trees; red-dirt-under-fingernails and honey-sweet drawls — just eight months ago to cover New Jersey’s largest city with Report for America. It seems impossible to describe Newark in all its density, and it feels impossible not to root for it.

Newark is intensely colorful, from its murals to its cuisines to its personalities. The city is complex, full of contradictions and curiosities, and it’s rich with history. Newark is undergoing something of a renaissance now, but many Newarkers still remember when they had to pick up the broken pieces of their city, both figuratively and literally.

Decades ago, Newark was rocked by riots (or rebellion, as many residents describe it) that left 26 people dead. Citizens protested police brutality, and when national troops and state law enforcement arrived, the unrest escalated and ravaged the city. Those four days in the summer of 1967 caused major damage to the city and its image, and some believe it started a decline that continues to affect Newark, causing issues like white flight and disinvestment, and subsequent housing shortages and high unemployment rates that the city is still recovering from.

While Newark continues to try to overcome these issues, rooted in a past that reverberates today, I suspect that’s exactly what Newarkers love about it: its grit and defiance in the face of its sybaritic neighbor, New York City. Newarkers show up and show out for their city, no matter the occasion, and the school board meeting is just another example of how residents show their commitment and pride, how seriously they take their role in their community, their responsibility to speak and be heard.

Newark Public Schools have had a saga of struggles too, a narrative the national media and ladder-climbing politicians have bled bone-dry, leaving Newarkers, some would argue, rightfully distrustful. More than 20 years ago, the district was taken over by New Jersey due to board corruption and general mismanagement. Local residents adamantly opposed state control, argued it was anti-democratic and that it robbed Newark residents of the opportunity to have meaningful input in school policy. In a city that’s majority black and Hispanic, the takeover has an inherent racial element: predominantly black school districts are more likely to be taken over. It was only a couple of years ago that local control was regained.

The second-most racially diverse city in the state, Newark is represented by a board of education reflective of that diversity: the nine members are all either black or Hispanic.

I watched as those nine board members – the community’s first elected board in more than 20 years and a symbol for the community’s renewed say in their children’s schools – shuffle through their agendas and prepare for the night’s meeting. And Roger León, the superintendent who I couldn’t seem to make eye contact with that night, is the board’s choice to lead the way.

As the meeting began, I sat in the back corner and went over the board agenda, a packet so thick it looked like a phone book. After the superintendent read his report, board members debated and asked pointed questions about culturally responsive curriculums, test scores and new district initiatives with so much passion their voices sometimes cracked. Hours later, the meeting draws to its highly anticipated end: public participation.

Despite its previously unelected school board, public participation isn’t new here in Newark. Since the reign of former superintendents Cami Anderson and Christopher Cerf, in the days of state control, Newarkers have held sit-ins and protests, and I’m told that at board meetings in the past there wasn’t room to breathe. There might be more empty seats in the room nowadays, but people still show up and shuffle to the podium to demand answers from their elected officials about issues that have long-plagued Newark schools — like teacher shortages, crumbling buildings and student health concerns.

Not everyone is a critic; many community members are thrilled with the board, their appointment of León as superintendent, as well as his agenda and pride in his hometown. The tone of criticism at meetings have changed and there’s a baseline of trust when Newarkers feel like they’re talking to other Newarkers who have equal stake in their schools.

But as I watched teachers, parents and advocates rotate places at the podium, I can’t help but consider the irony of it all: some people feeling like the community’s first elected school administration in more than two decades is ignoring the voices that got them there. This is when I see the real Newark, in all its complexity.

One by one, names were called and Newarkers stood before the board, imploring the members to listen, just for three minutes, “Please?”

Some overstayed their welcome at the microphone, their voices filling the subterranean room, pleas ricocheting off the too-white walls. Their determination was applauded by the audience, cheers echoing the speakers’ requests.

“I’ve been in school for months, and there’s still not enough chairs in my classrooms,” one student said at a recent meeting. “When will we have seats for all students?”

“We need to be more concerned about what our young people are going through,” a parent chimed in. “Their mental health is important.”

“Some teachers don’t know how to serve their students,” an educator said. “There needs to be more training for them.”

That’s not to say the Newark Public Schools administration isn’t trying — they’re all staunch supporters of their city and have said they want to do right by the place they call home — but the road back to local control has been harder to navigate than Broad Street at 5 p.m. and one of the district’s major roadblocks has been public input. Newarkers have been historically silenced, and this is the first time in decades they’ve been able to elect fully empowered board members and hold them accountable.

“We really won’t feel as ignored if you give us a response,” someone said at a meeting in August.

For now, and until that microphone is cut off, I know that Newarkers will keep showing up and asking the questions that matter. With each question they pose, I feel a little more at home.

Devna Bose covers K-12 education for Chalkbeat Newark. This dispatch is part of a series called “On the Ground” with Report for America, an initiative of The GroundTruth Project. Follow her on Twitter: @devnabose.