The US officially withdrew from the Paris Agreement. We’ve been following the story since the accord’s inception. 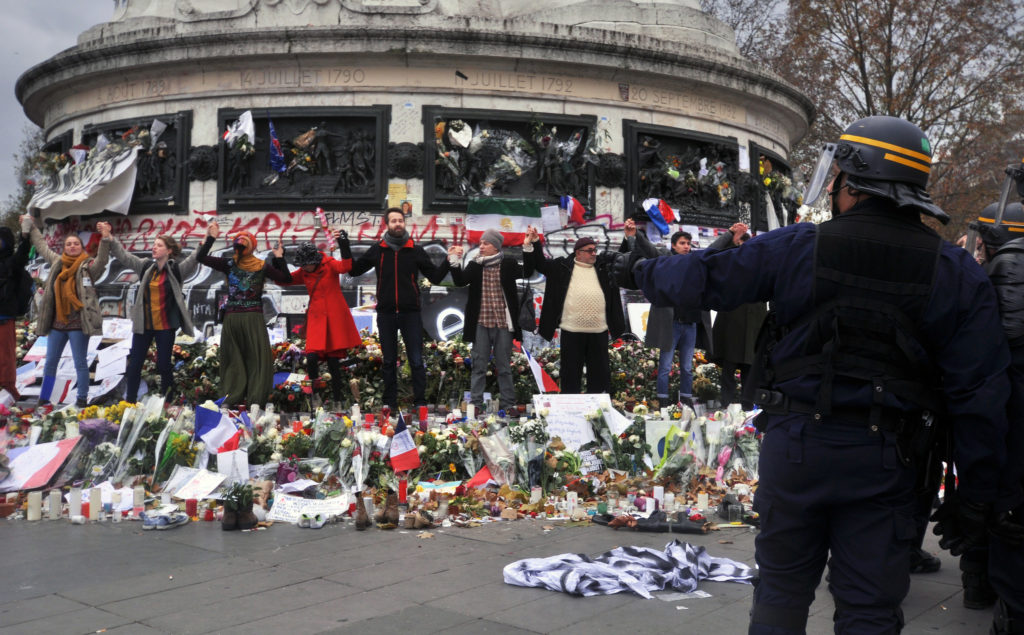 Demonstrations took place in and around Place de la République in Paris on the day before the COP21 climate talks opened in 2015. (Photo by Chris Bentley/GroundTruth)

Editor’s Note: This story was updated on November 9, 2020 to reflect the outcome of the presidential election and policy announcements by the Biden-Harris transition team.

Melody Schreiber, a D.C.-based freelancer, Arctic Today reporter and former GroundTruth reporting fellow, was one of five reporters who traveled to Paris nearly five years ago to cover the 2015 United Nations Climate Change Conference, or COP 21, where the Paris Agreement was finalized.

On Wednesday, she tweeted, “Sometimes change is incremental and iterative. Sometimes we can feel exactly how momentous a change is. Sometimes we move back before we move forward,” following photos from the trip. That same day as her tweet, the United States became the first and only nation to officially leave the Paris Agreement. As part of our climate reporting in the last five years, GroundTruth has been covering the climate accord since its inception, as well as its immediate aftermath, like youth protests in Le Bourget and student leaders in Sèvres all fighting for better policy to combat climate change. We have traveled to Svalbard, Norway to report on how to decarbonize our energy system, and we’ve looked at the role of online activism amid the pandemic in Woods Hole, Massachusetts.

Across six continents, we have also explored the impacts of a warming planet and the policy that is, or isn’t, in place to combat the rising temperatures, or even deal with its irreversible effects.

The agreement is non-binding, but its aim is to make the response to climate change a global one, increasing countries’ abilities to deal with its impacts while working to keep the planet’s temperature rise below 1.5 degrees Celsius above pre-industrial levels. Scientists are saying this ambition is a best-case-scenario that is slipping further out of reach. And if the planet warms by 2 degrees Celsius or more, seas could rise an average of nearly two feet, 30 million coastal communities will be flooded yearly by 2055, 37% of the population would face a severe heatwave at least every half-decade and the global per-capita GDP could fall 13% by 2100, according to an analysis of 70 peer-reviewed studies by Carbon Brief.

In response to the official quitting of the accord, #WeAreStillIn is spreading on Twitter, with its users including political leaders like Virginia Rep. Robert Cortez Scott and former Governor of California Jerry Brown, educational institutions like American University and Bard College, and businesses like Patagonia and Stonyfield Organic. A study from the Pew Research Center from June reports that 65% of Americans think the federal government is doing too little to reduce the effects of climate change. And the British Broadcasting Corporation reports that old wounds for climate diplomats have been reopened, meanwhile many Americans are facing disappointment, although not all, given that Trump made leaving the accord a key part of his 2016 election platform.

Before Trump was elected, he called the agreement a “bad deal” that would burden American households with “enormous costs.” If elected, he pledged to cancel the agreement, and on June 1, 2017, he announced the nation’s withdrawal from the treaty, which he said would only “further [the] decimation of vital American industries on which countless communities rely.” He formally notified the United Nations last year of the nation’s withdrawal, and the mandatory year long waiting period ended on Nov. 4.

President-elect Joe Biden, however, has plans to rejoin the Paris Agreement on day one of his administration as part of his climate plan, while “use[ing] every tool of American foreign policy to push the rest of the world to raise their ambitions alongside the United States.” His plan to tackle climate change is the most aggressive of any major party nominee, reported National Public Radio.

But even with Biden’s victory, his climate agenda could be met by a Senate likely to remain in Republican control, pending two runoff Senate races in Georgia in January. But, even if without control of the Senate and a conservative Supreme Court, he will have the power to declare a climate emergency, make dozens of executive actions that go beyond re-joining the Paris Agreement or reversing Trump’s regulatory rollbacks and put a focus on climate justice, according to Eric Holthaus for The Phoenix.

Nonetheless,  the final ballots cast in the 2020 presidential election decided, the future of climate policy for the United States, and its relationship with the treaty. GroundTruth, though, has been covering it since its origin when we sent six fellows and three editors to the capital of France to report on the progress toward the deal and the challenges that lay ahead.

The team reported on the history made, the first international effort to limit global warming, as delegates celebrated while recognizing the work ahead of them. The Marshallese delegation invited Selina Neirok Leem, who was 18 at the time, to speak before the UN and share the impact of climate change on her home nation, which would be devastated by a continuous rising sea level.

As part of the team’s work covering COP 22 in 2016, fellow Justine Calma reported from New York that to young people, long talks in conference rooms aren’t enough. At the time, the number of countries having ratified the terms of the Paris Agreement had exceeded 55, the number required to make the accord enforceable.

On the other side of the world seven months later, Calma contributed to our Living Proof series, exploring how in the Philippines, which sees an average of 20 typhoons a year, extreme weather is creating the perfect storm for human traffickers to exploit. Over the weekend, Typhoon Goni hit Catanduanes island with winds at 140mph, making it the Philippines’ most powerful storm since Typhoon Haiyan in 2013, which killed more than 6,000 people.

In our coverage of COP 23 in 2017, fellows Ellen Kanzinger and Kylee Sapp spoke with citizens and lawmakers gathered on the steps of the Massachusetts State House, advocating for a bill that would hold the commonwealth to the guidelines set forth by the Paris Agreement after Trump announced his plans to withdraw.

Three years after Leem spoke before the UN about the perils facing her home nation, GroundTruth and FRONTLINE co-produced the Emmy-winning interactive film “The Last Generation.” Written and produced by Michelle Mizner and Katie Worth, the story is told by 9-year-old Izerman Yamaguchi-Kotton, 14-year-old Julia Rijino and 12-year-old Wilmer Joel, about the possibility of their home, the Marshall Islands, becoming uninhabitable in their lifetimes.

In addition to our fellows’ climate reporting from across the globe, our initiative Report for America has placed 14 corps members across the country to report on the environment. They are covering topics like the impact of climate change, water resources and endangered species from their local communities in the year of record-breaking wildfires on the west coast, droughts across the Great Plains that could be as bad as the Dust Bowl of the 1930s and 25 named hurricanes in the Atlantic through Oct. 5.

Our focus on the on-the-ground impact of climate change and climate policy gives local journalists the opportunity to dig deeper into the issues central to their communities, as corps member Theresa Davis did from Albuquerque, New Mexico in exploring efforts to carve out natural space on the Rio Grande.

If America’s effort in the global approach to fight climate change is taking a step backward, as Schreiber points out, maybe the next step forward is to amplify the local effort across our counties.