ON THE GROUND IN TWIN FALLS, ID 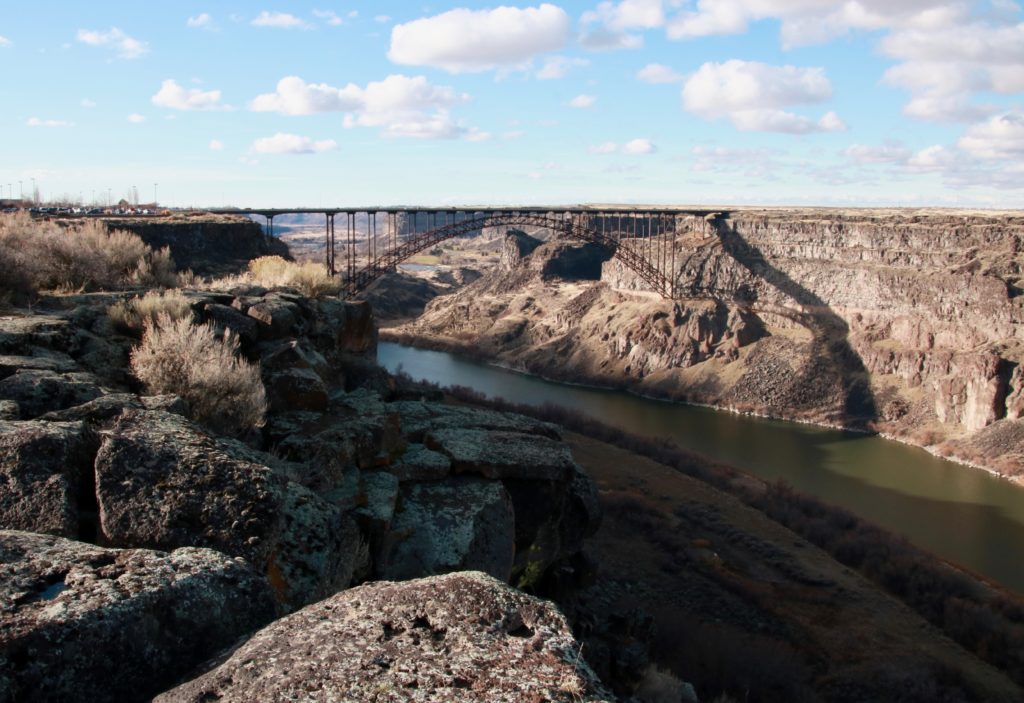 TWIN FALLS, ID – When I first drove into southern Idaho, I passed over a 500-foot canyon. Below was the Snake River, one of the longest in the Northwest, dotted with yellow slivers of kayakers enjoying the summer evening light. The dark blue water contrasted sharply with the steep, dry canyon walls that are the entryway to Twin Falls.

In my first week, I observed the cultural importance of the canyon and the river: from hikers and bikers rounding the rim trail, and climbers scaling the basalt cliffs, to BASE jumpers making daunting leaps before their parachutes sprung open in a sudden whoosh. The canyon, I learned, is the heart of the place.

Soon after, I was in the passenger seat of Tony Prater’s red SUV, again riding over the canyon, this time heading north. Prater owns a jewelry business and he’s a rabbi to the small, close-knit Jewish community in the region. He has lived in Twin Falls all his life, and was one of the first people I met upon arriving. Sometimes, he told me, he jumps on tour buses making their way through town, to Sun Valley or Salt Lake City, and personally highlights the area’s history. My own tour began on the Perrine Bridge, which stretches over the Snake for a quarter-mile. As we passed the dark bends and entered the high desert, Prater said something I haven’t been able to forget: “It’s all about the water.”

He told me the bridge is named after I.B. Perrine, the man who created the irrigation system nearly 100 years ago that made this desert into the “Magic Valley.” With the construction of a small dam and canals, he extended the river’s reach beyond its natural path. As a result, Perrine is often credited with founding Twin Falls, a city of approximately 50,000. Now, thanks to the “working river,” the surrounding plains are some of the most agriculturally productive in the state.

As we made our way down straight roads nestled between corn fields, Prater and I covered broad swaths of history. He recalled to me how by the 1950s, irrigation water flowing through the canals started to seep through porous volcanic rock and into the aquifer. Then, after recharging the underground storage, it sprung up, sometimes in new places. Like gold emerging from the earth, water was a sign that it was just the right location for a farm or house or business.

Today the largest trout farms in the country sit at the base of the canyon, taking in fresh spring water to grow fish; cows from large dairies feed among irrigated fields; food production facilities for companies like Chobani and Clif Bar reside within the bounds of the extensive local canal system. Each of these properties took its place, primarily, to get its lifeblood from the Snake.

Idaho is the fastest growing state in the nation, and the capital city of Boise sees the effects of this most acutely, as subdivisions consistently replace farm and ranch land nearby.

Twin Falls–the urban hub of Magic Valley–isn’t so far behind. Following the 2020 census, it will become a Metropolitan Planning Organization, a designation that comes with reaching a population of 50,000. It’s a threshold that requires additional city planning in order to support more people.

Agriculture still draws the bulk of water in southern Idaho for irrigation. But Twin Falls and other urban areas seeing in-migration are demanding more of it, and not just for consumption. Beyond canals and ditches, Perrine’s ingenuity facilitated recreation and tourism; the swarm of outdoor activity I noticed when I first arrived is something the city is increasingly trying to spotlight. With growth, it is becoming clear that the Snake is no longer exclusively a “working river.” How people relate to it, and who in the Magic Valley lays claim to it in the future–whether that’s growing cities or farmers on the outskirts–is yet to be seen.

Rachel Cohen covers south central Idaho for Boise State Public Radio. This dispatch is part of a series called “On the Ground” with Report for America, an initiative of The GroundTruth Project. Follow Rachel on Twitter: @racheld_cohen.