The siege of American democracy 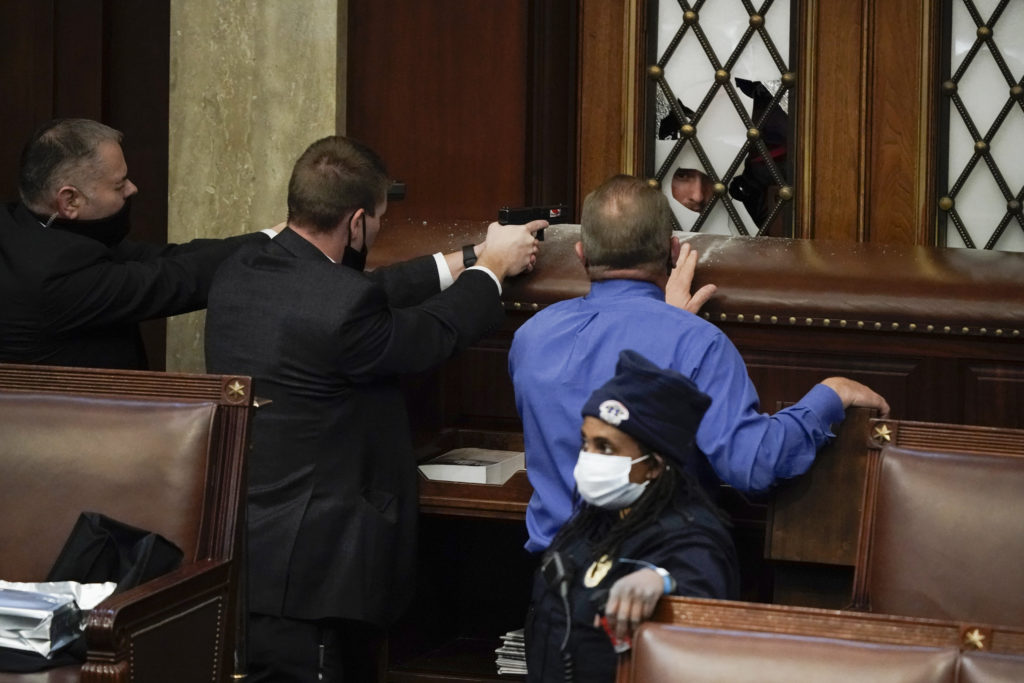 Police with guns drawn watch as protesters try to break into the House Chamber at the U.S. Capitol on Wednesday. (Photo by AP/J. Scott Applewhite)

The attack on American democracy came from all sides yesterday while the whole world was watching.

It came from the top as President Trump incited a violent insurrection, a fact that is now at the center of a debate as to whether Trump should be removed from office either via the 25th Amendment, when a majority of the cabinet and Vice President can deem a president unfit to serve as commander in chief, or another impeachment proceeding, recognizing that his actions were illegal.

It came from inside in a cynical and sullen expression by more than 100 members of Congress who supported an initiative to challenge a traditionally ceremonial reading of the votes that gave President-elect Joe Biden a sweeping victory. They claimed widespread voter fraud even though more than two dozen separate court challenges, including one in the Supreme Court, were struck down.

It came from outside the Capitol by the tens of thousands of Trump’s most extreme loyalists – disenfranchised and fearful cult members of a delusional leader who has convinced them that they are victims and that our election was fraudulent – who all gathered on the steps as congress met to certify the Electoral College votes that make Biden the next president.

And then it came together as all of those forces were joined when the mob on the streets, fueled by the intensity of white nationalists and anarchists waving Confederate flags and donning red MAGA hats, crashed through a thin and weak blue line of federal police. Suddenly all of the sides that make up a movement that history will remember as an expression of treason were forged together like a river that has broken its banks.

For years now, I have been writing that these rising waters of deep division are not a reflection of who we are as a country. But it is time to recognize this is indeed who we are as a country. The river of white victimhood and racism is as real and powerful a force in our country as the mighty Mississippi, and the destructive force it can unleash when it crashes over the levy will not be going away any time soon.

What is perhaps most disturbing in all of this is that the world seems to understand the tragedy of this perhaps better than we do. They watched in horror and concern yesterday, and foreign leaders offered words that, like a mirror reflecting back on us, revealed to us just what we have become.

French President Emmanuel Macron said, “When, in one of the world’s oldest democracies, supporters of an outgoing president take up arms to challenge the legitimate results of an election, a universal idea – that of ‘one person, one vote’ – is undermined.”

America, once a flawed but always bright beacon of democracy, was suddenly indistinguishable from so many authoritarian regimes that have seen election violence and attempted coups erupt in their capitals. Even President George W. Bush observed yesterday amid the eruption of violence, “This is how election results are disputed in a banana republic, not our democratic republic.”

And around the world, America’s allies and enemies alike seemed quick to express their opinions on an historic moment in which the deep divisions in America burst to the surface. And in the waves of condemnation and concern, our most formidable adversaries seemed to find it hard to conceal their glee at seeing American democracy under siege.

China sought to draw comparisons between the mob that attacked the halls of Congress to the pro-democracy protesters in Hong Kong who stormed Hong Kong’s Legislative Council.

Russia blamed the “archaic” US electoral system and the politicization of the media for Wednesday’s unrest in Washington.

“The electoral system in the United States is archaic, it does not meet modern democratic standards, creating opportunities for numerous violations, and the American media have become an instrument of political struggle,” foreign ministry spokeswoman Maria Zakharova said.

The descent into violence in DC, spurred on by an authoritarian trying to cling to power, seemed to be straight out of what GroundTruth reported over the last year in a series titled “Democracy Undone: The Authoritarian’s Playbook.” The series explored how rising populist nationalism was surging around the world in places such as Brazil, India, Hungary, the Philippines, and eroding democracy all along the way. Many of the parallels between these countries and the rise of Trump seem almost uncanny, especially the violent reaction to a democratic election when the authoritarian ruler challenged.

Brazilian President Jair Bolsonaro, who has been an ally of Trump and emulated his rise to power, was one of the few leaders who have backed Trump’s completely unfounded claims of fraud in the US presidential election, and Bolsonaro warned the chaos that rocked Washington could also hit Brazil’s elections next year.

He seems to be setting the stage for how he will handle the coming elections, and sharing another page that Trump has offered right out of that ‘authoritarian’s playbook.’ This actually combines two of the classic authoritarian plays:  ‘eroding institutions’ and ‘weaponizing fear.’

Speaking to supporters outside the presidential palace today, Bolsonaro said, “What was the problem that caused that whole crisis, basically? Lack of trust in the election … They maximized mail-in ballots because of this pandemic thing, and there were people who voted three, four times. Dead people voted. It was a free-for-all. No one can deny that.”

Actually, anyone willing to look at facts can deny that claim because there has been no proof otherwise despite Trump’s incoherent assertions that voter fraud happened. One election official after another and one court after another have all asserted the same determination: this was a free and fair election.

Anne Applebaum, in her new book titled “Twilight of Democracy: The Seductive Lure of Authoritarianism,” has articulated a global phenomenon in the Trump era, how a rising force of populist nationalism is ricocheting around the world. She points out in a just published article in The Atlantic that it is not so much Americans that will suffer from the way the United States’ image — and more importantly the solid example it has long set — was tarnished by the images of the Trump-incited mob violence. But it is pro-democracy fighters in places like Beijing, Moscow, Tehran, Riyadh, and Caracas who will suffer most.

She writes, “After yesterday, they will have one less source of hope, one less ally they can rely upon. The power of America’s example will be dimmer than it once was; American arguments will be harder to hear. American calls for democracy can be thrown back with scorn: You don’t believe in it anymore, so why should we?” 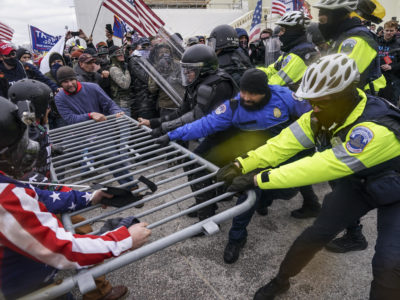 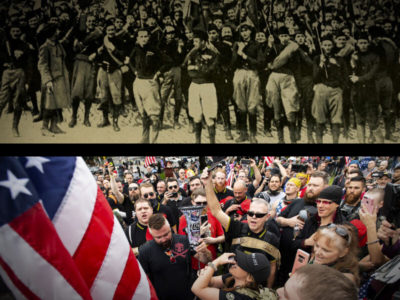