The risks and challenges of covering the Amazon 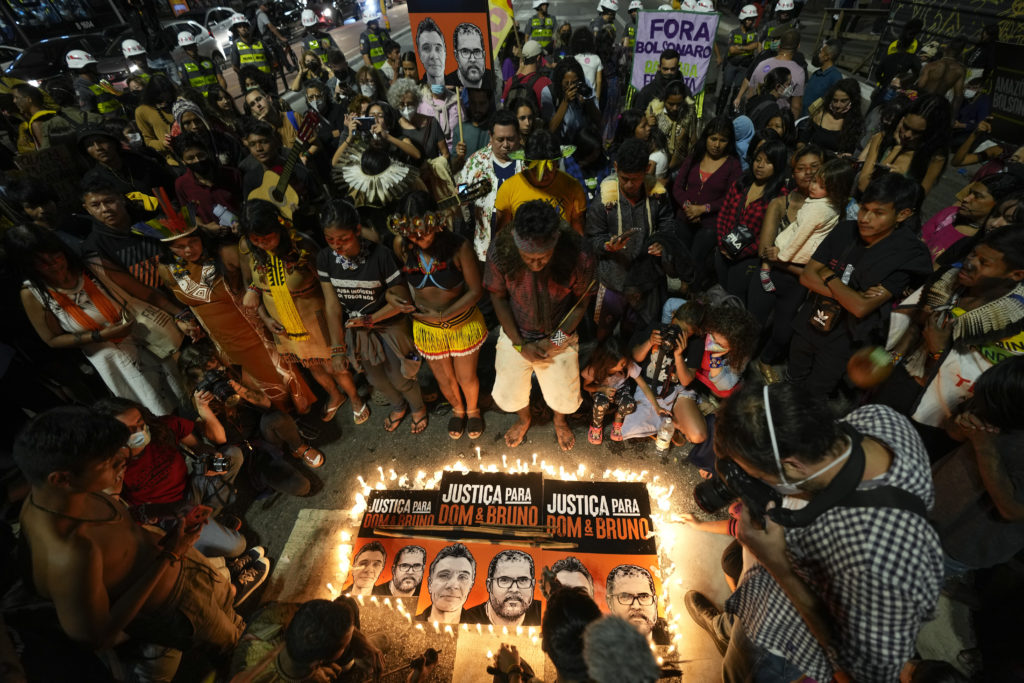 The murders of the British journalist Dom Phillips and Brazilian indigenous expert Bruno Pereira during a reporting trip in the Brazilian Amazon have once again exposed the risks for those investigating environmental issues and indigenous communities.

Phillips and Pereira were murdered last month in the Javari Valley, close to Brazil’s border with Peru and Colombia, sparking outrage and condemnation around the world, as the case is the most recent chapter of a long and violent conflict in the region. The Amazon is not only the world’s biggest rainforest but a route for all sorts of illegal activities threatening indigenous rights and environmental protection, including illegal fishing, mining, logging and drug-trafficking.

The bodies of Phillips and Pereira were found in pieces after 10 days of missing. The police have arrested four suspects linked to illegal fishing for the murders. The investigation continues as activists and indigenous communities claim they did not act alone, believing a powerful criminal organization was behind the killings.

Report For the World corps members Fábio Bispo and Jullie Pereira (no relation to Bruno,) from our newsroom partner InfoAmazonia, reflected on the lessons and consequences of the case for journalists that, like them, keep working every day to uncover the same issues that Phillips and Pereira were trying to expose.

GroundTruth: The case of Phillips and Pereira reminded the world of the risks for those covering the Amazon. How different is covering the region compared to other regions in Brazil and/or the world? What unique challenges do you face there?

Fábio Bispo: The Amazon stretches across a very extensive area, with unique characteristics. As it has a large part of its forest still preserved, one of the main challenges is accessibility. Accessing most of the territory is only possible by rivers or roads in bad conditions. It takes planning and patience to face these long journeys, in regions where internet and phone communication are also problematic.

The presence of the state to ensure environmental and indigenous people protection has been lower and lower under the current administration of President Jair Bolsonaro. This has served as a sort of safe conduct for criminal actions. As a result, when we enter an area of unleashed conflict, which has been increasingly common, the only thing we know is that, in the case of any emergency, we are unlikely to count on the state security forces for help.

GT: How has the case of Phillips and Pereira has affected your work and the work of other journalists covering the region? Has the sense of insecurity increased or it felt more like an announced tragedy? Has your routine changed?

Bispo: The tragedy involving Dom Phillips and Bruno Pereira took a reality that was already known to journalists and environmental activists working in the Amazon to an extreme: the abandonment of traditional peoples and the preservation of the largest tropical forest in the world. The barbaric way in which this crime took place and the disastrous response of the Brazilian authorities only created more insecurities for everyone who lives and works in these territories.

Jullie Pereira: This feeling of risk is frequent and yes, when we are faced with such an announced tragedy, still full of unanswered questions, it is inevitable not to think “could it have been me” or “could it have been that closest colleague or ours”. As for the routine, the instructions we have from the editors are not to forget what happened and keep looking for the answers. We will keep working to understand the contexts within the Javari Valley Indigenous Land, and investigating what Bruno and Dom themselves were investigating.

GT: What would you like the world to understand beyond the tragedy in itself? And which tips would you give to other journalists interested in covering conflicts related to environmental and indigenous issues?

Pereira: It is essential that the discussion around the security of Brazilian indigenous peoples and those who protect them is constant and that the actions promoted by this case generate results beyond the official statements. The fact that there was a British journalist involved in this tragedy helped the world to turn its eyes to the region, and this international pressure provoked actions and reactions. We need coverage in the Amazon to be permanent, and for the Brazilian government to be held accountable worldwide.

Bispo: As for tips, first of all, it is important to have good planning, with routes, reference contacts in the visited locations, and contact with organizations that already work in the territory. And as much as we know that on the field things can be different, a good plan should always include the possibility of a setback or delays. We would recommend for journalists also to find out more about the region to be visited, which people live there, what are their main habits and what the geography of the place looks like. And, finally, always keep in regular contact with their immediate editor.