Postal Service can ‘deliver democracy’ in November. But partisanship could limit where. 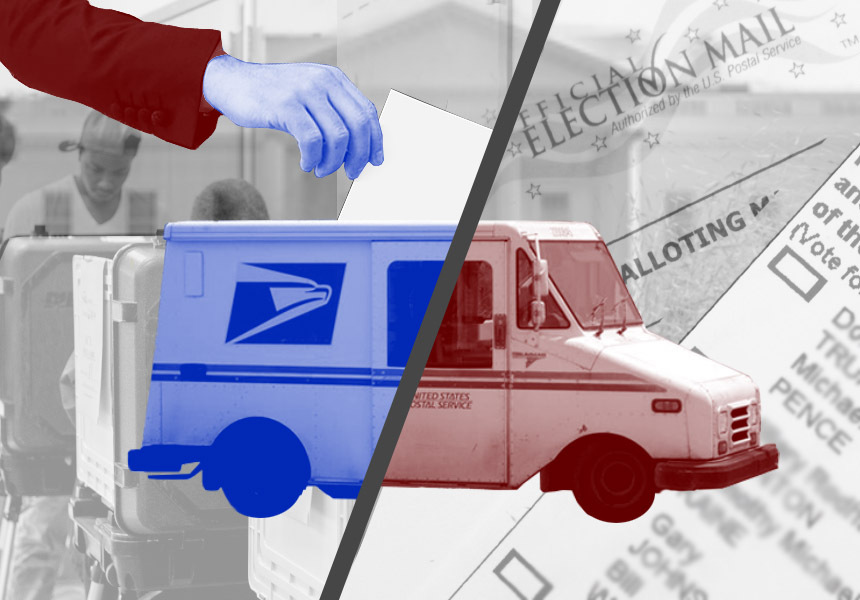 The biggest question for American voters this fall might not be who to vote for in the 2020 general election, but how to cast their vote.

“In this moment, their ballot box might be their mailbox,” said Tammy Patrick, who worked as an election official for over a decade in Arizona before serving on the Presidential Commision on Election Administration and now works as senior election advisor to the bipartisan foundation Democracy Fund.

With more states turning to voting by mail, and fewer voters comfortable with voting in person, a greater share of the responsibility of “delivering democracy,” as Patrick puts it, could be shouldered by the U.S. Postal Service than in previous cycles.

But at the same time, the agency is becoming increasingly politicized. And voting by mail, an operation it helps facilitate, is becoming a partisan rift.

In a major shift last week, the agency’s board of governors announced that Louis DeJoy – who has donated over $1 million in support of Republicans, including the president, in the last year alone – was tapped to take over as the new Postmaster General starting in June. Mark Dimondstein, president of the American Postal Workers Union, expressed concern that the administration “has returned to the days of political interference and patronage.”

“The new postmaster general, certainly on the surface, got the job because they are a huge donor … to this administration,” he said in a Facebook Live conference Wednesday.

DeJoy is succeeding Obama-era appointee Megan Brennan, who has led the post office through half of a financially difficult decade.

In April 2019, Brennan told Congress that the agency would be “out of cash” by 2024. She testified again this April to say that, because of COVID-19, the money would run out by September. Last week, USPS announced a net loss of $4.5 billion for the quarter, doubling its net losses at this time last year. The pandemic, it said in a statement, will further “threaten the agency’s ability to operate.”

There has been growing concern that these financial woes could disrupt the election in November.

“If the post office is not there to deliver, we won’t have an election, or any kind of fair election,” said Dimondstein in a virtual press conference late last month. The union president joined Republican Kim Wyman, Washington’s secretary of state, and Democrat Jim Condos, secretary of state for Vermont, in support of the USPS, stressing its vital role in U.S. elections.

“Simply put, mid-election year is not the time for changes to the dependability of the Postal Service, especially not during a year in which our country is experiencing a pandemic and health crisis, which will dramatically increase the necessity of voting by mail for so many Americans,” said Condos.

A package of $25 billion to prop up the faltering Postal Service proposed by Democrats in the House was announced Tuesday, but a GOP blockade of the relief is expected should it move to the Senate.

“I don’t believe that the Postal Service will stop delivering mail,” she said. “The important thing will be that we stay on top of when and where there are any delays or disruptions of service because that can happen. We see it in hurricanes and tornadoes and … we may see it with COVID.”

There are other forms of disruption, however. The president has urged his party to fight the expansion of voting by mail.

“Democrats are clamoring for it,” President Trump said in an April 8 tweet. “Tremendous potential for voter fraud, and for whatever reason, doesn’t work out well for Republicans.” Though even he voted by mail for the Florida primary, a state where the GOP relies on mailed votes.

Republicans should fight very hard when it comes to state wide mail-in voting. Democrats are clamoring for it. Tremendous potential for voter fraud, and for whatever reason, doesn’t work out well for Republicans. @foxandfriends

But election officials from both sides of the aisle have said that fraud is not the issue.

Washington State Secretary Kim Wyman has pointed to data from the Electronic Registration Information Center, a nonprofit that assists some 30 states with voter data-matching. During Washington’s 2018 election, 140 people were found to have voted more than once or under a dead relative’s name out of 3.2 million voters statewide.

“Is it perfect? No,” the Republican said. “Is it rampant fraud? No, and I think that the other thing that voting by mail does is it balances out that good security with really wide access for our voters.”

A study published last week by Stanford University’s Democracy and Polarization Lab found that voting by mail gives no advantages to either party and only increases turnout by 2%. Even so, the Republican National Committee is preparing itself for legal fights, doubling its budget for litigation to $20 million; many a court battle will be had over the expansion of mail-in voting in battleground states.

“I believe that discussion about voter fraud, although it can occur, is so small,” said Condos. “And I think that by trying to raise it as many often do, it is more detrimental towards voter suppression, which I think is the real issue that we have to watch out for.”

All mail-in voting is not a perfect solution to voting in a time of social distancing. Voting rights activists have raised concerns about unintended consequences of a completely remote vote. The NAACP and Center for American Progress called on states to preserve the option to vote in person amid COVID-19, or else millions could be disenfranchised.

Legislators in at least one state, Colorado, are looking to make the vote more accessible to Native Americans. The state is among six that already sends ballots by mail to all voters (California became the sixth last week, in light of the pandemic) and is considered a national leader in expanding voter access. Now states like Utah are moving toward Colorado’s mail-in model.

Colorado reformed its voting system in 2013, bringing into effect universal, mail-delivered voter registration with limited, in-person early voting centers. More than 90% of all the state’s eligible voters registered in 2016 and three-in-four Coloradans returned their mail-in ballots. The nonprofit Vote at Home attributes this success to factors including pre-registration of 16-year-olds to ensure they will be automatically registered when they turn 18, online voter registration and voter registration as part of application procedures at motor vehicle offices.

Pam Anderson, head of the Colorado County Clerks Association, has seen these changes up close in her eight years as a clerk. She said the system took some time to evolve, and recalled how 10% of mailed ballots within her county initially came back as undeliverable.

“That number went down below 4%” by 2014 with modernization of its registration list, she said.

But ahead of November, states like California are attempting to do in months what took states like Colorado years of trial and error to do.

“And that’s really the most important piece of it is to make these decisions at this time so that there’s plenty of time to prepare,” said Patrick. A former election official herself, with more than a decade of experience, she said states will need that time to handle logistical challenges. Instead of election officials having to hand-stuff the increased quantity of envelopes sent out, for example, “you have a print vendor that has a machine that can do 50,000 of them an hour instead of your staff of three people doing 25 an hour.”

States red and blue are adapting to the challenges of COVID-19 ahead of the election in November. But partisans in some states’ legislatures continue to squash attempts to make it easier to vote by mail.

In spite of that partisanship though, Patrick said she believed that there are enough patriotic Americans that understand what’s at stake – across the country, and across agencies, departments and divisions of the government.

“That’s what I’m going to continue to bank on,” she said, “Otherwise, I’m going to go curl up into a ball in the corner.”