The optics of the end of the Afghanistan War 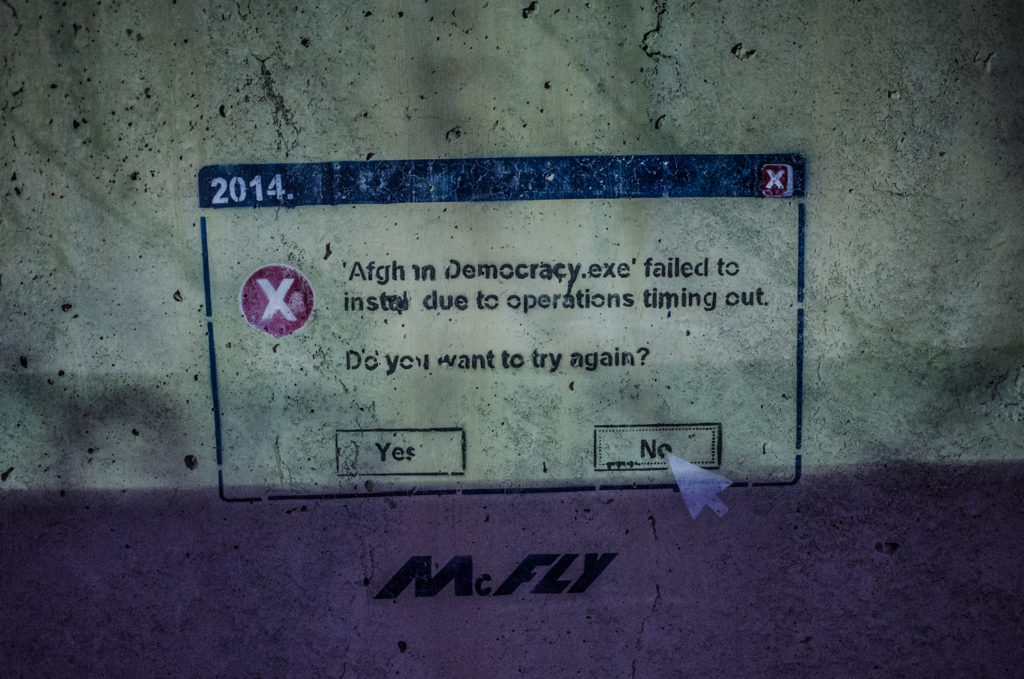 Stenciled on a blast wall at Kandahar Airfield, a soldiers' gallows humor echoes the uncertainty of Afghanistan's future. (Photo by Ben Brody/GroundTruth)

President Biden’s recent announcement that all remaining U.S. troops in Afghanistan will return home by Sept. 11, 2021, is a gesture that is poignant and clumsily theatrical at once.  It’s difficult to tell whether that policy only applies to the 2,500 U.S. troops who are “officially” in Afghanistan, or if it also includes the thousand-plus special operations forces who are not in the Pentagon’s official tally, and the 7,000 NATO and allied troops who largely rely on the American military for security. Not to mention thousands more Americans who are employed by the military and the State Department and various non-governmental organizations as “contractors” in the vast enterprise of the American effort in nation building that is going on in Afghanistan.

I spent most of my adult life either fighting in or photographing the so-called Global War on Terror, in Iraq as a soldier, and in Afghanistan for many years as a photojournalist primarily doing media embeds. The media embed program, which ended in 2014, made military operations in Afghanistan accessible to any professional journalist, including freelancers, who were in possession of body armor, a helmet and the stamina to fill out reams of paperwork.  For most people, the war in Afghanistan was defined by visually arresting actions: huge troop deployments to seize and hold territory, massive ordnance drops against insurgent strongholds, and partnership with Afghan security forces.

Those facets of the war were made accessible by the military, and thus were dutifully documented by legions of western photojournalists, myself included.  They were also reinforced to most Americans through helmet-cam videos of soldiers fighting in the mountains and poppy fields, drone footage of thunderous airstrikes, or fictionalized in film, television, and video games. Photographers’ best attempts at capturing the “iconic image” were buried under the sheer volume and visual sameness of imagery coming from the media embeds.

That’s not by mistake, but by design. The operative philosophy behind the media embed program was the military’s belief in its approach to the media was that by sharing meals, lodging, effort and risk with the soldiers they were covering, the “embeds,” as they were called,’ reporting would skew positive because of the bonds of affection created by this proximity.

You signed ground rules when you embed, and the most restrictive rules dealt with photographing American casualties. Photographs of a wounded soldier require that soldier’s written permission, which was often impossible to obtain, before the picture can be released. Even if you did get permission and release the pictures, it became difficult to get new embeds.  As the U.S.’ ground combat burden in Afghanistan was increasingly shifted to special operations forces, that threw up another roadblock for journalists – SOF missions are generally classified.

Instead of trying to navigate those roadblocks, I focused my work on the theatrics of their stage-managed embed process for GroundTruth’s landmark project Foreverstan.  I photographed things like motivational posters on razor wire-ringed blast walls, lonely barricades scattered across desolate mountain ranges, and landing helicopters blinding me with a maelstrom of debris. I think the military public affairs apparatus eventually became frustrated with it, , but I felt that photographing from that viewpoint gave me the clearest approach to the war’s chasm of dark absurdities.

Now that the US military’s mission in Afghanistan has finally been clearly defined as a counterterrorism mission, appropriately staffed, and reasonably effective at managing American regional interests, it seems completely on-brand for the U.S. military to cancel the mission and “bring the troops home” on a timeline that is more symbolic than sensible.

This withdrawal presents challenges and opportunities for Afghanistan. Most Afghan journalists I’ve spoken with feel that the estimated $1 trillion occupation has created a culture of graft and greed, and that the American withdrawal is Afghanistan’s best opportunity to become a sovereign, united nation again. The Taliban remain a grave threat, and it is unclear whether Afghan security forces will be able to hold on to power in the long-term.  Of course, a Taliban return to power would have grave consequences for women’s rights, education, and health care.

But visually, what will it look like?  With the U.S. military gone, it’s influence on photojournalism will fade as well.  Your best bet is to follow the work of top Afghan photojournalists, some of whom I’ve had the privilege of working with, and a few westerners who have made a deep and lasting commitment to representing Afghanistan.  I highly recommend following the work of Mohammad Omar Lemar, Kiana Hayeri, Farshad Usyan, Andrew Quilty, Jim Huylebroek, Najiba Noori, and Everyday Afghanistan.

The visual record that they create will be far more valuable than any one “iconic” image.

Ben Brody is Director of Photography for GroundTruth and Report for America, providing training and mentorship for corps members and editing for visual fellowships. Brody spent most of his career photographing the wars in Iraq and Afghanistan, first as a soldier, and later as a civilian working on The GroundTruth Project’s multimedia project Foreverstan.He holds an MFA in photography from Hartford Art School and is the author of the critically-acclaimed photobook Attention Servicemember.