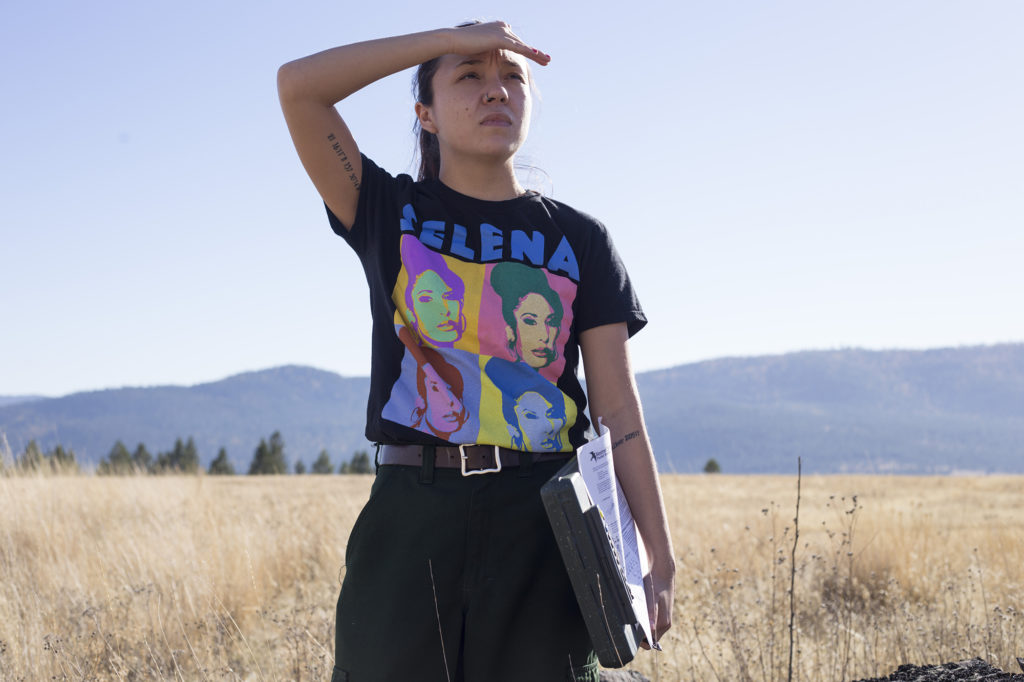 Fuels monitoring assistant Emily McCrea, 23, watches over a prescribed burn by the Confederated Salish and Kootenai Tribes Division of Fire just outside of Elmo, Mont., on Tuesday, October 24, 2017. McCrea was one of only two women working on the burn site that day. Tribes used prescribed burns long before European settlers arrived. Burns are made using a quilt technique that serves as a barrier preventing more intense fires from spreading. (Brittany Greeson/GroundTruth)

Lizzie Jones sat quietly looking over patches of dirt and gravel as a warm wind pushed gold strands of hair from her face. She had come to visit her parents, both of them buried in the hillside of eastern Kentucky. Sitting quietly, letting herself “just be,” was her way of having a dialogue with them. “Even though they are not here, I feel like their memories are still alive,” she said.

Three years ago, Lizzie’s father passed after a tumultuous battle with black lung disease. Just over a year ago, her mother followed. Lizzie still isn’t positive what killed her mother — she has a theory that part of it was the heartbreak from losing her life-long partner. Both of Lizzie’s parents were proud coal miners; they even met in the mines.

Still, Lizzie has a complex relationship with coal. She understands that her parents’ killer was the very thing that gave them a stable life. She sees herself as an example of both the prosperity and devastation the coal industry brought to Appalachia.

Throughout the 2016 election, as pundits, politicians and journalists passed through this hurting region, they failed to grasp the complexity of Lizzie’s experience, the experiences of others like her. During such a significant moment in history, why were the young women — for whom the national issues weren’t just a talking point, but a deep part of their personal experience — still underrepresented? Because of stories like her own, Lizzie wants to someday become one of those journalists, but better.

Lizzie and I were born into a world shaped by generations of women before us, who fought so that they could be recognized as more than second class citizens. Yet, we came of age in a perplexing time for women. Despite the aspirational thought that we could be anything, the reality is that women’s ambitions are still limited. We were told we could be president, yet we were never seriously considered as contenders. We make up over half the population, yet we are still heavily underrepresented in politics, in boardrooms, in media and have little influence in public life.

Women’s lack of influence has left deafening silence in our country. And the silencing of women — all women — whether it be in a bar room conversation, a board meeting or in national politics, has created an underserved democracy.

Then in 2016,  after 44 elections, the first female was nominated as a presidential candidate for a major party. Some of us felt a glimmer of hope. Some of us felt a slap in the face that our option was limited to just one major party candidate. Regardless, a man — who admitted to sexually assaulting women — was elected. The women I grew up with, white women without college degrees, helped put him there. I got closer to an answer for how much progress women had really made.

By the time Donald Trump was in office, I set out on a cross country journey with a team of reporters to understand why our country had become so divided. Along the way, I kept meeting young women like Lizzie, young women who were living the issues that shaped the election and appeared to divide a nation: the significance of faith, the complexity of coal country’s grievances, racial tension, and immigration.
I saw an opportunity to use their photographs to challenge decades of inequality.

I learned that womanhood is not easily defined. It is not a box that can be easily checked, but is instead a multifaceted existence where gender identity, sexuality, race, and class all play a crucial role. Our country is not “red or blue,” but rather a patchwork of political persuasions and experiences. This election may have turned out differently had our country figured that out sooner.

I know women’s rights and women’s positions in the United States are at a turning point. However, I’m unsure if I’ll see bona fide equality in my lifetime. I see hope from the women who brought down sexual predators in Hollywood and government, and the surge in interest from women who want to run for office following the election. But I see darkness when women are pitted against one another. By exploring the lives of up and coming creators, thinkers, and leaders in this photo essay, we are getting a free preview of our country’s future.

See Brittany’s photography from the Crossing the Divide project.