The mysterious murder of a Bangladeshi labor activist 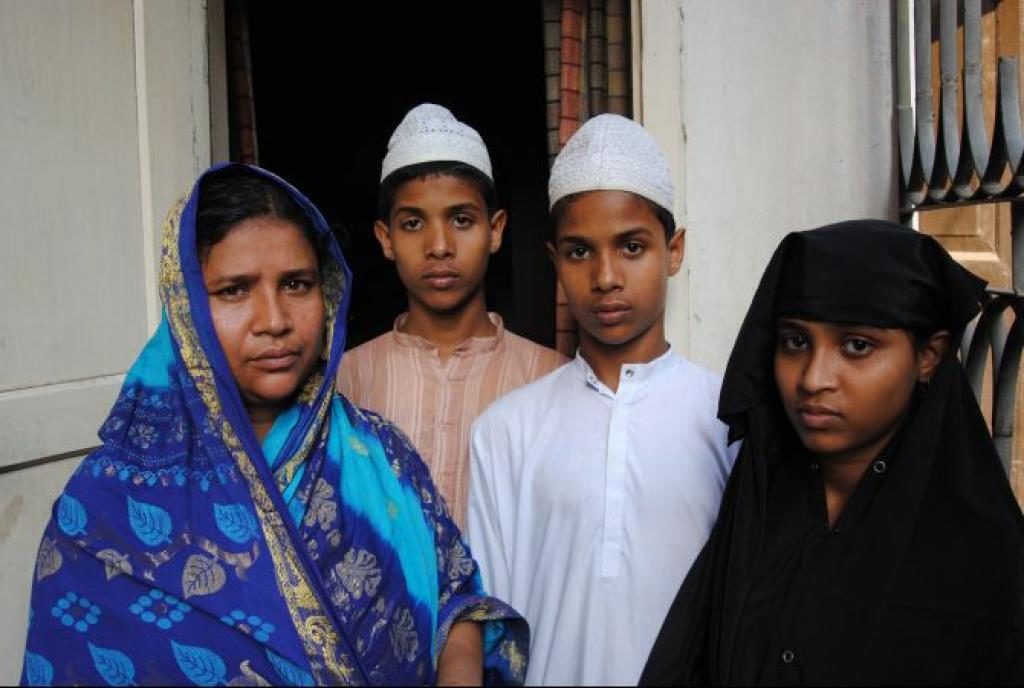 The family of Aminul Islam at their home in Kaliakoir, Bangladesh. Islam was found murdered, his body tortured, on April 6, 2012. - ((Asif Imteaz / Global Post))

DHAKA, Bangladesh — The body turned up in the northern district of Ghatail, dumped by the roadside near a police station. The victim’s toes were smashed, his ankles crushed. A hole had been drilled below one of his knees.

Last seen breathing on April 4 near his office in the outskirts of Dhaka, Aminul Islam was a labor activist and a thorn in the side of the powerful garment industry of Bangladesh, the second largest exporter of clothing in the world. The United States receives 80 percent of these exports, the largest beneficiary of what labor advocates have called the “race to the bottom” in terms of wages, benefits and job security.

His colleagues say Islam’s murder was retaliation for standing up for workers’ rights in Bangladesh, which has the lowest wages in the world and where a series of factory fires has claimed more than 300 lives in recent years. They fear that his case will never be solved because they suspect the police leading the investigation may have been involved in his death. The marks of torture on his body when it was discovered April 6, they say, were not unlike those he had endured at the hands of police and national security forces many times before.

Islam, who was a leader of the Bangladesh Center for Worker Solidarity (BCWS), is not the first person to meet such a fate. An estimated 200 people — politicians, journalists, and activists — have ‘disappeared’ under suspicious circumstances in Bangladesh since the present Awami League government came to power in 2009.

In the days before his death, Islam, 40, had been registering complaints of workers at Shanta Group, a company producing American apparel for Tommy Hilfiger, Nike, and Ralph Lauren. He suffered months of internal bleeding in his right ear after a previous encounter with the country’s National Security Intelligence (NSI), had a history of getting regularly picked up and tortured by police and intelligence agencies. Less than 1 percent of the country’s workers are represented by trade unions while 10 percent of parliament is composed of garment factory owners.

“There are serious concerns that government security forces might be responsible for his torture and death,” wrote Phil Robertson, the deputy Asia director for Human Rights Watch, in a letter to Bangladeshi Prime Minister Sheikh Hasina. The group has called on Hasina to launch an impartial investigation into Islam’s killing, the third time it has written to the prime minister about Islam in the last two years.

“He had so many enemies,” said Hosne Ara Fahima, Islam’s wife of 19 years. “His death was work related, of course it was because of his work. He had no enemies in his private life. Everyone in Kaliakoir knows Aminul Munshi [an Islamic honorific], he is famous here.”

Bizarre circumstances marked the day Laboni Akhter last saw Islam, who had been her mentor since she joined BCWS six years ago. Islam noticed a police van waiting outside their office branch in Ashulia, a hub of the country’s garment industry. Nervous, he suggested to Laboni they lock up and leave early.

Before they were done, a garment worker called Mustafizur Rahman arrived, asking for Islam’s help, Laboni said. His request was an unusual one.

“He was with a girl and wanted Aminul bhai [brother] to marry them. The girl was covered from head to toe in a burkha, her eyes the only visible part of her body. She didn’t give her name, she didn’t say anything. She was quite healthy, a large girl. Much bigger than me,” Laboni recalled.

Islam refused the request for an unofficial marriage ceremony and sent them away. The two BCWS colleagues closed their premises and left through a back entrance, intending to travel together for as much of their routes home as they could, a practice they had begun in response to harassment of BCWS staff by security forces.

But their journey was interrupted by a call from Rahman. He pleaded with Islam to meet him and the girl.

“He just kept asking and asking, saying she had run away from home, that they had a lot of money on them, that they had to leave Dhaka that night, that they could get into a lot of trouble if they were traveling as an unmarried couple,” Laboni said.

The two parted ways. As always, Laboni asked Islam to call her when he arrived home so she would know he was safe.

“He was very labor rights motivated,” said Kalpona Akhter, the founder of BCWS. “If someone called at 1 a.m. he’d be there to help.”

Accusations of responsibility for Islam’s death have focused on Bangladesh’s security forces and Shanta Group managers.

The BCWS team has focused its attention on the garment worker Rahman and the women he said was his bride-to-be.

But Islam’s colleagues believe that Rahman was a pawn of the people who killed Islam, while some suspect the burkha-clad woman was actually a male security agent.

Rahman could not be reached until two days after Islam vanished, and after a brief period when he was in contact he has dropped off the radar again, with no one able to find him.

Workers at Shanta Group suspect some of the company’s managers are behind the murder, according to BCWS.

The troubles at Shanta began in March, when workers approached Islam and Laboni claiming managers were beating them and sexually harassing female colleagues. On March 9, police burst into BCWS’s Ashulia office, snapped a photo of Laboni, and dragged Islam off to jail.

Islam was charged with plotting to gather 30,000 people for an opposition party political rally, even though Islam had voted and campaigned for the incumbent Awami League party in the 2009 elections.

“Whoever called the police with these false charges is behind the killing,” said Babul Akhter, president of the Bangladesh Garment and Industrial Workers Federation, who had worked closely with Islam.

Babul said he is not sure if the police are responsible. “The marks on his body, the signs of torture, it’s very similar to what the NSI did to him before,” he observed.

Babul speaks from personal experience. Along with Kalpona and Islam, he has paid dearly for the 2010 garment industry riots, when workers rose up and vandalized factories in protest of the minimum wage of that time, which was below the poverty threshold of $1 a day.

The three were thrown in jail. “[The police] thought we were instigating things. They didn’t realize this was really a case of workers rising up for themselves,” Babul said.

“They accused us of anti-state activity. Well, when 10 percent of parliament members are garment owners, what do you expect?” Kalpona asked.

While in custody all three were harassed; Babul and Islam were beaten and physically tortured.

“They blindfolded me, pushed me to the ground, and beat me in the back with a fat stick,” Babul remembered. “They said they’d cripple me, or kill me in a ‘crossfire’ incident. They kept shouting at me, asking ‘will you speak about workers’ rights again?’”

“I was interrogated for 18 hours straight,” Kalpona said. “The last four hours were 11 people in the room yelling the same question at me over and over. Medical reports say that I still have panic disorder.”

Their treatment sparked an outcry from international watchdogs, leading to their release. Kalpona presented a petition to Walmart CEO Mike Duke at its annual shareholder meeting last year, appealing in vain for the retail giant — the Bangladeshi garment industry’s single biggest customer — to intervene on behalf of Islam and BCWS.

BCWS’s staff continues to fight multiple lawsuits filed against them by factory owners.

“[Islam’s murder] was a long time coming,” said Zia Ahad, who has worked for Reebok and GAP. “He was already targeted, he was a marked man since 2010. If the industry is implicated, then heaven help the industry.”

Islam’s murder has terrified activists across the country.

“Every moment now we think someone is following us,” Kalpona said. “We feel the vultures are circling around our heads now. Our colleagues are having nightmares.”

As she was speaking, Kalpona was interrupted at one point by Laboni, who was scheduled to attend a meeting with Shanta Group workers. “I was thinking that this time maybe I wouldn’t go,” Laboni requested.

“She has never asked for that before,” Kalpona said after Laboni left.

Kalpona has been involved in the industry since she was 13, when she began working in a factory as a child laborer.

She became a labor activist at 18, when she started to teach herself English. Fluent now, she describes her experiences as motivation for her crusade.

“I suffered. My supervisor used to slap me. I didn’t know anything about overtime pay. I lost my work because I complained, I was blacklisted. There should not be any more Kalpona,” she said passionately.

Twenty-eight-year-old Laboni, in contrast, entered directly into work with BCWS. Islam’s protégé has been rattled perhaps more than anyone else by his horrific death.

Startled by loud noises, jumpy whenever people come up next to her, she is now on sleeping pills and has frequent nightmares of Islam coming to take her away.

“Aminul bhai gave me a lot of my courage to do my work, he used to reassure me when I was scared,” she said. “The way they killed him, they must have had so much anger for him. We worked together in the same office for a long time, they must have the same anger toward me.”

Her initially supportive family and husband are now so worried for her safety they don’t allow her to leave the house, and want her to quit.

“I always think tomorrow might be my turn. Maybe that’s what they wanted, to scare us into leaving. I don’t think I should leave, but there’s a lot of pressure on me.”