The fight over Poland’s right-wing policies 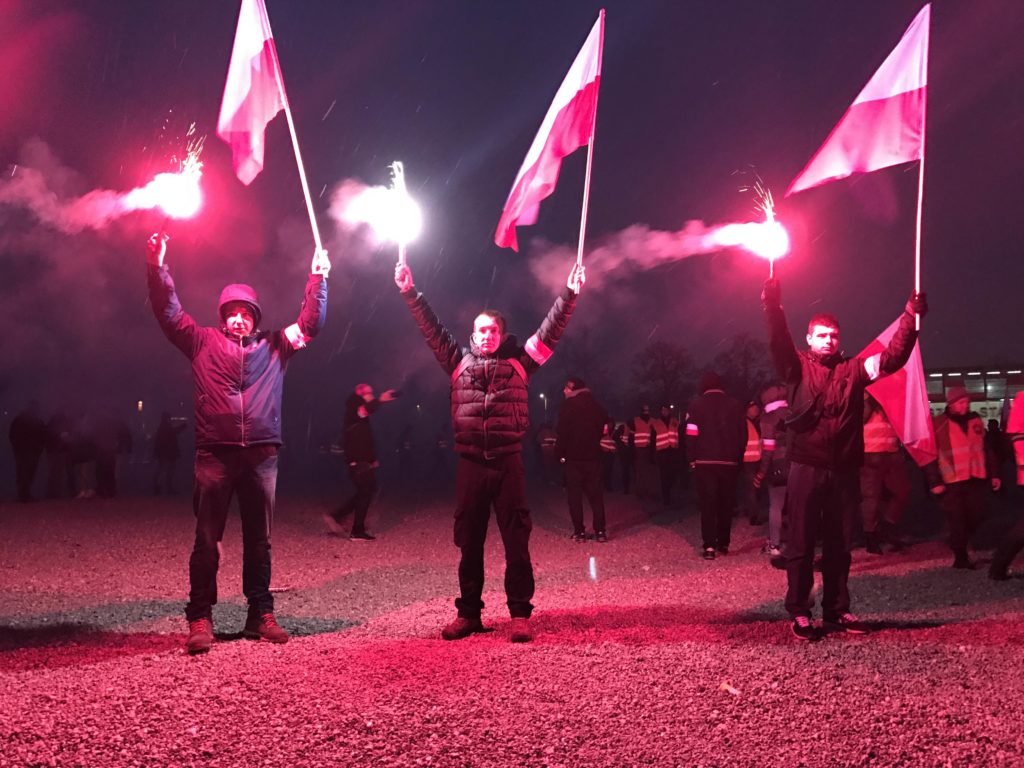 WARSAW – In a country beset by lawmakers’ efforts to limit freedom of expression, Marta Lempart calls herself a “professional protester.”

Lempart, a 37-year-old lawyer from the western city of Wrocław, has quickly become one of the strongest voices against the PiS government, building a coalition in which women have leading roles. Lempart comes from a family of tenacious women – her mother established Poland’s first NGO for deaf children during communist rule – and her colleagues say that with fervor and a necessary dose of humor, she inspires those around her to mobilize.

“Everyone is saying, there is no going back,” Lempart said. “There’s no way to stop us once we hit the boiling point.”

Until they were removed by police after four days, opposition MPs refused to leave the parliament building, demanding that newly proposed restrictions on Polish media be dropped as citizen supporters protested outside in the frigid cold. The proposed laws would ban all but select, accredited journalists from parliament.

And members of oppositional parties and civil society mobilized throughout the weekend in Poland’s greatest anti-government demonstrations since the Solidarity movement fought the communist regime. On Monday, Polish President Andrzej Duda announced that PiS lawmakers had pulled back on the media bill, part of a cat-and-mouse game between the ruling party and pro-democracy protesters.

“It’s going to get a lot worse before it gets better,” said Lempart, referencing the global shift to the right that has elevated nationalism over international cooperation and shows of force over civil liberties.

A few months after PiS won a majority in parliament last October, led by party chair Jarosław Kaczyński, it passed a media law empowering the government to appoint and dismiss executives of public television and radio. For Lempart and many others, this triggered the first rumblings of concern that Poland was taking steps away from democracy.

Lempart began by organizing local demonstrations against the conservative administration as the government crept further to the right. As the refugee crisis escalated, much like other countries in Central Europe, Poland sealed its doors. And like many left-leaning groups, KOD protested. The tension between PiS and KOD didn’t stop there.

In October, PiS supported a proposed law that threatened a total ban on abortions in the predominantly Catholic country. Lempart and 6 million other women across Poland cut work, grabbed their umbrellas, and marched through the frigid rain. The government struck down the law that same week. But Lempart didn’t declare victory.

After the proposed bill that would criminalize abortions was struck down, the pro-life group which – makes up about one third of the PiS voters – voiced their disapproval. The government responded with the “Pro-Life” law that will go into effect in January.

And as the government advances its staunch connection with the Catholic Church and works to impose new laws on media, women’s rights and demonstrations, civil unrest continues to percolate.

In the past, the Church worked with the Polish people to mobilize against an undemocratic communist regime that attempted to dismantle their power, said Bohdan Szklarski, a Polish political scientist and director of the American Studies Center at the University of Warsaw. However, the current government’s monetary and symbolic support for the Church to remain a dominant component of Polish society acts as an incentive for them to abstain from criticizing the current leadership.

On Dec. 3, KOD issued an “Appeal to all Poles,” where they outlined ways in which they believe the current government is destroying the country by impeding freedoms and economic growth. Lempart helped craft the letter and is one of the signatories along with Poland’s former president and leader of the Solidarity movement, Lech Wałęsa.

As the letter instructed, several thousand Poles clogged the streets on Dec. 13, the 35th anniversary of the establishment of Martial Law under communism. These present-day marchers protested the “destruction of a free and democratic Poland.”

After the inauguration of Poland’s right-wing government, the country has seen its largest protests since Solidarity’s mass mobilizations throughout the 1980s, which helped bring down the communist regime in 1989.

Young women in particular say they feel attacked by the current administration, and the formerly proposed abortion laws were not their only concern. Stopping violence against women doesn’t appear to be a priority for the Polish government. Each year, the government closes several centers for domestic violence survivors and, this year, the Ministry of Justice refuse to grant funding for the Women’s Rights Center.

And now, parliament is discussing a withdrawal from the Convention of the Council of Europe on combating violence against women and domestic violence. Just as one might think, the government’s proposals and proceedings is driving young women further to the left. Like in many countries, young men continue to identify with beliefs further to the right.

Feeding off of one another, far-right parties are thriving all over the world, from the Philippines to Israel to France. In neighboring Slovakia, the Kotleba party, which openly uses the Nazi salute, won 10 percent of the seats of parliament in March. And with the election of Donald Trump in the United States, “alt-right” leaders like Richard Spencer say white nationalists “now have a seat at the table.”

According to Szklarski, young people in Poland are feeling lost in a more globalized world and are suffering a lack of identity. In a country where about 96 percent of Poles identify as Catholic, the Church provides a sense of nation and the government encourages it.

In arguably the state’s largest act of alignment with the church, the government just symbolically crowned Jesus Christ as the King of Poland.The Catholic Church has remained a place of solace and identity for Poles at times when they had been stripped of comfort, explains Szklarski. During the 123-year occupation by the Russian Empire which ended in 1918, the Church was a safe space where Poles could speak their own language and engage in familiar traditions.

“The Church became the only place of refuge for Polishness when borders were gone,” said Szklarski. “It survived when Poland disappeared.”

Brutally persecuted during the Nazi and Soviet occupation of World War II, the Church continued to serve its purpose as a unifier of Polish people under communism through faith in a common tongue.

As the opposition movement grew, the Church truly became the primary space where rebels could congregate and mobilize towards independence. By the late 1980s, attendance at Mass hit historic highs. And when communism collapsed in 1989, the Church acted as mediator between the Solidarity movement and the government during the Round Table Talks.

Tomasz O., a 28-year-old camera operator who voted for PiS and the current president stressed the connection between the Church and Poles during communism. He said he recently visited the grave of Father Jerzy Popiełuszko, a priest who was murdered for supporting Solidarity.

“That fight for freedom during communism was strongly enhanced by religion,” he says.

Lempart values the revolutionary role the Church played during communist rule but said it’s time to move on.

“The Church supported the opposition very much,” she says. “It was a debt to be paid, of course, but it was 27 years ago. Come on, I think we paid already.”

Lempart said the PiS-led government supports the Church because although they value what they have done for Poles, they truly appreciate the leverage the Church has on voters.

“It helps win the elections,” Lempart explains. “The sermons will say who to support.”

Tomasz says that young Poles are fed up with liberal politics that have led to persistent job loss. At its highest, the youth unemployment rate hovered around 42.5 percent in 2002, according to OECD, while center-left parties held the majority in parliament. Now it’s 20.8 percent.

Tomasz said the European Union is trying to impose what he believes are socialist policies, like refugee resettlements in Poland. He said that, after seeing terror attacks in France and Germany, Poland is smart not to follow in their footsteps.

Tomasz’s sentiments are echoed throughout the country. Similar grievances were heard in their most extreme form on Nov. 11, the day that marks Poland’s independence from the Russian Empire.

Several marches made their way through Warsaw, with the largest crowd drawing around 100,000 Poles decorated in red and white. “Long live a great, Catholic Poland” ricocheted off buildings as their celebrations romped through the city to the grounds of the National Stadium.

As the sun set over the Vistula River, families were replaced with thuds from Polish rap punctuated with expletives and flashes from red flares. Booming speeches by leaders of radical nationalist groups referred to immigrants as “murderers who are coming for your women and children.” These were met with droves of young men shouting, “Poland is for the Poles.”

Tomasz Dorosz, the 23-year-old deputy head of the National-Radical Camp, a far-right movement, complained that Poland was being bought by foreign nations. He said that Poles are humiliated by the exportation of jobs and, in turn, their own people. According to him and thousands of others who were chanting in unison, this is the fault of the left.

“They think they are an elite and an intelligence of this country … [who] have the right to govern and tell us Poles what we have to believe,” he shouted, seething in a buttoned-up coat and sculpted hair. “They are liars and rats!”

And although the Polish government is now controlled by a nationalist party, Dorosz doesn’t feel his portion of society is being fairly represented.

“Today, we once again showed [them] where the majority is, where the nation walks,” he continued. “Where the ordinary Pole walks, he who every day must work very hard in order to uphold himself in this country.”

Across town, in a fitting depiction of the rift between people in the country, the KOD held its second-most-attended rally. Speakers of left-leaning parties took the stage and spoke of a democratic Poland as part of the EU with chants such as, “freedom, equality and anti-fascism.”

After months of tumult, the European community has turned its attention to Poland. European Council President Donald Tusk, who recently said the fate of the European Union depends on Poland, commented on the recent unrest.

“I appeal to those who have real power for respect and consideration of the people, constitutional principles and morals,” he said to local media.

And although the democratic activist, Lempart, believes the fiery fortitude of the far-right will persist for years to come, she does believe it will eventually peter out. As she returns to her hometown after mobilizing all weekend in Warsaw, progressive Poles are preparing for a new string of protests across the country.

“[We’re going] to visit the PiS office with Christmas greetings,” she said.