The many faces of the ‘Latino vote’ 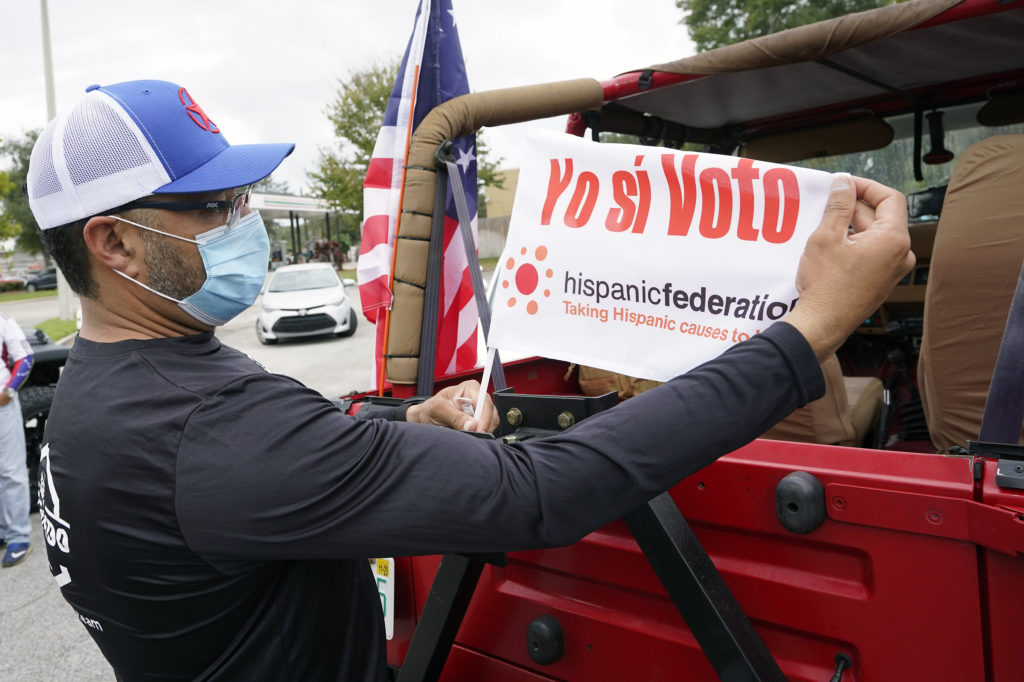 John Gimenez attaches a flag to his vehicle during an event hosted by the non-partisan organization Hispanic Federation to encourage Latinix voting in Kissimmee, Fla. (Photo by AP/John Raoux)

Members of the Latino community have long cautioned against characterizing them as one homogenous block. The election results in several states proved that what’s commonly called the “Latino vote” is anything but cohesive.

Immigrants’ many countries of origin, ongoing generational changes, the variety of issues that matter to different sub-groups and the outreach efforts by both Democrats and Republicans, among other factors, translated into a variety of outcomes in which Latino voters were crucial to both Trump and Biden’s state victories.

Our Report for America corps members have been covering these nuances for their local communities for months, chronicling the perspective of Latino voters of all ages and backgrounds before, during and after Election Day.

Latinos people represent about 40% of the population in Texas, and Democrats were counting with a higher turnout to flip the state blue, but in many districts including those along the border with Mexico, Trump was able to secure more votes than in 2016. For Texas Public Radio, María Mendez profiled a woman who exemplified that shift: Sylvia Cervantes, a 74-year-old woman who was a lifelong Democrat, until Donald Trump decided to run for president. Now, she sees herself as a Republican for the foreseeable future: “I think I am, (voting Republican again) unless we get a crazy Republican — I won’t vote. Trump is crazy, but he has done a lot of what he promised,” she said.

Florida was another state where the expectations of Latinos support were shattered by unexpectedly high support for Trump, particularly in Miami-Dade County. A lot of the support came from Venezualan and Cuban Americans, communities bombarded by disinformation campaigns in the run-up to the election that painted Joe Biden as a socialist along the lines of Fidel Castro, or Venezuelan president Nicolás Maduro.

Corps member Lautaro Grinspan wrote about these tactics – and how Democratic Socialists in the state were targeted by Trump supporters – for El Nuevo Herald while Yadira Lopez reported on the demonstrations by supporters of both candidates on Election Day, where the term “communist” was thrown around frequently in the direction of Biden supporters. A few days before the election Syra Ortiz-Blanes and Lautaro Grinspan analyzed the contradictory messaging of the Trump campaign of denying asylum claims from refugees from Cubans and Venezuelans at the same time he courted their votes.

But the diversity of Latinos is not just geographical. Age groups also seem to differ wildly in their political views. Reporting for The Sacramento Bee, Kim Bojórquez spotlights several Gen Z voters who were exercising their constitutional right for the first time. For many of them, issues like racial justice and immigration reform, rather than preference for a candidate, is the reason they became politically active, despite not having a voting tradition in their households.

“It’s more about voting people out of office,” said 18-year-old Marco Lopez about his and his family’s decision to vote this year. “It feels like it’s an obligation … if you don’t like something, you got to fix it. So we’re doing our part to help fix it.”

Young Latinos interviewed by Maria Esquinca for Radio Bilingue, echoed those sentiments, highlighting how the death of George Floyd and the economic crisis have turned people previously indifferent into voters and activists.

“Politics was always to me like a different world. It didn’t really matter to me,” said Sarah Martinez, a 26-year-old voter. “It didn’t matter until I saw my community, and my friends, and my family just being dangled in the air like little puppets… It became personal for me.”

Arizona emerged as one of the biggest stories in this election, seemingly tipping to the Democrats’ side. (At the time of writing this story, Biden had a three-point lead in the state with 86% of the vote tallied. The AP called the state for Biden, but other news organizations had not done so.)

A lot of the support for the Democratic candidate came from urban areas, helped by the rise of the Latino population in the state, which is expected to continue, projected to become 43% of the population by 2050, according to the Arizona Office of Economic Opportunity.  As demonstrated by the way Cuban and Venezualan Americans voted in Florida, however, Latino cannot be considered Democratic voters automatically. For KAWC, Andrea Pérez-Balderrama spoke with voters in Yuma county, Arizona, a traditionally Republican stronghold that now has a majority Latino population, to gauge their preferences. Many supported Trump: “”Under President Trump, we have been growing our economy, and that’s what our Latino communities need,” said Pastor Manuel Silvas. In the results published by the time of publication, Trump was winning in Yuma county by eight points, an increase of almost seven points from 2016, despite a higher turnout for Biden compared to Hillary Clinton.

Regardless of the winner in the presidential contest, the political influence of the Latino community continues to grow, particularly at the local level. Future campaigns will have to take into account age, gender, religion, ethnicity and other key factors to reach the different blocks within the Latino community.