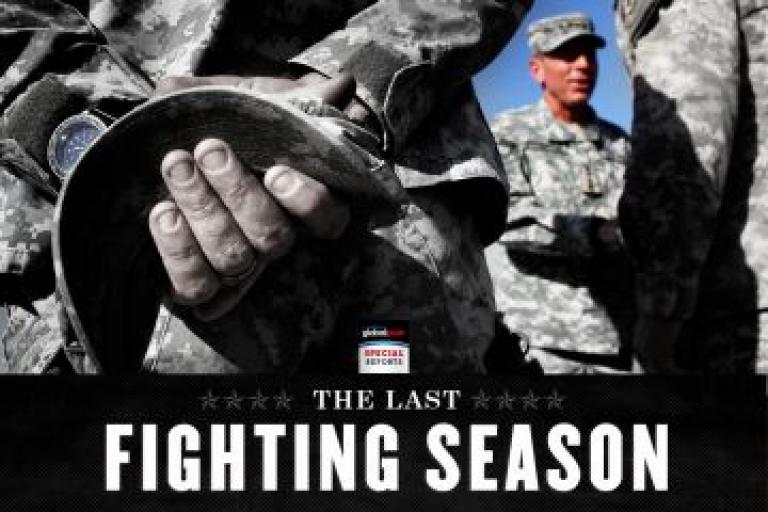 KABUL, Afghanistan — From Baghdad to Kabul and coming soon to Langley, Va., there’s a single image that Gen. David Petraeus keeps framed in his mind – and on his wall.

It’s a 1908 Frederic Remington oil painting titled “The Stampede.” A classic of the American West, it depicts a cowboy riding on rugged terrain, with an ominous storm overhead, trying to rustle up a herd of frightened cattle. Even the cowboy’s own horse is wild-eyed with fear at the hard rain and lightning bolts that streak across the horizon.

But the rider is fearless, focused, determined and looking straight ahead.

“The metaphor is about accepting chaos and staying focused amid all the uncertainty and the risk and the danger and the bad terrain. That’s what we need to do here,” said Petraeus, standing just outside the intelligence briefing room in the Kabul military headquarters where a copy of the painting is reverently framed like an icon of his command.

And now it looks like that painting will soon be hanging in the office of the director of the Central Intelligence Agency, where the White House has asked Petraeus to serve his country next. He will face confirmation hearings, but the overwhelming consensus is that Petraeus will sail through based on his credentials for the job.

In an interview at the headquarters of the International Security Assistance Force (ISAF), the U.S.-led coalition of 42 nations that is commanded by Petraeus, the four-star general offered GlobalPost a glimpse inside a turning point in the war, but also inside a more personal side of his life as a commanding general at the end of what is likely to be his “last fighting season.”

In a rare moment of kinship and candor with other military families, Petraeus also opened up about his own family’s experiences and the worry he felt having his own son, Stephen, serving under him in Afghanistan.

Petraeus declined to answer any questions about what’s next for him, and whether he might someday have aspirations for the White House, an idea that those close to him dismiss. Just a few weeks after the interview, the whispers were starting to surface that he was being actively considered as a candidate to lead the CIA.

But at this point in February, the general was just staring straight ahead and trying to lead the herd through the peril of the storm.

Entering the ISAF headquarters, you immediately feel the layers of history in the place. It’s originally a military garrison that dates to the British presence here and it was once used by the Soviet forces when they occupied Afghanistan. The Taliban operated from there as well when they controlled Kabul. Walk through the corridors past the long line of 42 national flags of the international forces, and you come to Petraeus’ office, where he seemed relaxed and well rested.

The last time I interviewed Petraeus was in Baghdad in 2008, and at that point he looked exhausted. You could see the bags under his eyes and you could literally hear the mortar fire landing in and around the Green Zone just outside his office. But Kabul was comparatively quiet. Petraeus says he sleeps well. He still daily runs a 5-mile course at a hard pace even in Kabul’s thin air at 6,000 feet above sea level. He expressed confidence about what can be accomplished in the spring fighting.

And from Baghdad to Kabul or from Fort Leavenworth, Kans., where he rewrote the field manual, to Tampa, Fla., where he headed U.S. Central Command, Petraeus offers proof of the efficacy of his plan through one beloved tool of communication: the PowerPoint presentation.

In a wide ranging interview and set of briefings with the full-on PowerPoint experience, I asked Petraeus what motivated him through his five wartime commands over the last eight years, a longevity for a wartime commander rivaled by only one other American general, George Washington.

“What keeps me going is what keeps all of our leaders and troopers going. Many of our men and women in uniform have been on multiple tours in Iraq and/or Afghanistan … What keeps everybody going is a recognition of the importance of this mission. In Afghanistan in particular, we only have to look at photos of ground zero and realize that this is a hugely important mission to our country,” Petraeus said.

Before he undertook this command in Kabul, Petraeus was securely ensconced at Central Command in Tampa. There, Petraeus was thinking strategically about the threat posed by Iran and about regional issues. He had in some ways lifted himself up and out of the all-consuming role of serving as a commander in a war zone to take on a higher and more strategic perch at Central Command.

But then everything changed and just like that rider in the painting he was back in the saddle and the chaos and danger of the storm.

Last summer, U.S. President Barack Obama asked him to take up command of the U.S. and ISAF forces in Afghanistan. The call came in the wake of the dramatic resignation of Gen. Stanley McChrystal after his military career self-destructed amid the toxic fallout from a June 2010 interview with Rolling Stone magazine in which he and his staff expressed criticism and sometimes disdain for the Obama administration’s approach to counterinsurgency.

Those close to Petraeus say that he immediately accepted the president’s orders. But they also recognize that he now faces an extraordinary set of challenges in Afghanistan — the most difficult task of his eight years in command. And the next six months will provide the turning point in the U.S. military campaign in Afghanistan, and the definitive moment of Petraeus’ career.

It will define his legacy.

One highly placed security official whom knows Petraeus well said, “He went back to Afghanistan because the president asked him to. He’s a soldier and he was given an order. That simple.” “General Petraeus came out of Iraq a hero for his success in the surge. … Are some of us worried that this command in Afghanistan could end without the success he hopes to achieve? Yes. And could that tarnish his legacy and his accomplishments? Well, history would determine that,” the source added.

By most accounts, Petraeus is likely to take the helm at the CIA. As one close adviser put it, “it’s a pretty damn good fit for all of his skills.”

While Petraeus was reticent about what’s next, he was uncharacteristically open about his family and most pointedly about his son, 2nd Lt. Stephen Petraeus, an infantry platoon leader for the 173 Airborne Brigade, whose recent combat tour in Afghanistan was kept very quiet and always considered out of bounds as a question for Petraeus.

This time Petraeus brought up the subject and opened a desk drawer and shared some photos of Stephen in the field just before his son’s deployment ended in November.

“He actually beat me here. He was here when I arrived. We had the first five months that I was here together,” said Petraeus, showing off the photos like any parent would.

“The only time I went and saw him in mid-November was to pin a combat infantryman’s badge on him before he left,” Petraeus said.

He said he’s proud of his son, but also aware that life in a military family has taken its toll on his wife and their son and daughter. He said when Stephen was in high school the family moved three times for different postings and that the only time he saw him in his senior year was at his graduation.

“Every family makes enormous sacrifices, long separations, the strain of knowing a loved one is in harms way,” Petraeus said.

“I think you have to try to get into a rhythm I guess, if you will, a routine that is sustainable,” he added.

“I am blessed to have a wonderful wife, who is an army daughter, an army wife and an army mother,” he said of his wife, Holly, a longtime advocate for military families.

Holly was recently been named by the Obama administration’s Elizabeth Warren to head up a new unit at the Consumer Protection Agency that seeks to shield military families from predatory lenders.

“She is very understated and has a very dry humor that particularly pokes fun at me,” Petraeus said.

He added, “I do think it is wonderful the way all American citizens have rallied around our men and women in uniform regardless of their views.”

Then Petraeus described a moment when he and his wife Holly were taking a taxi back to the airport in Boston after seeing Stephen’s graduation from the Massachusetts Institute of Technology. They went under an overpass and looked up to see a large banner hanging down. It read, “Hate the war. Love the troops.”