ON THE GROUND PHOTOGRAPHY

Rain, shine or COVID-19, this Wyoming fair must go on 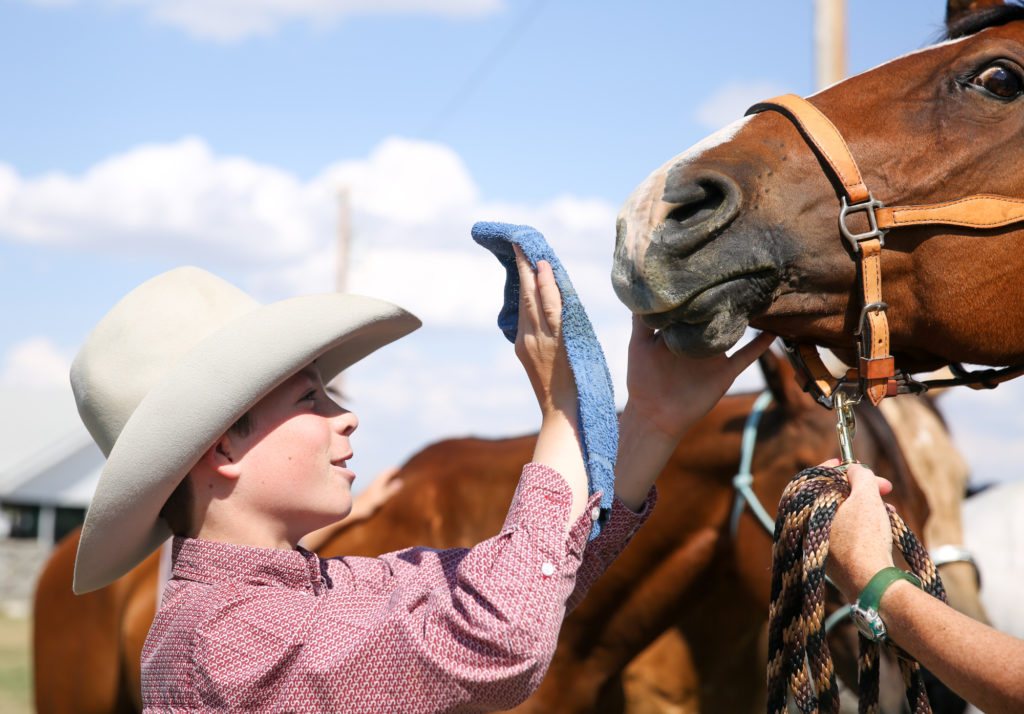 BUFFALO, Wyo. — Full from the buyer’s dinner and armed with bidder’s numbers, the crowd at the auction settled into the bleachers wrapped around the small sale pen.

Some wore masks and others cordoned themselves in the socially-distanced bidding area under a tent nearby. Still others made use of telephone bidding if they did not feel comfortable attending the staple event of the Johnson County Fair & Rodeo — the 75th annual livestock auction.

Livestock raisers with FFA (formerly Future Farmers of America) and 4-H work for up to 10 months to get their animals ready for the show. Grueling work, feeding, training, cleaning and practicing all lead to one of the final events of the 10-day fair. Sheep must walk without a halter; a steer’s hair must be trained to stand up; pigs must learn to hold their heads up while walking as directed by their owner. For many kids, spending time with their animals and fair projects was the one remaining thing they could occupy themselves with at home during the pandemic.

“We needed to get some kind of normalcy,” Frank Sickler, vice chairman of the livestock committee, said. “These kids work hard, not just at the fair. They have lots of time and money wrapped up in this.” 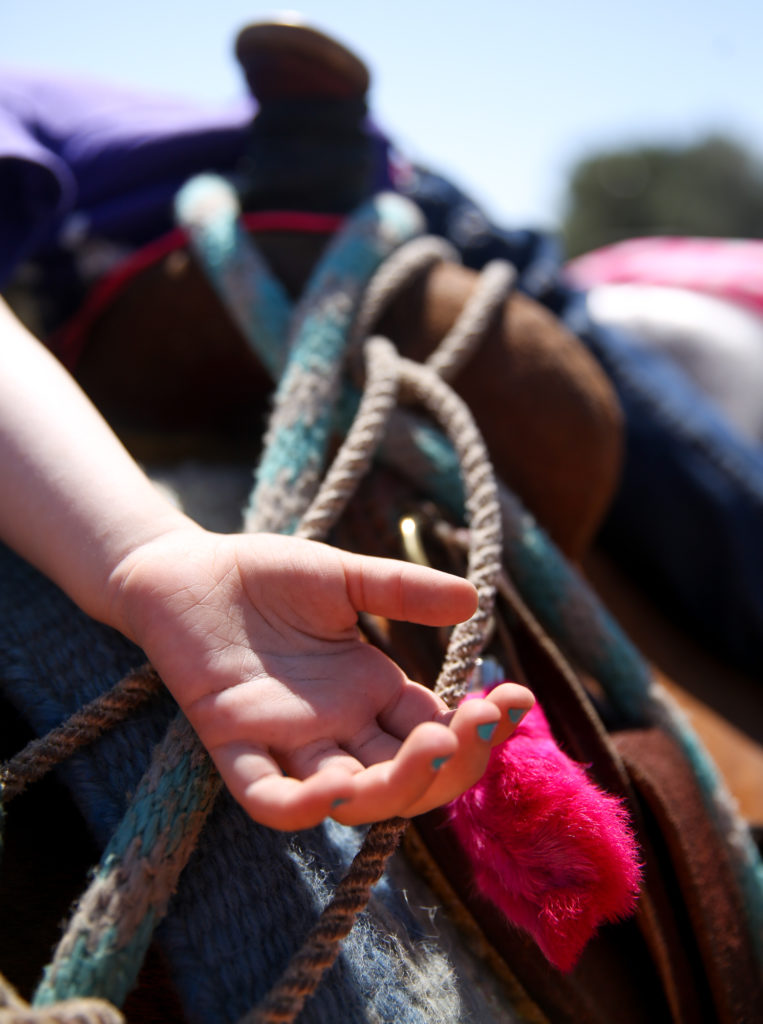 Larry Brannian kicked off the auction as he has for the last 40 years. As an “essential business,” livestock auctions are exempt from state health orders and gathering limits. Having no active COVID-19 cases locally also helped. So the auction was held just as in years past. Surrounded by social-distancing signs and hand sanitizer dispensers on posts in every livestock barn, Brannian kicked off another warm August night by welcoming Kaitlyn Painter, 15, and her black, 2020 grand champion market steer into the ring.

Shouts from bid callers echoed under the roof as bidders pushed the price higher. Within minutes, Painter and her steer were sent out of the ring with the final “Sold!” An agricultural dealership, Heartland Kubota, won the bidding with a pledged $4,600 for the animal. A total of 162 animals were to be sold in this single night.

The Johnson County Rodeo and Fair was first held in 1885 — before Wyoming even achieved statehood —  and has long been a staple source of entertainment and competition for Northern Wyoming. Canceled only when strained by conflicts like the Johnson County Cattle Wars (a notorious conflict between local cattlemen and sheep men in the late 1800s), concern about cancelation grew as COVID-19 spread throughout the country. It would be the first fair canceled since World War I.

In part because of its rural location and small population, Johnson County has maintained a low number of COVID cases, documenting only 18 total by the end of July. Only five cases developed after May and there were no active cases in the county in the weeks leading up to the fair. With extensive planning and a few strategic changes, the good fortune of being located in a rural area in the least populated state in the nation did the rest. The fair, the state’s oldest among its 23 counties, would go on.

“County fair is a staple,” said Bill McKenzie, chairman of the Youth Exhibitor Support Committee. “To be able to keep that going gives these kids hope.”

In the months leading up to the fair, the fair board and its committees worked to find the best options for keeping the event on schedule despite so much uncertainty, McKenzie said. Made up of leaders from the local rodeo and agricultural communities, these groups led the necessary changes while also trying to preserve traditions from years past.

It is a main event for locals to escape from the dry Wyoming summers and, for decades, the fair has been home to gathering friends, competitions and proudly displayed agricultural resources, an industry valued at an estimated $1.3 billion, according to a 2018 economic profile report by the Board of County Commissioners.

For some, a cancelation of the fair and the livestock sale specifically could have meant a major shift not only this year, but in the future; many kids use the money they make selling their animal in the fair to fund their projects the following year.

“The livestock sale is how they budget for the fair next year,” said Kellie Wassinger, a mother of three girls participating in the fair. “If we wouldn’t have had (the livestock sale), it probably would have ended their fair careers.”

According to Keefe Rice, chairman of the livestock committee, the livestock sale is one thing that underwent change. In a normal year, buyers would crowd around a small show pen to bid on sheep, pigs, cattle and other livestock as they are paraded in one-by-one by their young owners. Socially distant bidding options were advertised while the bleachers filled with community members eager to watch their show men and women move their livestock around the sale ring one last time.

The premium quality of animals combined with a desire to support local youth is what makes premium sale prices a reality according to Bryce McKenzie, the Johnson County Extension Youth Development Educator. And it is the prices that come at the fair livestock sale that makes this budgeting possible.

“They are the next generation coming into those industries and that’s why (buyers) do it,” McKenzie said. He knows that the buyers care about the hard work that kids put into raising these animals, and in turn, the quality of the animal that comes out of it.

“Even if they don’t go into the livestock industry, they are learning care and maintenance of an animal. They are learning time management and dedication and they are learning work ethic,” said Taylor Rieniets, the incoming FFA adviser at Buffalo High School. The youth organization focuses on teaching skills and knowledge in agricultural science, business and technology.

For Heston Crozier, a 12-year-old in the Krazy Kritters 4-H club, the best project is showing his heifer because of what he has learned along the way: “It teaches you how to take care of livestock, to keep them healthy and give them a good life.”

Long after dark and now before a quieter crowd, the last animals passed in and out of the ring. With tallies yet to be made, organizers and attendees held out hope that the animals sold on Saturday night would bring a price comparable to years past.

Jessi Dodge is the photojournalist for the Buffalo Bulletin, a weekly newspaper in Buffalo, Wyoming. This dispatch is part of a series called “On the Ground” with Report for America, an initiative of The GroundTruth Project. Follow her on Instagram: @jessidodgephotography.