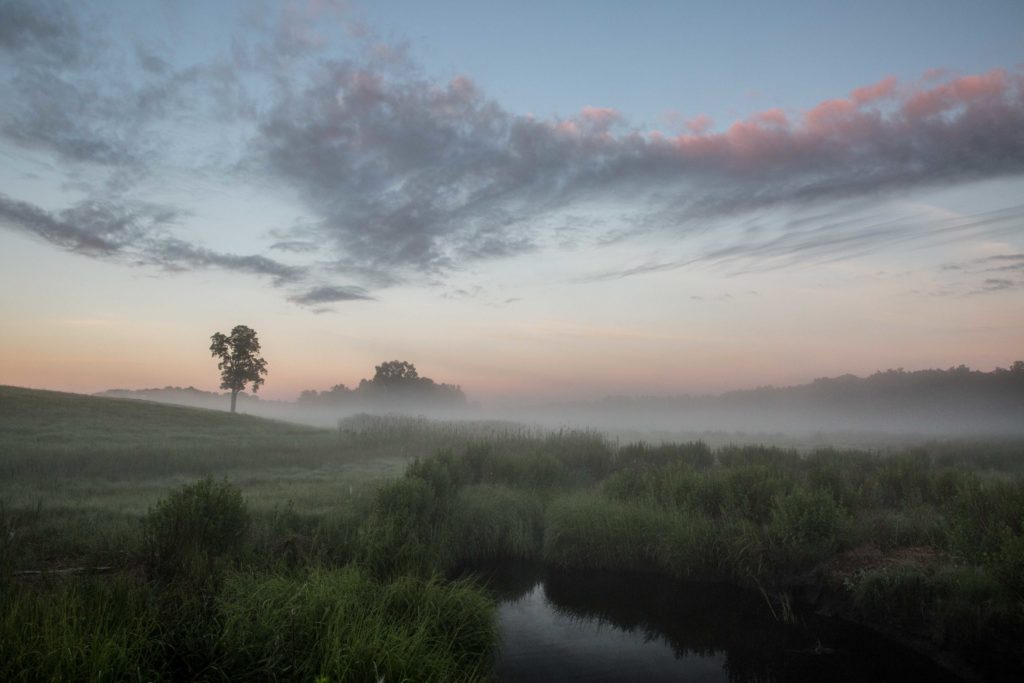 In a few minutes the sun will burn the dawn fog from this small section of the Great Marsh in Ipswich, Mass. At more than 20,000 acres, this ecosystem of uplands, barrier beaches, tidal creeks and mudflats serves a host of purposes from flood protection for homeowners to a nursery for fish and shellfish that the local seafood industry depends on. (Photo by Coco McCabe/GroundTruth)

For New England coastal dwellers who have toughed out countless nor’easters, the benchmark of bad was the blizzard of 1978 when a storm surge swamped shore communities with nearly four feet of water above the predicted high tide.

Back then—40 years ago—it was easy to dismiss that extreme event as an anomaly. Not any more. With climate change, anything is possible: Last January, a new record was set when storm waters rose even higher, sloshing into downtown Boston streets. Two months later, another storm surge, almost as high, inundated the streets again.

Where I live, next to the Great Marsh stretching for more than 20,000 acres from Cape Ann to the New Hampshire line, those two storms howled at us for attention. They demanded that we recognize the vulnerability of our own communities and that of more than 59 million people—their power plants and sewage treatment systems, their airports and low-lying roads—packed into coastline counties along the Atlantic Ocean and the Gulf of Mexico. Whether they know it or not, these communities depend on marshlands for flood protection.

It’s not just infrastructure that’s at stake. Marshes are the foundation of a food pyramid where all kinds of aquatic life gets its start: they are the nurseries for the commercial fisheries that feed us and that support a multi-million dollar seafood industry.

I think about climate change every day, and fear its consequences. When storms roar in, I can hear the waves pounding the beach as they suck sand from the protective dunes. Whipped with white caps, the tidal river beyond our kitchen window swells way beyond its banks, scouring the roots of towering oak trees until they topple.

In October, the UN’s Intergovernmental Panel on Climate Change issued a new report warning that if we continue producing greenhouse gas emissions at our current rate, by 2040 our atmosphere could warm by 2.7 degrees Fahrenheit above preindustrial levels. The effects could be disastrous—just 20 years from now.

The global politics of tackling climate change are daunting, particularly here in the US where our own president, a climate change skeptic, has announced we will withdraw from an international pact to curb emissions. The enormity of the problem makes me feel hopeless, until I think about the Great Marsh and all that it does both to support a vibrant way of life in the towns in its midst and to protect them from the ferocity of the Atlantic.

The largest contiguous stretch of saltmarsh in New England, this vast ecosystem of barrier beaches, tidal creeks, uplands and mudflats winds through seven Massachusetts communities where more than 85,000 people live. All of us rely on this mostly undisturbed wilderness to buffer storms, reduce coastal erosion, and minimize the effects of flooding. Many of us make our livings from the bounty the land and water provides through clamming, fishing, and tourism. And we’re not alone in that dependence: This is also vital habitat for migratory birds, including threatened species like the piping plover and the saltmarsh sparrow.

The Great Marsh is intact for now, but it’s increasingly under threat. Human activity along its fringes and, more ominously, sea-level rise, warming temperatures, and bigger and more frequent storm surges are all taking a toll. Ensuring the health of this gem, where teams of scientists are exploring how to safeguard its vitality, starts with public awareness. And that’s what this photo essay aims to do: it’s a paean to coastal mud and grass—and all the life they breed and protect—everywhere.

“Be here now,” says my husband, with some frustration, when he sees me, yet again, disappear behind the lens of my camera. The thing that I have a hard time explaining to him is that I am here:  Through that tiny viewfinder on the back, a whole world is waiting to be examined, closely, from every possible angle. I can’t resist it.

I’m late to this practice—decades late, alas—but not ill-prepared for it: For most of my life I have been a writer and editor, and have traveled extensively to some of the most difficult and often remote places on our planet. For me, photography is very much a physical enterprise. It gets me out of bed long before dawn so I can be where I need to be to catch the morning light. It carries me through the rain and fog, mud and snow, delighting in the elements even as my toes and fingers ache with cold. I am here now.  I love to be.

And that’s why I’m exploring the Great Marsh, a vast and wonderful wilderness that passes right by my door.  In the face of climate change, I am deeply worried about the fate of these 20,000-plus acres—and the fate of all of us around the country who depend on salt marshes like it to feed us, to protect us from storms, to give us a wide-open sky and endless space to romp. I want others to feel the same urgency I feel about this vital resource, its uplands and beaches, creeks and mudflats.  Even if they never have to swat at a marsh mosquito or scrape mud off the bottom of their shoes, I want people to get a feel for the place, and to marvel at it all.

For me, the picture of the osprey chick, with its wings spread and orange eyes boring into the camera, sums all of this up. I went at dawn one morning with Dave Rimmer, from the Essex County Greenbelt Association, on a mission to band some of the chicks before they were big enough to fly off.  He’s working to help restore the osprey population, and banding helps him and others keep track of the birds. We went at high tide so there would be enough water in the channels to run the boat up onto the grasses near each towering nest, giving Rimmer a few minutes to jump out with a ladder, retrieve the chicks, band them, and return them to their aeries.

I know I shouldn’t anthropomorphize, but I feel there’s a warning in that chick’s glare, a call to action. A lot of people I met with for this photo series are heeding that call. They’re studying the marsh, working to rid it of invasive species, trying to restore what’s been lost. Others might not be activists—not yet—but the Great Marsh speaks to them, nevertheless: they swim in its waters, fish its channels, dig in its mud for clams. And when big storms whip in from the Atlantic, the marsh is there, thankfully, to soften the blow for everyone nearby.