The Fishers Who Cut Their Nets To Set Whale Sharks Free 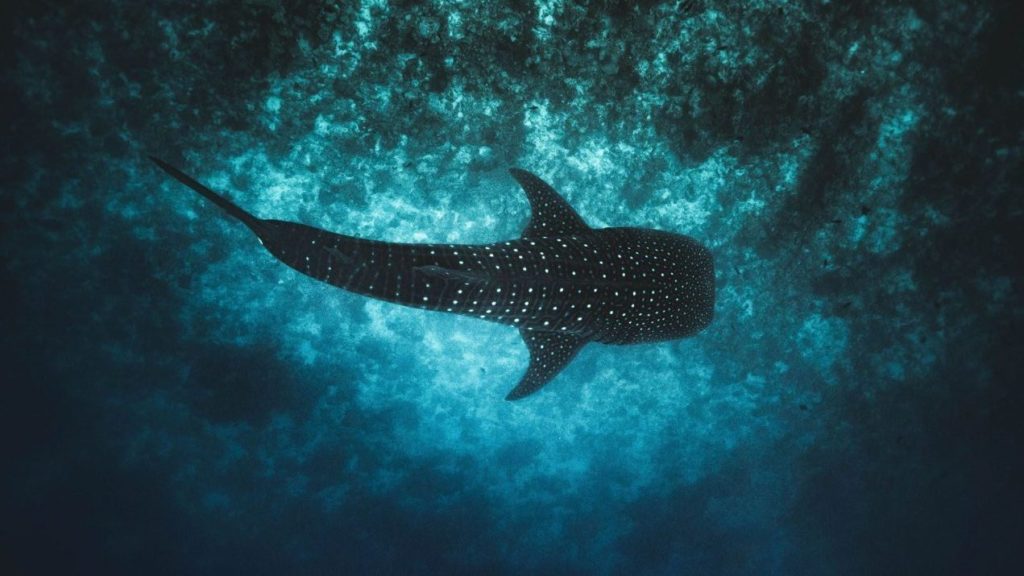 Whale sharks, the world’s largest fish, used to be a targeted fishery in Gujarat until the mid 2000s, and never since. (Photo by: WTI)

Kochi: “Happiness,” recalled 56-year-old Veljibhai Kanjibhai Masani, a Gujarati fisherman. “Happiness was what I felt then. I felt the same emotions I do when my sister or daughter come home.”

Masani was looking back to the first time he cut open his net to set free a whale shark that had become entangled in it, 18 years ago.

Whale sharks (Rhincodon typus) are fish. And they’re the world’s largest fish, growing up to 40 feet long. The waters off India’s coasts are home to whale sharks that migrate to these waters every winter. They aggregate in large numbers off Veraval, a port in Gujarat.

They are also endangered. Masani’s fishing community used to hunt them until almost two decades ago for their meat and oil.

Today, even if whale sharks become accidentally entangled in their fishing nets, fishers cut the nets loose, just like Masani did. They set the whale sharks free.

This remarkable U-turn in perspective among Gujarat’s fisherfolk is rooted in the government’s decision to ban the hunting and trade of whale sharks in 2000. The clincher, however, was a carefully designed conservation programme implemented in 2004 by the Wildlife Trust of India (WTI), a conservation and research nonprofit.

The project took stakeholders, including fisherfolk, into confidence and joined coordinated efforts by the state fisheries and forest departments. Over 18 years, the programme helped save 857 whale sharks from certain death along Gujarat’s coasts alone.

Inspired by their success, the WTI team, together with state fisheries and forest departments, is set to extend the project to three more territories on the west coast: Kerala, Karnataka and Lakshadweep.

WTI said it will focus only on the west coast for now; there are no immediate plans for taking its programme to the east coast.

Marine biologists agree that it’s a good idea to expand conservation efforts beyond Gujarat. However, what of the other, more threatened but less charismatic species in these waters that haven’t received a similar level and quality of attention so far?

To fisherfolk, a fish that is 40 feet long and weighs 8-10 tonnes portends windfall. Gujarati’s fishers targeted the fish for its liver (to extract oil), skin and cartilage. Most of its body parts were put to use. A single whale shark was worth anywhere between 2 and 3 lakh rupees, according to Masani.

Fishing whale sharks became so lucrative that, by the mid-1980s, they had become a “regular fishery” along this coast, according to one estimate. In 1998 alone, fishers here harvested around a thousand whale sharks. This resulted in an “alarming situation”, wrote P. Pravin, a scientist with the Central Institute of Fisheries Technology, Kerala, in 2000. According to him, the fishing placed whale sharks, which are slow breeders, “under severe threat”.

The same year, filmmaker Mike Pandey’s documentary Shores of Silence: Whale Sharks in India, shot over many years, won the prestigious Wildscreen Panda Award, better known as the ‘Green Oscar’. It highlighted the commercial fishing of whale sharks and the species’ plight along the coast of Gujarat.

The Indian government responded in 2001 by listing the species in Schedule I of the Wildlife Protection Act 1972. Thus, it became the first fish species to obtain legal protection. It was now illegal to hunt or trade whale sharks.

But the law didn’t stop the hunting. Many fishers were simply unaware of the change in legal status. So in 2004, the WTI launched its “Save the Whale Sharks” campaign, in collaboration with the International Fund for Animal Welfare, Tata Chemicals Ltd. and the Gujarat forest department. They turned to a local religious leader, Morari Bapu, for help.

The godman, popular among the local fishing community, came up with a comparison that hit close home: he likened the whale sharks to daughters who come back to their parents’ homes to give birth – reminiscent of the theory that migratory whale sharks come to Indian waters to breed.

Masani still remembers Morari Bapu’s words: “They are like our daughters.” Fishers across Gujarat’s Saurashtra coast followed his words. They were ready to cut their valuable fishing nets and incur losses if they could set their ‘daughters’ free.

At first, fishers didn’t know how best to secure the large fish’s release. WTI researchers conducted training programmes about the best ways to minimise stress or injury to the fish. They also conducted awareness campaigns about whale sharks in several coastal villages.

In 2019, WTI developed the ‘Vhali Watcher’ mobile app (vhali in Gujarati means “beloved one”) to improve the self-documentation system the fishers already used to record their whale-shark releases.

The forest department today also compensates fishers for their nets, but they’re not sufficient. They amount to just between 15,000 and 20,000 rupees – barely a third the price of a large fishing net, which can cost Rs 50,000 to Rs 1 lakh), Masani said.

The loss of a net also means a fisher can’t set out to sea for a week, which is the time it takes to repair or replace it. “But it cannot be seen as a business.”

Nonetheless, the fishers’ change in perspective has meant the hunting of whale sharks in Gujarat has virtually ceased. The sole fatal threat to whale sharks in Gujarat’s coasts today is collision with vessels, marine biologist Charan Kumar Paidi, assistant manager of WTI’s ‘Save the Whale Sharks’ campaign, said.

Over the years, WTI teams have also generated ecological data on whale sharks. One group radio-tagged eight whale sharks between 2011 and 2017. Their results, published in July 2021, suggest Gujarat’s coasts don’t have a resident whale shark population. All the whale sharks here were migratory, moving across the eastern Arabian sea, including the northern waters off Lakshadweep.

So protecting them along the Gujarat coast alone didn’t make sense, Paidi said.

In addition whale sharks die along the coasts of many other states. In January this year, fishers in Kanyakumari in Tamil Nadu accidentally snagged a whale shark in their net. Instead of releasing it back into the sea, however, they pulled it to the shore and auctioned its corpse off for Rs 1 lakh.

Whale sharks on the west coast

The researchers and the respective state fisheries and forest departments are now expanding the programme to Kerala, Karnataka and Lakshadweep, which have coasts on India’s west side.

The programme, funded by IT company Oracle, will be officially launched in Karnataka today – on International Whale Shark Day. The Kerala and Lakshadweep launches will follow in October. The team again plans to rope religious leaders in for greater public reach, but it will also look to bring on board other popular public figures, such as film stars and popular YouTubers.

“It’s a good idea to expand the project beyond Gujarat,” marine biologist Divya Karnad, who is not associated with the project, said. “I think the whale shark is a good species to start with because it’s quite well-known.”

Karnad, an assistant professor of environmental studies at Ashoka University, Sonepat, reported in 2020 that most fishers in Gujarat and Maharashtra who weren’t aware of the protected status of several other elasmobranchs – cartilaginous fish – knew that whale sharks and sawfish were protected. “So that’s a good base to build on,” she said.

There has also been a trend of fishers releasing species and being rewarded when their videos go viral on the social media, she added. These rewards come from research organisations like Kerala’s Central Marine Fisheries Research Institute.

At the same time, there are several other marine species such as sawfish that are even more threatened than the whale shark and are in urgent need of similar conservation action, Karnad, said.

The sawfish are named for their long, saw-like snouts, which also makes their extrication from nets more difficult without threatening their lives. But a combination of methods – protecting estuaries, especially the riverine portions where sawfish are usually found, changing the types and location of fishing nets used, and educating fishermen on safe release – can improve their chances, Karnad said.

Gujarat’s fishers are also happy that the programme is being extended to other states. Masani, now a member of the National Fisheries Development Board and national president of the Akhil Bharatiya Fishermen Association, said he feels more motivated now.

“We have to extend to the whale shark all the love we give to our sisters and daughters,” he said, “when they come home to us.”