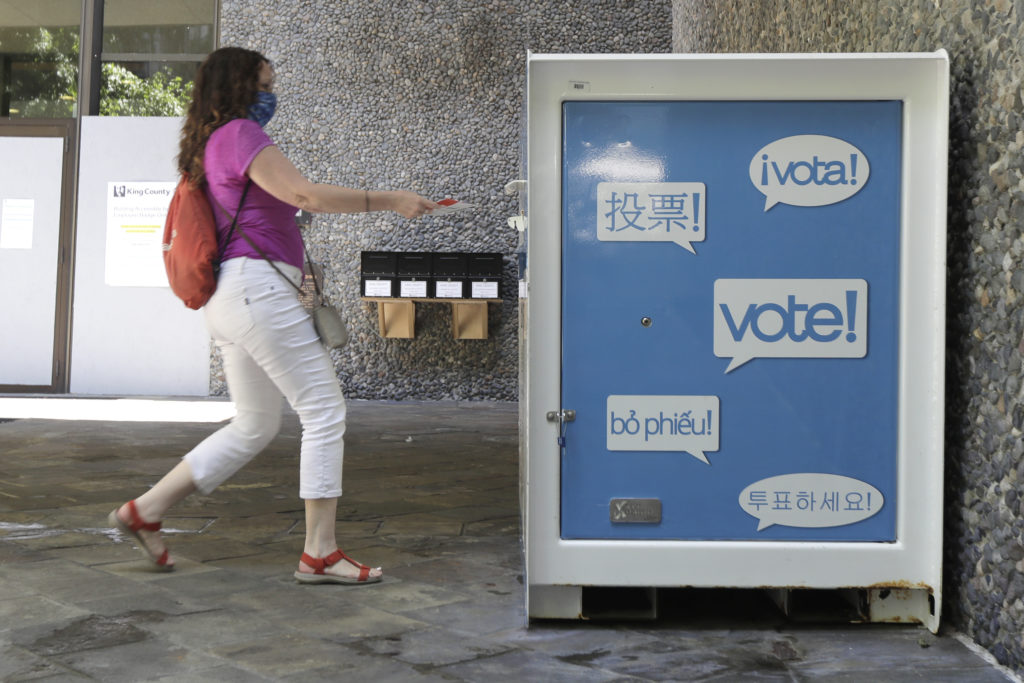 In this Aug. 4, 2020 photo, a person drops off a ballot for Washington state's primary election at a collection box at the King County Administration Building in Seattle. With the Trump administration openly trying to undermine mail-in voting this fall, some election officials around the country are hoping to bypass the Postal Service by installing lots of ballot drop boxes in libraries, community centers and other public places. (Photo by Ted S. Warren, File/AP Photo)

This story by the Fulcrum is part of the SoJo Exchange from the Solutions Journalism Network, a nonprofit organization dedicated to rigorous reporting about responses to social problems.

There is no silver bullet that will save this pandemic-plagued election. When the president calls on his supporters to commit a felony by voting twice, and on the same day his attorney general fabricates a fake election fraud indictment, it’s clear the climax of 2020 will be like no presidential race before.

But there’s one solution that is so affordable, practical and achievable that it deserves special notice: ballot drop boxes.

For voters too afraid of the coronavirus to turn up at the polls, and worried the Postal Service will be too overwhelmed to deliver ballots on time, drop boxes — secure, locked structures that can be temporary or permanent — offer a relatively simple and confidence-boosting fix. Drop boxes are increasingly popular, may be installed at the discretion of local election officials, and will be used more widely than ever this year.

Of course, it’s not that simple. President Trump has called drop boxes a “voter security disaster,” and Republicans’ post-election legal strategy reportedly includes challenging mail ballots that lack postmarks. In Pennsylvania, where election officials expanded the use of drop boxes for the primary, Trump and the Republican National Committee sued to block them, citing fraud concerns. In Ohio, GOP Secretary of State Frank LaRose limited drop boxes to one per county, prompting state Democrats to sue.

But drop boxes could be hard to stop. A federal judge in Pennsylvania put the Trump-RNC suit on hold pending state court action, after Republicans failed to substantiate their claims of fraud. While only eight states explicitly permit or require drop boxes for voting, at least 35 plan to use them this fall. And where state laws are silent on drop box use, local officials have the discretion and authority to implement them, say advocates of absentee voting.

“This election season is one in which options matter, and where voters need as many reasonable, safe and secure avenues as possible to register their voices and their votes,” says Kristen Clark, president and executive director of the Lawyers’ Committee for Civil Rights Under Law, which has defended states’ use and expansion of drop boxes in court.

Related: GroundTruth’s Special Reporting on Voting Rights ahead of the Presidential Election

Drop boxes could alleviate so many of the chronic ills that plague elections — from long lines to equipment breakdowns to poll worker shortages — that it’s a wonder they’re not more widely used already. Says Myrna Pérez, director of voting rights and elections at the Brennan Center for Justice, which is advocating for easier voting: “It is such a common-sensical solution to some really challenging problems.”

Even before the pandemic, drop box voting was going up. In Washington — one of the five states that were proactively sending ballots and return envelopes to all voters even before the pandemic — 57 percent of the ballots were returned to a drop box in the last presidential election, up from 38 percent in 2012, according to a report last month by the Stanford-MIT Healthy Elections Project. Three-quarters of Colorado voters (another of the all-remote-vote states) returned their ballots using drop boxes four years ago, that same report found.

Drop boxes are embraced by many GOP election officials and have been endorsed by the Election Assistance Commission, the federal agency that offers mostly nonbinding guidance to states for balloting best practices. It recommends one drop box be created for every 15,000 to 20,000 registered voters.

Now, because of the coronavirus and intensifying postal delivery fears, election officials are poised to deploy drop boxes in record numbers. Connecticut (with 200 new drop boxes), Georgia (144), Maryland (270) and Michigan (more than 750) are just a few of the states that have dramatically expanded their use for the presidential election.

Some types of drop boxes require more funding and advance planning to install. The permanent, outdoor variety can cost $6,000, weigh up 600 pounds, and is typically made of steel, bolted to the ground and outfitted with a security camera. But temporary drop boxes may also be installed outdoors or indoors, and staffed at drive-through locations at peak times, or overseen by poll workers on Election Day.

In the capital of battleground Wisconsin, a Madison clerk capitalized on the security and convenience of book drops at libraries closed down because of Covid-19 to turn them into temporary ballot drop boxes for the primary. Election officials should also consider taking advantage of boxes set up for taxes and public utilities, and partner with institutions practiced at social distancing, such as grocery stores and banks, the EAC recommends.

A handful of states, including Tennessee, have blocked drop box use in the coming election, citing security concerns. But states that have used drop boxes extensively do not report problems with fraud, ballot theft or tampering. And some argue that drop boxes should be placed at each polling place throughout the country — during early voting and on Election Day.

This election faces multiple threats, from the danger that Trump will foment a crisis of confidence to poll worker shortages, health hazards, funding shortfalls and mail delivery delays. But a saving grace, some have suggested, may be the decentralized nature of our election system. Election officials enjoy considerable independence and local latitude. Ballot drop boxes are not a panacea, but their simplicity and practicality have made them a potential fix that more and more election administrators have decided not to overlook.