The do’s and don’ts of religion reporting 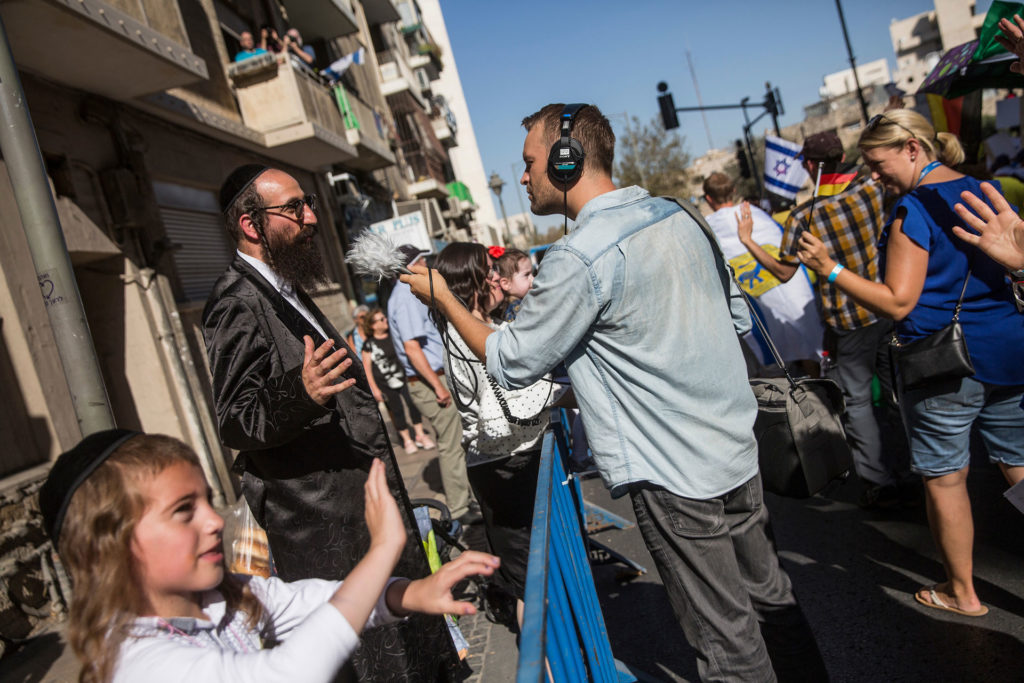 GroundTruth fellow Micah Danney on assignment in Jerusalem as he interviews a religious Jewish Israeli during a parade on September 27,2018 (Photo by Heidi Levine/GroundTruth)

Just 25 years ago, most publications had an established religion beat reporter covering expressions of faith across communities and their intersection with world affairs. But the woes of the industry have made that position a luxury that only very few outlets can afford. At the same time, religion has gained prominence in beats like national security, race and politics, exposing reporters covering those topics to sources, themes and situations they are not usually familiar with.

For this edition of Navigator, I spoke with Diane Winston, Knight Chair in Media and Religion at the Annenberg School for Communication at the University of Southern California about how reporters can approach religious topics, even if religion is not their beat. “Religion is at the heart of so many stories. It’s at the center of politics, whether we look domestically or internationally, it’s part of family, it’s deeply in stories about race, in social justice, in economics. There’s no part of human life where religion, broadly speaking is not entangled,” she says. Instilling in the next generation of reporters this sense of interconnectivity is paramount to Winston as a professor and journalist. Her answers were edited for length and clarity.

You wouldn’t go into an interview with the President of the United States and call him “Mr. Prime Minister,” right? Or refer to a biologist as a bacteriologist. Yet, Winston has noticed how religious literacy has been declining among young reporters, and this can  lead them to make embarrassing mistakes when interacting with religious leaders or practitioners, such as addressing an Episcopal priest as “minister” or a protestant reverend as “pastor.”

“These things, which may seem small if you’re not interested or involved in religion, are a big deal to people who themselves are religious and who you’re covering,” says Winston. A politician or a scientist might forgive you for not getting their title right, even if they might be annoyed, but it is more likely that a religious person would take offense to not being addressed properly because of how closely some people identify themselves with their faith.

Such a mistake could easily ruin the chance to build a rapport with your subject, because it suggests you don’t care enough about their faith to learn about it.

Winston recommends reviewing the AP Stylebook for the correct way to refer to an specific religious congregation before speaking with anyone from that faith.

Forget all you think you know about other people’s beliefs.

Religion has become so intertwined with politics that anything associated with it tends to fall into a narrative that reinforces stereotypes. An analysis conducted by the Pew Research Center around the 2012 presidential campaign, found that Republican candidate Mitt Romney received twice as much religion coverage as Barack Obama, mostly focused on how his religion would impact voters, while Obama’s coverage focused on instances where his Christianity was challenged. Only 16 percent of the coverage of both candidates focused on how religion would impact policymaking or governance, according to the study.

After the election, 65 percent of U.S. adults who participated in Pew’s poll said they were aware that Romney is a Mormon, but 82 percent said they had learned “not very much” or “nothing at all” about the Mormon religion.

According to Winston, generalizations like, “all Christians are conservative” and “All American Jews support Israel” permeate stories and condition the perspective of reporters. “Often times, reporters assume religious people are either stupid, benighted or superstitious,” says Winston.  “They go into interviews with an attitude of ‘I don’t have much to learn from you, you’re not going to say anything that is going to surprise me or this person is just going to rehearse political lines.’”

“I wish the next generation of reporters can honestly think through their subjectivity, so they can be more upfront with how their quiet, innate little prejudices influence their reporting,” says Winston. One way of doing that, she suggests, is to interact with religious groups in more neutral settings. This semester, for example, she taught a course where her students worked together with a journalism class from an evangelical university, meeting regularly to work and discuss stories.  “At the end of the semester most of my students said, ‘I hadn’t realize how prejudice I was against evangelicals,’” recalls Winston.

You can also embrace your questions about religion to connect with your sources. GroundTruth reporting fellow Micah Danney spent five months inside a Christian Zionist community in Jerusalem for our three-part podcast series “The End of Days.” He overcame their initial doubts by admitting he was skeptical about organized religion: “Because I grew up questioning the faith that I was born into, and because I still have a lot of these questions, they wanted to help me, they wanted to explain it to me, they wanted to kind of to bring me into the light. It ended up being pretty helpful.”

Resist the allure of extreme views

Religious groups are not monolithic. Even in centralized faiths like Catholicism, there are multiple perspectives and interpretations among its leaders and practitioners. However, Winston rarely sees that variety represented in journalism: “Most of the time reporters look for the people who have the most extreme opinion because they will get the best sound bites from them,” she says. “So for example, every time something bad happens people will go to someone like Pat Robertson, and he would say something like: ‘This happened because God was angry.’ That makes a nice sound bite, but it really isn’t representative of how most persons feel about it,” she says.

Winston recommends that reporters research in advance the religious communities in your beat to know where they stand in the spectrum and identify which people you should talk to. This usually leads to better stories, she says.

For example, this spring she and our executive editor, Kevin Grant, led a group of students on a trip to India to report on the convergence of religion and nationalism for our series “The Modi Effect.” Instead of visiting the traditional centers of power and faith, like New Dehli, they focused their reporting on Kerala, the most religiously diverse state in the country. Their pre-reporting research pointed them to people who representative of the complex dynamics of the country: a fiction author and devout Hindu speaking against Hindu nationalism; communist candidates advocating for religious freedom; and sympathizers across the political spectrum, among others. This resulted in more varied and deep stories than if they had gone to a nationalist stronghold.

Report on new religions from a different perspective

It’s easy to fall into the trap of being dismissive of a new religion when reporting on them. Winston argues this happens because we these new faiths don’t have the benefit of the doubt that time has granted to other religions.

Imagine someone telling you that they believe in a man that not only rose from the dead, but also resurrected others while preaching to love your enemies and share your possessions with the poor. It’s probable that you would be skeptical and even suspicious about this belief. And yet, that’s one of the central tenets of Christian faith. “Because Jesus lived 2000 years ago, it takes on a sense of possibility that would not be there if it had happened yesterday,” says Winston.

Also, new religions, like Christianity in its early days, are revolutionary, which raises suspicions among those looking from the outside. “Because they often seem contrary to mainstream beliefs, whether it is giving away all your money, sharing sexual partners, or believing in spacemen, other people assume that people that join this new religions are misguided or brainwashed,” says Winston. This gets reflected in the news coverage, which is why Winston cautions young journalists against using the word “cult” to refer to these groups, because of the negative connotations associated with it.