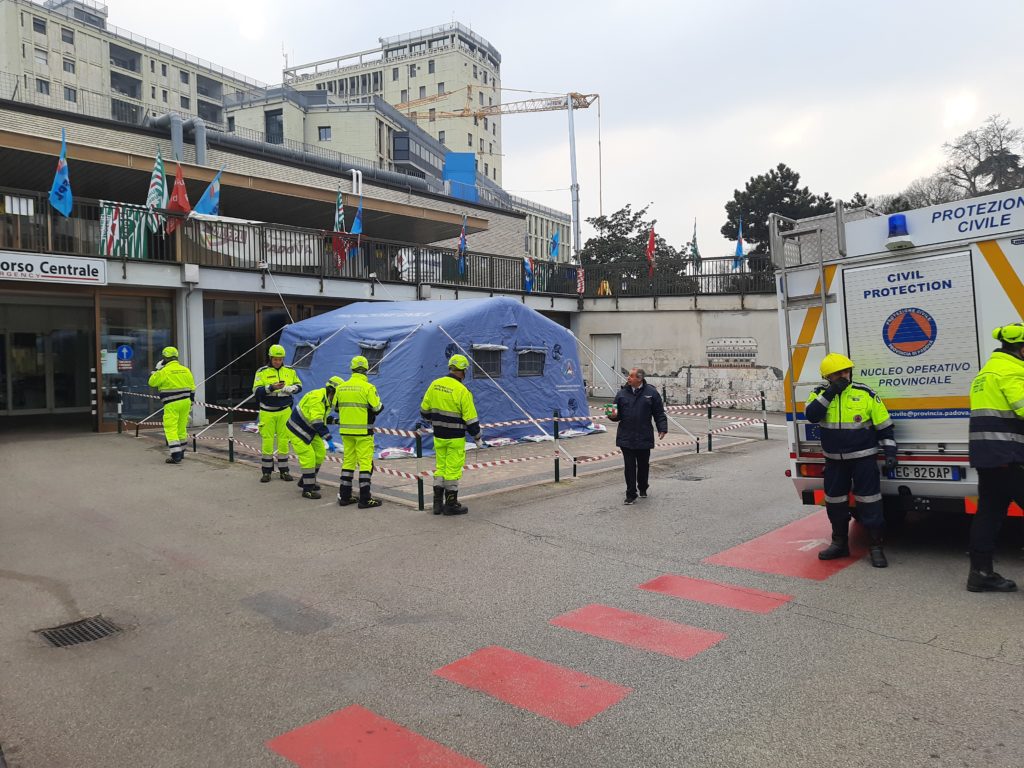 Volunteers with Italy's Civil Protection Department install a tent in the emergency room of the hospital at the University of Padua to face the local COVID-19 epidemic on February 24, 2020. (Photo by Amarvudol/WikiCommons)

MILAN – The main gate of the hospital where my father works is usually crowded with patients’ relatives. Now, there was just one man sitting on the stone sidewalk, playing with his mobile phone. I was there to pick up medical supplies — gloves, an oximeter — for my mother and brother, who were quarantined in Rozzano, on the outskirts of Milan.

“How’s your father feeling?” asked one of the doctors checking me in. She was surprised when I told her he had contracted the virus.

My father has been a geriatrician at one of Milan’s main hospitals for more than 30 years,  and at the outbreak of the COVID-19 crisis, he was working, as usual. And yet, in the midst of a pandemic, no one had notified his coworkers that he had been infected, or that they too might’ve been exposed.

It’s impossible to know exactly when he contracted the virus; it could have been at home, or on the street, or it could have been at work, while treating his patients. In early March he was instructed to quickly find a dozen beds for incoming patients, to comply with a regional decree that mandated an increase of the number of available beds in an attempt to stem the onslaught in many hospitals and care centers for elderly patients in Lombardy. He was worried because he didn’t know whether the patients tested positive for coronavirus before their arrival. At that time there weren’t strict new-patient procedures to follow. He treated them.

His story is representative of medical professionals across Lombardy, overwhelmed by patients, hindered by an absence of clear procedures and lacking the personal protective equipment to do their work safely. The region’s hospitals have become hosts to what the Italian media calls “accidental outbreaks,” explosions of the virus as the original surge in cases is being contained. Employees have reported these conditions for weeks and now threaten to sue if hospital administrators don’t provide them with the crucial elements they need to do their job. Giuseppe Calicchio, the health director of Pio Albergo Trivulzio, has been indicted and investigations into the mismanagement of hospitals amid the crisis are underway in Bergamo and Como.

According to a visible data pattern in Lombardy, the region where we live, home to the capital of Milan and roughly 40% of the nation’s 10,000 infected healthcare workers, it is possible – even probable – that my father was infected on the “front lines” of this battle.

And as this crisis worsens in the north of the country, where hospitals are better funded and have more capacity, doctors and public health experts worry about the number of cases skyrocketing in the south, where infrastructure has lagged for decades and a staggering split in the efficiency of the healthcare system is evident, according to national indexes.

“This disease is anguish for both doctors and relatives,” said Carmelo Iacobello, an  infectologist at Cannizzaro hospital in Catania, the second largest city in Sicily. “Doctors are unarmed and without a treatment to follow.”

Around the time my father was instructed to find more beds, the Italian media began reporting on the conditions in hospitals in Lombardy. Citing health workers who requested anonymity for fear of retribution, the local media denounced the conditions that doctors and nurses were working under – without protective gear – and confirmed that hospitals did not have enough tests for symptomatic patients and employees.

My father started to feel weak on March 19, and when he got sick his hospital had yet to implement any single procedure to handle COVID-19 patients. Management had even gone so far as to tell employees not to wear surgical masks to avoid scaring patients and their relatives, a widespread practice across regional hospitals that nurses and doctors have since denounced.

He worried about possible contagion in the days before, so had already distanced himself from my mother and brother, sleeping in a different room. That night, he barely slept, and the next day he went to the nearest emergency room to get tested. He was immediately hospitalized, but because the doctors concluded his symptoms weren’t too acute, he was dismissed, only to return to the hospital 10 days later after his pneumonia continued to worsen.

On March 27, the Lombardy chapters of FP Cgil and FP Cisl, two of the three main public employee unions, presented a formal complaint against the Pio Albergo Trivulzio hospital. The complaint, based on reports from employees, alleges that the security procedures to avoid contagion among employees were insufficient: surfaces weren’t disinfected often enough, the hospital lacked masks, gloves and other protection equipment; staff rotations didn’t take risk of contagion into account. The document warns that if management doesn’t address these issues, the unions will initiate a lawsuit. Similar letters have been sent to other hospitals and senior centers in the region, and unions have also threatened to take legal action against those in charge of the regional healthcare system and the Health Ministry.

In early March, the regional government of Lombardy received a shipment of four million masks that were useless. According to local media, the masks didn’t have elastic bands for attaching to the face, relying instead on holes in the sides that fit around the ears and creating gaps that make them unusable for doctors and even for civilians. Doctors and nurses refused to wear them. “We needed Fpp2 or Fpp3 masks, you sent us tissues, toilet paper instead,” said Giulio Gallera, the top health official in Lombardy, referring to the quality of the masks at a press conference.

The episode highlights the shortcomings of the Italian medical system: Lombardy didn’t have a plan in place for a health emergency, including a protocol for restocking the system’s supply during a crisis. When the regional authorities realized they needed masks, they contacted the Civil Protection Department, the government organization in charge of managing emergency response, requesting they place the order. According to media reports, the Lombardy government didn’t vet the suppliers and neither did the Civil Protection Department. At no point did anyone question the quality of the masks.

Meanwhile, health workers were improvising their own safety measures. In the weeks before he fell ill, he would go back home at night and dunk his surgical mask in a bowl of rubbing alcohol.

So far, the COVID-19 outbreak has hit northern Italy much harder than the south; as of April 6, the north documented 128,764 cases of COVID-19 out of the total of 162,448 cases in the country, but places like Sicily are running against the clock to prepare for an outbreak of the virus. On March 12, Sicilian governor Nello Musumeci announced they will have an additional 1,000 beds specially designated for COVID-19 patients, but it is unlikely to be enough.

While healthcare is free in Italy, government divestment in recent years has created gaps in management and care. In the last decade, the expenditure for national public healthcare only creeped up €8.8 billion, or 0.9%, an average annual increase not attributed to new investment but inflation, a crisis affecting the varied sectors of the Italian economy.

Italy also suffers from a disparity in coverage and quality of care between the north and south. Despite all their missteps in the current crisis, northern Italy’s healthcare system is regarded within the country as better equipped than the south’s, a regional difference manifesting in nearly every sector, from education to employment and public spending. According to an annual report on the inequality between the two regions, in 2019 there were 791 beds for every 100,000 residents in central-northern Italy compared to just 363 for the same number in southern Italy.

The disparity is perhaps most stark in the number of healthcare workers available. In the north, there are 12.1 healthcare employees per 1,000 residents. In the south, that figure drops to 9.2 per resident. Citing data from the Ministry of Health, one of the biggest newspapers in southern Italy, Il Quotidiano del Sud, highlighted the regional difference: almost all southern regions are below the national average of 2.65 beds per 1,000 residents, which itself is almost half of the 4.7 average among members of the Organisation for Economic Co-operation and Development (OECD), reported II Quotidiano, adding that the total number of beds in the country fell by 30% from 2000 to 2017.

“We are ready for the worst,” said Iacobello, the infectologist in Catania. As of March 26, his hospital was treating 29 COVID-19 patients, six of them in intensive care. He is ready to mobilize new units, which can be expanded to 110 beds for coronavirus patients, if required. He worries it is insufficient.

Iacobello’s main concern is about testing his patients. “We want to be sure about the disease they have, in order not to make the mistake done in the north. The labs are few so even with more tests there is a risk of delay in providing the results,” he admitted. The supply of medication is also a critical concern; though he and his northern Italian colleagues saw results from some antibiotics and antivirals (including some used to treat HIV), he knows that every hospital is ordering the same drugs and this will inevitably cause shortages, forcing him and his coworkers to make difficult decisions.

On April 3, my father started to show signs of improvement. His breathing was still assisted by oxygen mask, but the only treatment he was still receiving was a daily dose of cortisone. He remained hospitalized until April 11, when he returned home without oxygen or cortisone, but with instructions for pulmonary rehabilitation. He is self-isolated from my mother and brother, who’d been preparing the house for his return. The room which once was mine is now his until the end of his convalescence. They are quarantined, unable to leave home for at least two more weeks, likely more.

Many other families with relatives who tested positive are in the same situation, living with the same anxiety, uncertainty and hope. Even those who have maintained their health through the crisis have had to cope with the ever-shifting reality of isolation. Italy seems to be close to the moment when it finally “flattens the curve,” but the threat of coronavirus won’t end there: there’s considerable fear in the government of a new wave of contagion in the south. And, despite their preparations, doctors in those regions know that they are entering this fight at disadvantage.

As Dr. Iacobello said: “We are navigating by sight in a thick mist.”