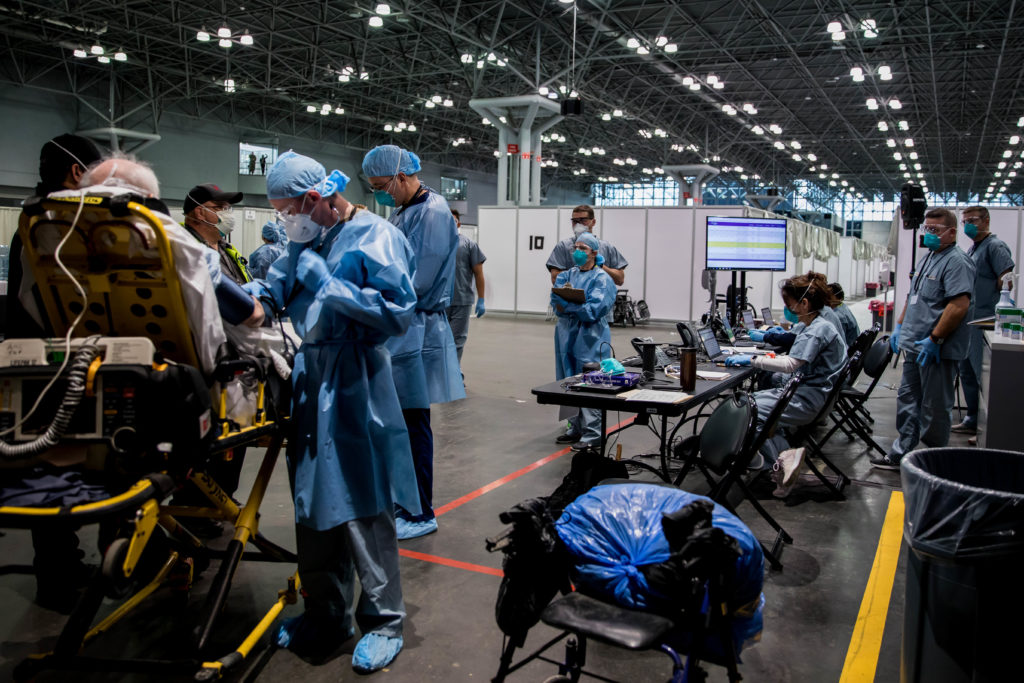 At 5:30 each morning, Julie Bevers descends into the lobby of the New York City hotel that she has lived in for the last three weeks. She’s been awake since 4:00 a.m., meditating and writing in her prayer journal in preparation for her first encounter of the day: a busload of healthcare workers returning from the battle against COVID-19.

“That’s the night shifters coming in,” Bevers said. “There’s about 600 of them in just this hotel alone.”

But Bevers isn’t a doctor or a nurse; she’s a chaplain. She’s stationed in one of the many hotels housing healthcare workers who have traveled to New York, the state most ravaged by coronavirus, to lend a hand in the fight against the pandemic. Yet for Bevers and other spiritual care providers on the front lines of the crisis, the responsibility of tending for the sick and suffering isn’t just about supporting those infected with the virus—it’s about the people who provide their care, too.

“Some of these nurses will go to work and have 11 patients, and nine of them might die,” Bevers said. “It’s a cumulative, day-after-day mental, physical and spiritual fatigue.”

The doctors and nurses return to the hotel in two shifts each day, at 5:30 a.m. and 9:30 p.m., and, at both, Bevers is there to greet them. Some come straight to her for counseling, while others take a shower or a nap before returning to sit with her later.

“They came here to save people, and they’re feeling very worthless when their patients die,” she said. “We’re trying to catch them and give them some words of encouragement, let them know that the things they are feeling are very normal.”

That many healthcare professionals are bearing the brunt of the pandemic is no surprise: when they’re not dealing with shortages of masks, space or medical equipment, they are witnessing unprecedented rates of illness and death. But only in recent weeks have questions about their own mental and emotional well-being begun to surface.

“What we’ve seen in the last month is a real demand for chaplains in healthcare organizations,” said Wendy Cadge, founder of the Massachusetts-based Chaplaincy Innovation Lab. “First, because of the anxiety of the staff,” she said, and second, because visitors and family members can’t enter hospitals for risk of contamination.

The Innovation Lab is comprised of scholars, theologists and educators who support chaplains who support chaplains across the country in their work. For the last several weeks, they have met virtually to address the role of spiritual care providers in the pandemic, and many are beginning to sound the alarm about the emotional toll the virus is extracting on all those on the front lines. Instead of relief, these experts say, what is likely awaiting medical workers on the other side of the pandemic is post-traumatic stress.

“We know that after this passes, there’s going to be a huge amount of PTSD among healthcare providers,” Cadge said. “We’re trying to prepare for that.”

According to the Rev. Dr. Storm Swain, a scholar of trauma and theology at United Lutheran Seminary, it’s not just the magnitude of the crisis that is creating a challenge for those fighting it—it’s the very nature of the pandemic itself.

“We’re all kind of focused on the peak of the curve with the illusory idea that when we get to the top of that, we’ll be coming down the other side,” she said, “but this is going to be a very long disaster.”

Unlike earthquakes, terrorist attacks or other tragedies in which responders work primarily in the aftermath, there’s a relentlessness to COVID-19 that creates a feeling of inescapability. According to Swain, this keeps the body’s “fight-or-flight-or-freeze” response activated at all times, exhausting those most crucial to the fight.

“One of the things that is different about this is that there’s not a line between ‘home’ and ‘away,’” she said. “You are living in a state of increased arousal and fear, and there are layers and layers of stress. Burnout is a probability, not a possibility.”

And it’s not just in New York City. In Los Angeles, Father Chris Ponnet, head of the chaplain training program at Saint Camillus Center for Spiritual Care, said he, too, has seen an increase in demand for help with healthcare workers from the three L.A. hospitals his chaplains serve.

“A lot of our chaplain work at this point has been dealing with anxiety among the staff,” he said. “We are overemphasizing our time with staff because if we can help them be less anxious, they will serve the patients better.”

At Union Hospital in Terre Haute, Indiana, the Rev. Deb Moore-Hardin said that her standard rounds have extended into an afternoon prayer circle with intensive care doctors and nurses, at the doctors’ request.

“They said, ‘We think it could help us get through the day if we could pray,’” she said.

From where Moore-Hardin stands, ministering to hospital staff is a natural role for chaplains to fill.

Like Swain, Moore-Hardin also feels that there’s a physiological response to the pandemic that is making emotional healing more difficult. She compared the COVID-19 crisis to a combat situation in which responders can only focus on what needs to be done in the moment.

“When the moment ends, suddenly you can think about what just happened,” she said. “Then it’s the time to be exhausted, to really cry for patients that you lost, to feel all the emotions that you kind of pushed aside and kept at bay.”

Several experts used the terminology of war to describe their experiences; “front line,” “battle” and “combat” came up again and again, as did comparisons to 9/11. For those who have witnessed the virus firsthand, or who have been forced to decide between two patients who need a ventilator, or who have facilitated video calls for families who are not allowed to visit dying loved ones, these terms are the only words that apply.

“It is like a war, honestly,” Bevers said. “It’s landing on the ground where they are and helping them to hopefully stop the bleed.”

What exactly “stopping the bleed” looks like depends on who you ask. For Swain, it’s encouraging people to seek out small moments of humanity; for Moore-Hardin, it’s practicing self-care. For Bevers, it’s about urging healthcare workers to recognize the extraordinary role they are playing in this historic time.

But chaplains are humans, too. Bevers finishes each shift around 11 p.m. each night and retreats upstairs to write in her prayer journal and speak with her husband and daughter in California. She hasn’t had a day off in nearly a month, and she said she will remain in New York for a few more weeks before moving into a mandatory 14-day quarantine and returning home.

After tending to her own spiritual and emotional well-being, she will likely head out on another deployment, either back in New York or wherever she is needed most.

“Lord send me,” she said, “wherever that might be.”