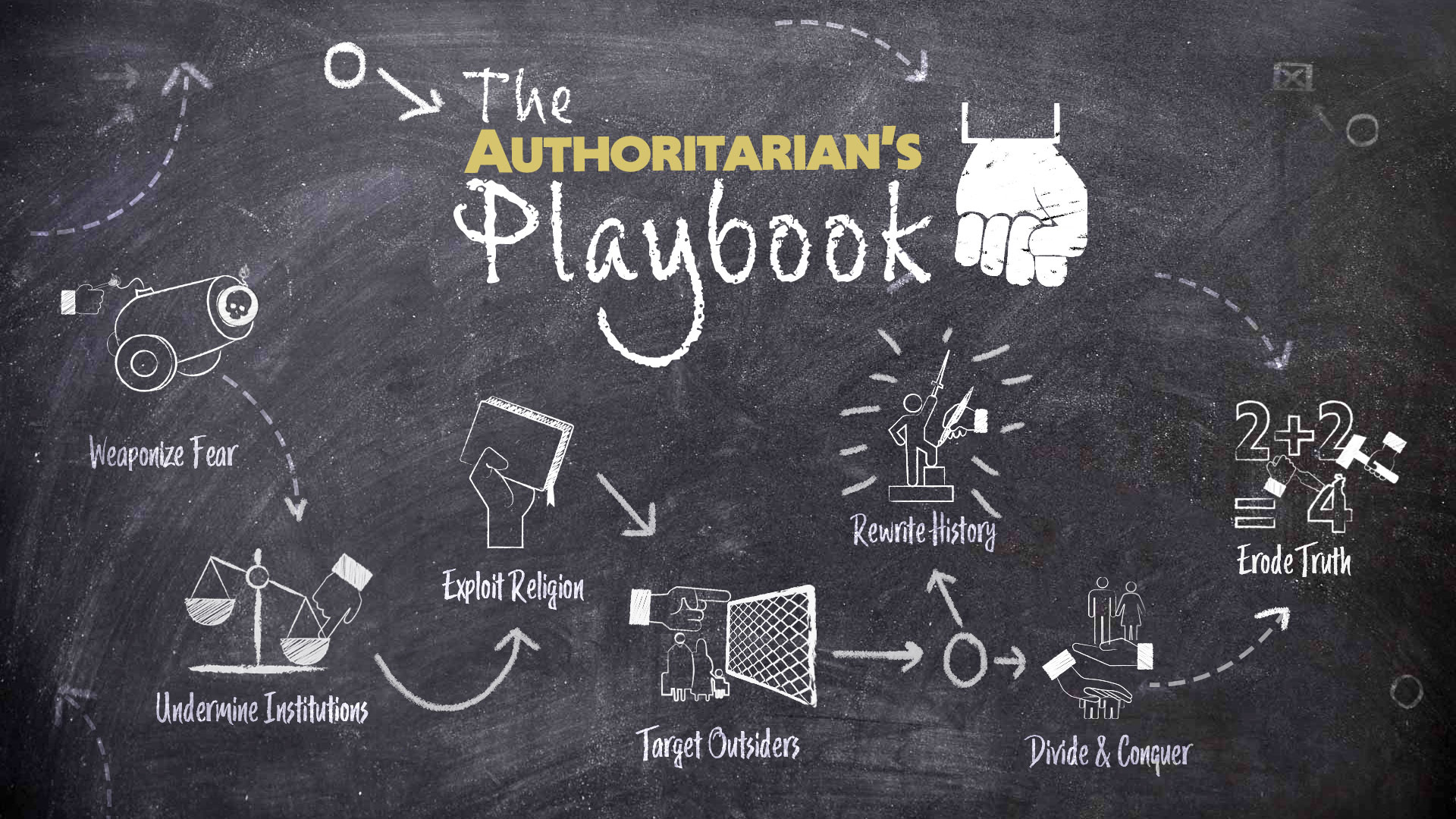 WASHINGTON – The hallmarks of populist nationalism are gaining ground in many of the world’s largest democracies from Modi’s India to Bolsonaro’s Brazil and Trump’s America. In these, and many other countries, elected leaders are flirting with aspects of authoritarianism in an extreme era of digital disruption, mass migration and the mounting effects of climate change.

In this project, Democracy Undone: The Authoritarian’s Playbook, GroundTruth reporting fellows in India, Brazil, Colombia, Hungary, Poland, Italy and the United States chronicled how seven nationalist leaders in each of these countries seem to be working from the same playbook.

It is a playbook that our reporting team has pieced together from the speeches and techniques in use by an interconnected web of populist leaders and their strategists as a way to gain power, impose their values and implement their agenda. The reporting is not intended to suggest that each of these countries is now under an authoritarian regime, but that their leaders are showing instincts and inclinations that lead to a brand of populist nationalism that, if history is a guide, can lead to authoritarian government. Scholars on democracy say they seem eager to join China, Russia, Saudi Arabia and other leading authoritarian states in stamping out democratic protections and reshaping the global order.

Key “plays” in The Playbook include:

Weaponize Fear – Embrace a language of violence, promote a more punitive culture, leverage military might at home. Give critics reason to believe they’ll be harmed if they oppose.

Target Outsiders — Stoke the fires of xenophobia by demonizing immigrants and foreigners. Blame domestic problems including economic woes on these scapegoats, and depict political opponents as sympathetic to these imagined enemies.

Rewrite History — Exert control over schools and the media to indoctrinate the public with beliefs that reinforce autocratic power.

Divide and Conquer — Use hate speech and encourage violent actors to widen social rifts and use manufactured crises to seize more power.

Erode Truth — Attack the press as an “enemy of the people”; dismiss negative reports as “fake news,” counter legitimate information with disinformation, or “alternative facts.” Blast the media landscape with endless scandal and contradiction to overwhelm the traditional fail-safes.

As part of what he calls “The Movement,” Bannon’s influence is evident in populist parties across Europe, South America and Asia. Cambridge Analytica alone played a major role in the recent elections of the U.S., Brazil, U.K., India and the Philippines, using targeted social media campaigns based on sophisticated user data to startle voters and push outcomes toward populist candidates and illiberal ideas. But sophisticated algorithms aren’t necessary to participate: Paid and unpaid propagandists of all stripes can spread misinformation both knowingly and unknowingly on Facebook, Twitter, WhatsApp and other platforms, shifting public opinion in a way once reserved for government agencies and major media outlets.

Another common thread? President Trump himself. He has pursued warm relationships the six leaders profiled in this project as well as with autocrats like Recep Erdogan in Turkey, King Salman in Saudi Arabia, Abdel Fattah el-Sisi in Egypt, Rodrigo Duterte in the Philippines, Kim Jong Un in North Korea, and of course, Vladimir Putin in Russia.

From holding hands with Indian Prime Minister Narendra Modi at a “Howdy, Modi!” rally in Houston last month to offering quick congratulations to Brazilian President Jair Bolsonaro after his election victory and offering a warm White House reception to Hungarian Prime Minister Viktor Orbán in May, Trump gravitates toward a certain kind of leader.

He’s spearheaded unprecedented collaboration with authoritarian leaders on foreign policy, including a Trump deal with Turkey to permit a military incursion into Northeast Syria, putting America’s longtime Kurdish allies in grave danger and providing the Russian and Syrian governments with more leverage there, along with a whitewashing of the Saudi government’s murder of journalist Jamal Khashoggi while sending thousands of additional U.S. troops into the Kingdom.

Trump’s alliances and his actions at home fail what scholars Steven Levitsky and Daniel Ziblatt call “a litmus test for autocrats” in their 2018 book “How Democracies Die.”

The four criteria are:

By Levitsky and Ziblatt’s analysis, Trump meets all four criteria, the first American president since Richard Nixon to fulfill even one of these conditions.

As part of what author and scholar Sarah Kendzior calls “authoritarian kleptocracy,” the Trump administration’s alliances enrich a small group of leaders and their cronies while attacks on democratic institutions, including the free press, provide cover for repressive rulers around the world.

Listen: The full interview with Steve Levitsky, co-author of How Democracies Die

In just one instance, Syrian dictator Bashar al-Assad dismissed an Amnesty International report detailing as many as 13,000 extrajudicial killings by Assad’s regime at the Seydnaya Prison between 2011 and 2015 by saying, “You can forge anything these days. We are living in a fake-news era.”

As Arturo Sarukhan, Mexico’s former ambassador to the United States, said on Twitter, “What happens to democracy in the US reverberates globally. Trump’s further erosion of democracy would have a domino effect felt around the world.”

Democracy is fragile, and susceptible to attack from the inside. Drawing strength from economic resentment and underlying prejudice, populist authoritarian leaders have a knack for turning election victories into mandates to dramatically reshape power structures that reinforce the power of the few over the many. That paradox is explained by Jan-Werner Müller, a political scientist at Princeton University, in his 2016 book What Is Populism?

“In addition to being anti-elitist, populists are always anti-pluralist. Populists claim that they, and they alone, represent the people,” Müller wrote.

In accepting the presidential nomination at the Republican National Convention, for example, President Trump proclaimed. “Nobody knows the system better than me, which is why I alone can fix it.”

But the logic goes deeper, with insinuations and outright proclamations that certain groups are more entitled to the resources and protections of the country.

In authoritarian governments and those leaning in that direction, even the veneer of protecting all of the people is ripped away, opening the door for mass incarceration, police and military executions and new laws limiting the freedom of religious and ethnic minorities. Mass displacement in regions destabilized by violence, economic weakness and climate disruption only exacerbates this process, while those same leaders deny the science confirming climate change.

In a piece for the South China Morning Post, GroundTruth fellow Soumya Shankar reported that some of India’s most extreme Hindu nationalists have found kindred spirits in white supremacists worldwide over a shared hatred of Muslims.

Hate crimes against Muslims, Christians and Sikhs have skyrocketed during Prime Minister Narendra Modi’s tenure, according to a University of Massachusetts-Amherst study. And a dramatic policy shift on the contested region of Jammu and Kashmir led to a violent and ongoing lockdown in the Muslim-majority region.

“With the coming of Modi, people know they can get away with violence, and are more vocally Islamophobic on social media,” journalist Kashif-ul Huda told GroundTruth’s Shankar. Meanwhile the most zealous Modi supporters have launched sustained online harassment campaigns against political opponents and journalists including Shankar.

India’s ambassador to the U.S. Harsh Shringla met with Steven Bannon in September briefly posting a photo celebrating Bannon as a “legendary ideologue and ‘Dharma’ warrior,” apparently a reference to a 2017 profile that explained his worldview in terms of the Hindu concept of “duty” and an imagined return to dominance of traditional social values.

Bolsonaro, like Trump, is given to referring to the press as the “enemy of the people,” and has his own Bannon-like advisor, a man named Olavo de Carvalho who helped provide Bolsonaro with the rhetorical key codes and online following he needed to win.

Olavo met with Trump and Bannon in Washington, D.C. in March. At a dinner hosted by the Brazilian ambassador, Bolsonaro said his dream was “to set Brazil free from the nefarious leftist ideology.” Turning his eyes to Olavo, he said, “The revolution we are living, we owe in large part to him.”

Speaking at an event honoring him with Brazil’s highest diplomatic award in August, Olavo bragged, “My influence on Brazil’s culture is infinitely bigger than anything the government is doing. I am changing Brazil’s cultural history. Governments go away, the culture stays.”

The language is familiar. Former Cambridge Analytica staffer Christopher Wylie, testifying before Congress last May as a whistleblower who had an inside perspective on how the company scraped Facebook data to create social media campaigns to help elect Trump, said Bannon “saw cultural warfare as a means to create enduring change in American politics.”

Soon after leaving his post as Trump’s advisor in the wake of the violent white nationalist rally in Charlottesville, where one protester was killed, Bannon shifted his efforts to Europe, working closely with Hungary’s Orbán and Italian far-right leader Matteo Salvini, who until recently held the respective positions of deputy prime minister and minister of the interior.

“I have an exceptional relationship with Salvini, I think he and Viktor Orbán are the two most important politicians in Europe today,” Bannon told El País in March. “More than Trump, he and Salvini defend the idea of a Judeo-Christian West. And it is something that is also close to Vox [Spain’s right-wing nationalist party]: traditional family, society structure, war against cultural Marxism … Remember that this movement is populist, nationalist and traditionalist. And Bolsonaro and Salvini are their best representatives,” added Bannon.

A shift against liberal democratic values and the global institutions that have reinforced them is underway, with Bannon and his allies proving remarkably successful. His “culture war,” fueled by the Internet and the media echo chambers it fuels, is becoming a dominant global paradigm.

And though leaders like Modi, Bolsonaro, Orbán, Kaczyński and Trump are democratically elected, populist authoritarians seize hold of the levers of democracy and turn the machine in on itself to satisfy their own ends. As believers in a more pluralistic world evaluate their next moves and how best to counter the rise of populist nationalism across the globe, they might do well to study The Authoritarian’s Playbook.

The GroundTruth Project, with support from the MacArthur Foundation and the Henry Luce Foundation, invite you to follow along as we release a series of podcast episodes in partnership with PRX and WGBH, as well as a series of feature articles with The Atlantic. GroundTruth fellows are reporting from India, Brazil, Colombia, Hungary, Poland, Italy and the United States.