The action, and promise, behind Native American representation in the US 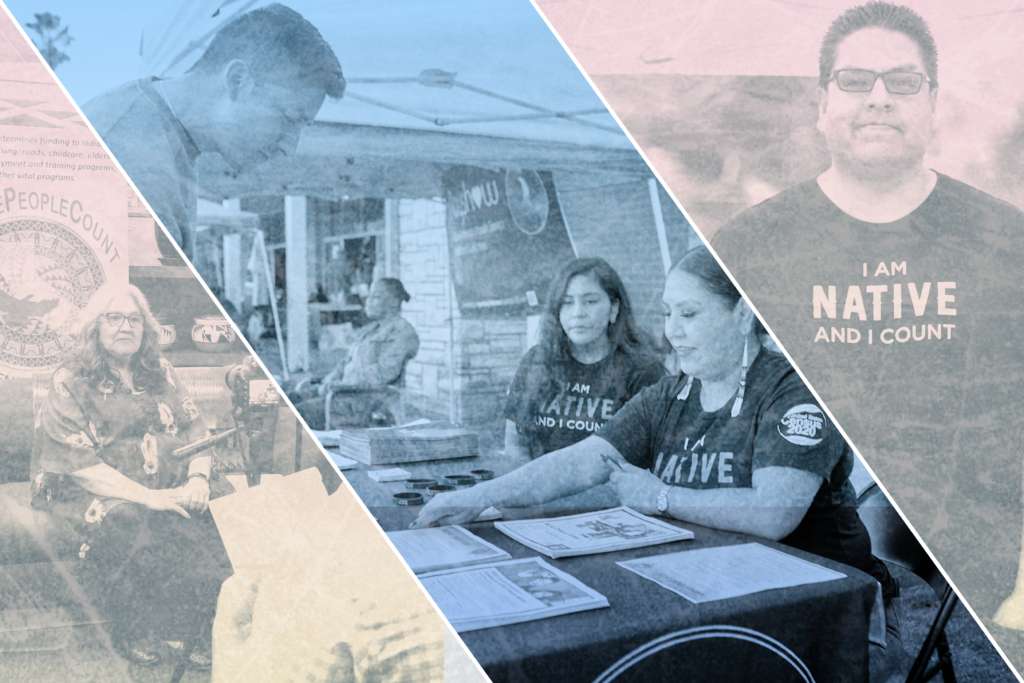 AGUA CALIENTE INDIAN RESERVATION, Calif. — The ratification of the 19th Amendment 100 years ago was the single greatest expansion of the right to vote in the nation’s long and troubled history of extending political inclusion.

But even as white women and some women of color won suffrage in 1920, Native Americans were not recognized as citizens. It would take another four years to gain citizenship and another four decades before every U.S. state would recognize the right of Native Americans to vote. The struggle for American Indian enfranchisement is as long as the history of the nation itself and continues to this day.

For James Ramos, who hails from the Serrano/Cahuilla tribe near San Bernardino, California and is the first Native American elected to the California State Assembly, that struggle is still very much alive.

“Native Americans were denied American citizenship and voting rights until 1924, and that history had a chilling effect on electoral and civic participation,” said Ramos, a Democrat from Highland, speaking  earlier this month before the California Assembly, which approved a legislative proposal to help Native Americans gain greater access to the electoral process and passed the proposed measure to the Senate.

“Even after gaining citizenship,” he added, “not all tribes were given full access to the precious right to cast a ballot.”

California is home to more than 723,000 Native Americans, the most of any state in the country. Some reflect the success that comes from owning gleaming, 27-story casinos near Palm Springs, while others, as on the Torres Martinez reservation just an hour southwest, wither under the desert sun from a lack of access to basic resources, like clean water. The spectrum is wide, but the history of discrimination and disenfranchisement is woven into the Native American experience, says Ramos.

Ramos himself grew up in a mobile home in one of the poorest areas of the state, on a reservation founded by his great great-grandfather in 1866. His initiatives have sought to recognize tribal lands upon which schools and libraries sit; reduce rates of missing and murdered Indigenous women; and expand representation on an ancestral repatriation committee. In his experience as an elected official, Ramos believes the fight for Native American rights, especially voting rights, is at a critical turning point.

“That right to vote gives each person a say in how they will be governed, who will guide school districts and counties, a say in passing measures for parks, hospitals, roads, water lines, roads, libraries and more. Voting also impacts how we and our families live,” Ramos said.

“I look forward to the day when it is not unusual to have Native Americans in public office and when I am not the only California Native American in the Legislature,” he added.

It was not until 1948 that the right of Native Americans to vote in U.S. elections was recognized through two landmark legal cases. And Native Americans were still not eligible to vote in every state until 1962 when Utah became the last state to remove formal barriers.

Through the decades that followed, American Indians, like African Americans and other minorities, faced barriers to voting such as poll taxes, literacy tests and intimidation. Many Native Americans who live on tribal lands do not have formal addresses, which are often required for state-issued identification, and election laws end up discriminating against Native Americans “either by intent or consequence,” according to research by the Brennan Center, a non-partisan law and policy institute that focuses on voting rights. Native Americans also face a lack of allocation for resources for polling places often causing voters to travel long distances to cast their vote.

“Every barrier imaginable is deployed against Native American voters,” reads a report published this month by the Native American Rights Fund, a half-century-old nonprofit law firm, established to protect the rights of tribes and the individuals within them. Its report documents two years of witness testimony from approximately 125 members of tribes in the U.S., who collectively point to an ongoing struggle for adequate representation for Native Americans. Restrictive voting laws, including ID and address requirements, voting roll purges and the removal of federal protections have disenfranchised Native American voters, advocates say.

Native Americans have the lowest voting rate of any American racial group, an outgrowth of having one of the lowest voter registration rates in the U.S. Nearly two out of five eligible Native Americans nationwide are not registered to vote, in part because of the challenges that come with living in rural communities, such as a lack of traditional residential addresses, access to broadband or a nearby polling place. Fifty-four percent of the American Indian and Alaska Native population live in rural areas and 68% live on or near their tribal homelands, according to the First Nations Development Institute.

This persistent legacy of Native American disenfranchisement, Ramos explained, is why voter turnout among Native Americans is 5 to 14% lower than that of other ethnic or racial groups. Ramos’ recent  measure attempts to address the issue, calling for the Secretary of State to create and consult with an advisory committee, made up of voting rights advocates or county election officials, to make voting more accessible to Native Americans.

Ramos represents constituents in San Bernardino County, which, with adjacent Riverside County, is home to 14 tribal communities. Among them, resources vary widely. The Agua Caliente Band of Cahuilla Indians, a sovereign tribal government located near Palm Springs, California, have land that is integrated with surrounding cities, including Palm Springs, while others, like the Torres Martinez Desert Cahuilla Indians, just an hour’s drive southeast, have only one general doctor on the reservation, and many tribal members living on the reservation lack access to the internet, a cell phone or landline.

The unique vulnerabilities of living on rural reservations and, often, difficulties of access to basic necessities have contributed to decades of Census undercounts and consistently low voter registration among Native Americans. These conditions in turn result in their chronic underrepresentation from the polls to the legislature, say legal advocates, a cycle they have fought for decades to interrupt.

Most Native Americans living on reservations vote in-person, states a 2018 Native American Voting Rights Commission report, and many are distrustful or unfamiliar with mail-in voting options, particularly important for ballot access in this year’s presidential election. Some said they did not receive a ballot, while others had difficulty filling out the ballot, including describing nontraditional voting addresses.

“From what we’ve seen, it’s really beneficial when there is a nearby polling place,” said Jesse Fraire, regional outreach manager of the California Native Vote Project, a non-profit focused on voter engagement among Native Americans. More vote when there is a “safe, trusted, local place.”

The significant undercounting in the Census and low voter turnout by Native Americans in elections are closely intertwined, advocates say, pointing to the need for Native representation and participation across the spectrum of government and institutions.

Lorenda Sanchez, executive director of the California Indian Manpower Consortium, has worked with Native communities on reservations for 40 years, seeking to turn the tide on Native American political engagement and self-determination with consistent outreach and providing information on the process.

Approximately 4.9% of Native Americans living on reservations go uncounted by the U.S. Census Bureau, a rate more than double that of the next highest undercounted racial group, Black Americans. The California Native Vote Project is one of two organizations, along with the California Indian Manpower Consortium, contracted by the state in 2019 to lead Census education efforts throughout Native American communities. The consortium also works with tribes and counties to establish polling places on reservations. It is active in 20 of California’s 58 counties and engages Native American voters through in-person outreach, phone banks, youth organizing, voter registration drives and education.

The 2010 Census identifies 5.2 million people in the United States as American Indian or Alaskan Native but 1.2 million eligible Native American voters—34%—aren’t registered to vote, compared to 26.5% of the country’s non-Hispanic whites, according to the National Congress of American Indians. The turnout rate among those voters is between 1 and 10 percent lower than other ethnic and racial groups in the U.S. If Congressional representation was proportional to the nation’s Native population, there would be two Native American Senators—of which there are none—and eight Native American members of the House of Representatives of which there are four.

In 2018, congresswomen Deb Haaland, D-N.M., a Laguna Pueblo tribal member, and Sharice Davids, D-K.S., a member of the Ho-Chunk Nation, became the first Native American women to serve in Congress.

“I can speak from the heart about the fact that Indian Country doesn’t have electricity, running water or broadband internet services in some areas because I’ve lived that,” Haaland said. “Those are the things that representation brings.”

A key selling point for Native Vote Project canvassers encouraging Native Americans to vote, said Fraire, is the ability to point to the election and work of the congresswomen, who advocate on issues affecting their daily lives.

“Native people need to have a seat at the table,” Haaland said. “I mean, it’s 2020 for heaven’s sake … They deserve to have their voices heard.”

Risa Johnson is a Report for America 2020 graduate. She covered Native American communities for the Desert Sun. This dispatch is part of a series called “On the Ground” with Report for America, an initiative of GroundTruth, and now featured on an all-new season of the GroundTruth Podcast. Johnson’s reporting will be the focus of an upcoming episode. Follow her on Twitter: @risamjohnson