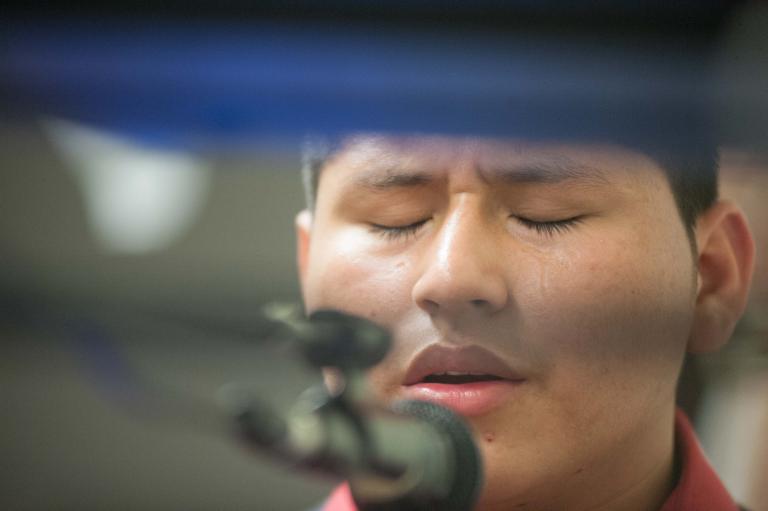 Marvin Velasco, 14, sings and plays the keyboard at San Juan 3:16 Church in Los Angeles, California. The parish became Marvin's safe haven after he made a solo journey of more than 2,000 miles from Guatemala to the US last year. - ((Charlie Magovern))

LOS ANGELES — The tiny storefront church is located in a dingy strip mall in Mid-City Los Angeles. A faded poster on the door displays in Spanish the biblical passage John 3:16: For God so loved the world, that He gave his only begotten son, that whoever believes in him shall not perish but have eternal life.

The single room is cloaked with faded, previously crimson curtains and lined with eight rows of mismatched folding chairs. Religious relics including a menorah and a large Styrofoam crucifix adorn the petite pulpit. An electric keyboard, drum set and bass guitar consume the remaining floor space. The instruments come naturally to the church’s newest member, Marvin Velasco, a 14-year-old immigrant who left his family and hometown in Guatemala last year to make a more than 2,000-mile journey to Los Angeles.

Now, dressed like any American teen, wearing jeans and a grey polo shirt with his school’s emblem, this cherubic boy discusses his life in Guatemala with little emotion and speaks of the sojourn to the US as though it was his daily commute.

“I no longer wanted to be in a country where I didn’t have many opportunities, where I believe I will always be the same [and] can never change my situation,” Marvin said.

So left his hometown El Ceibo de La Libertad, Petén, a small, dilapidated city of 30,000 straddling the Guatemala-Mexico border. Until the morning he departed, Marvin had followed the lead of his four older siblings, leaving school after the sixth grade to help support his family. The livelihood of 12 relatives depended upon the family business of peddling clothes at the border.

Marvin said he longed for an education, dreaming of making a life as a musician. His father Carlos Velasco, a community pastor and a musician, shared his son’s love of music and taught him to play several instruments.

Unlike many of the tens of thousands of unaccompanied Central American immigrants who have come into the country in recent months, Marvin was not threatened by gangs or escaping an abusive home. He begged his parents to let him make the risky journey to the US and they eventually agreed. He set his sights on San Antonio, Texas where a cousin had volunteered support.

Marvin’s parents took out a bank loan and made arrangements for him to travel with Hernandez, Marvin’s 19-year-old brother-in-law, and a coyote, or paid smuggler. Marvin recalls staying in hotels and catching trains to cross Mexico without any problems.

At sunset at the Mexico-Texas border, Marvin and about 12 others crossed the Rio Grande in an inflatable raft, he said, and then traveled by foot for an hour before wading through waist-high water in another river. Marvin lagged behind and was separated from the group.

The darkness in the desert was oppressive. Sand crunching beneath his sneakers, Marvin desperately hid from the stark-white flashlight beams of Immigration and Customs Enforcement (ICE) officers. He watched quietly as the agents captured and beat Hernandez.

His clothes, soaked from the river, stuck uncomfortably to his body.

“I became even more afraid because I was lost in the middle of nowhere with no one and nothing,” said Marvin. “I thought about my family and why I had decided to travel.”

Shivering and terrified, he longed for the comfort of his mom and dad.

Finally, Marvin surrendered to US Customs agents, a better prospect than dying alone in the desert. Yet the officers manhandled him, pushing him roughly into a government SUV.  It was the only time in his journey, Marvin reports, that he was mistreated.

“When you arrive Immigration treats you like you amount to nothing, like you are worthless,” he said.

Once the agents learned he was a minor, they softened and took him to a Customs and Border Patrol detention center, called La Hielera, the “ICE Box.” It was cold, no natural light could enter the building, and the officers would not tell the detainees anything.

Food consisted of one sandwich a day. Several kids were kept in a single cell with one toilet and no beds. Marvin said he slept standing. He recounted this experience with a detached, matter-of-fact delivery, as though he was discussing another person’s misfortune.

Once Marvin was in ICE custody, the cousin in San Antonio who had offered help changed his mind. Marvin became trapped in an unforgiving US government system. He was sent to an ICE youth detention facility where he was held for 40 days, unaware that Hernandez had been returned to Guatemala.

Marvin’s parents made arrangements for Hernandez’s father, Valentin, to take care of the boy in Los Angeles.

Valentin expected Marvin to be a worker, not a student. He refused to enroll Marvin in school and some days he withheld food, Marvin said. The boy was often left alone. Valentin asked Marvin’s parents to send money so he could return him to Guatemala. Again, Marvin was frightened and alone, but this time it was in the middle of the congested downtown L.A. neighborhood of Mid-City.

In the midst of their troubles, on an October night last year, Valentin and Marvin attended an event at the storefront church, San Juan 3:16, where Valentin introduced Marvin as his grandson. The boy wowed the congregation with singing and playing the organ, drums, trumpet and bass.

Three weeks later, Pastor Juventino Esquivel learned of Marvin’s difficult living situation. Standing with him at the pulpit, the pastor made a plea to find Marvin a new home. Valentin was not there.

Ingrid Ainspac, a devout parishioner, decided the only way she could help Marvin was by making him part of her family. It was not a difficult decision for her, she said, because she needed him too. Eleven years ago her 15-year-old son Raneyro was killed in a gang-related drive-by shooting. A stray bullet killed him, piercing his heart.

Ingrid stood up and told the 40 worshipers that she was willing to take Marvin in.

“People over there have house[s] and don’t have kids,” Ingrid recalled thinking to herself, “What kind of church is this? Nobody helps.”

Ingrid didn’t consult her husband, she said. Providing for Marvin was the right thing to do. She asked Marvin if he wanted to live with her, and without hesitation or emotion, he said yes. He had no other options.

Marvin moved in with Ingrid that night. It was an easy relocation from Valentin’s place, as he had only one other pair of pants and one shirt.

Ingrid has a full house, with a husband, an elderly mother and two adult children squeezed into her two-bedroom condo. Still, she made room for Marvin.

A twin-size mattress, draped with a Mickey Mouse quilt and flanked by two dressers in the corner of Ingrid’s bedroom, became Marvin’s quarters. Adjacent to his bed is a mirror donned with a 1994 calendar made with 6-year-old Raneyro’s handprints. But Marvin says she rarely speaks of him.

Ingrid is also an immigrant from Guatemala. She moved to Los Angeles 35 years ago with her best friend, marrying soon afterward. She still uses her first husband’s British last name, though she said domestic violence ended that marriage nearly two decades ago.

Standing at 5’3” with olive skin and a ready smile, Ingrid radiates strength and warmth. Her loose-fitting, stylish black shirt and long skirt shroud her physique.

She is two years into her battle with breast cancer, including a double mastectomy, radiation and chemotherapy. Ingrid has declared her body free of cancer because, she believes, God has more work for her to do. She may be right: her doctors have not found any sign of relapse.

Ingrid works as a promotora, or community educator, for St. John’s Wellness Center.

Even during chemo treatments, she continues to help patients find resources. She knows cancer, domestic violence and the perils of immigration firsthand. She also knows the heartbreak of losing a child.

“Everyone knows Raneyro was my favorite,” says Ingrid. “I think because he was a troublemaker and needed me more.”

Ingrid didn’t take any chances with her new son. On the very day she got guardianship last December, she took Marvin to her workplace.

St. John’s is a federally qualified health center, a safety net provider for impoverished Angelenos in South L.A. The clinic’s serene, muted blue and lavender walls don’t dampen the bustle of Spanish-speaking mothers, crying toddlers and staff hustling to care for everyone.  Even with all the commotion, the clinic has a friendly feel.

“Nearly all of the children, especially the adolescents, have physical or mental trauma,” says Dr. Shom Dasgupta-Tsinkas, medical director of St. John’s. “[A]nd almost all have PTSD, post-traumatic stress disorder. It makes integration [into a new environment] difficult when you see the world as a dangerous place.”

The majority of the kids require psychological services, but Marvin wasn’t like most immigrant minors. He received a good bill of health, with no acute mental health needs.

Ingrid enrolled Marvin into West Adams Preparatory High School. The monster-sized facility is home to 2,700 students. The pale yellow structure with drab gray cement enclosed by wire fencing and patrolled by uniformed officers looks more like a prison than a school, but Marvin is happy to be there. Although he hadn’t been in a classroom for two years, he is taking the regular 9th grade curriculum with English as a Second Language.

He said his favorite class is music where he spends time perfecting his trumpet skills. He has a small cadre of friends with whom he practices music and English. Marvin is already planning his sophomore year and hopes to join the marching band.

If Spanish is Marvin’s first language, music is his second. Palpably shy, with his head held down and eyes averted, words do not come easily for Marvin. But melodies do.

At San Juan 3:16, his musical aptitude helped him settle into a community. And on a recent visit to the Thornton School of Music at the University of Southern California, Marvin showed how music brings him comfort.

He found an empty practice room with a grand piano. He sat down immediately and played a somber tune. Gently caressing the keys, he and the piano became acquainted. He closed his eyes and seemed to escape into his own world. Marvin was at home with his new companion.

“When I play I feel my mind clears and remains still on the note, and the person singing or [myself] if I am singing. That is all I feel,” said Marvin. “I want to become a great musician.”

Marvin is one of the more fortunate unaccompanied minors, as he now has a loving home, legal representation and is already enrolled in school. Though far from his family in Guatemala, his dreams for a future are coming true. Ingrid, too, has a second chance with her new son.

“I’d like for Marvin, you know, to be in the school and do something good for the future,” said Ingrid. “That’s what I want. And have a good life like he didn’t have in Guatemala.”