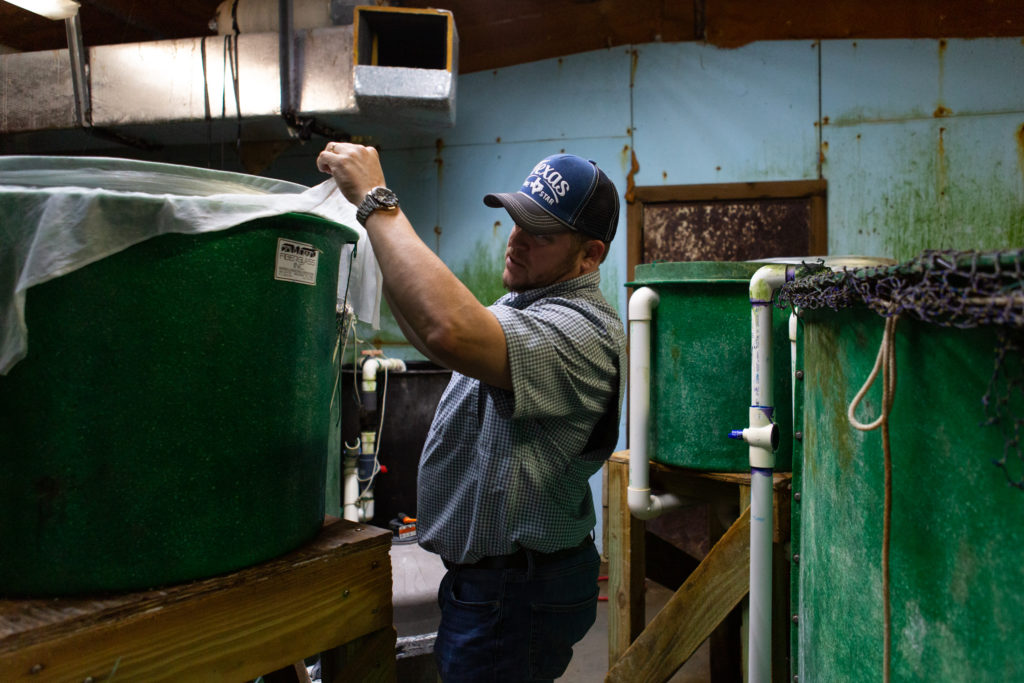 PALACIOS, TEXAS — As other Texans fixed busted pipes and paid off electric bills after the February freeze, Shane Nicaud had to bury 1.5 million pounds of dead redfish into the ground.

Nicaud, the chief administrative officer of Gulf States Aquaculture in Palacios, worked around the clock to keep his fish safe and keep the power on in his hatchery. Still, the best efforts of Nicaud and his employees were not enough to stave off the impact of the subzero temperatures, ice buildup and snowfall that pummeled the Gulf Coast for nearly a week.

“You can mitigate as much as you want, but mitigation cannot beat an act of God,” Nicaud said.

Texas is home to nearly 98% of all redfish farming in the United States, according to Todd Sink, an aquaculture extension specialist at Texas A&M University. The vast majority of those redfish are farmed in four counties clustered around Matagorda Bay — Matagorda, Calhoun, Jackson and Wharton counties.

At least four farmers, interviewed by the Advocate, said they lost a majority of their redfish during the freeze. Two said their ponds were completely wiped out. A precise estimate of the industry’s losses is difficult to find, Sink said, since not every producer reports data to the U.S. Department of Agriculture, but the losses are expected to be in the tens of millions of dollars.

Many of the wholesalers and restaurants accustomed to buying redfish will either have to wait years for domestic production to recover, turn to buying foreign products or simply switch to other species. That’s because a federal moratorium in the 1980s banned commercial harvesting of redfish in the wild.

But it is the farmers who have been hit hardest.

Jim Ekstrom, owner of El Campo-based Ekstrom Aquaculture, who has been in aquaculture for more than 40 years and in redfish farming for 10, estimates he lost at least 1.5 million pounds of fish.

“Not only is it physically demanding, just with picking up putrid carcasses, but it’s so demoralizing seeing your work, the husbandry — you’ve taken care of these animals for, in some cases, two years, hoping to make a crop off of ‘em — seeing them having to get carted away and buried,” Ekstrom said.

There’s some federal financial help but redfish farmers say the disaster assistance programs are woefully inadequate. They say federal officials have so far been unresponsive to their calls for help, even after 11 Texas Congressmen and both of the state’s senators signed off on a letter asking the Farm Service Agency to provide immediate relief.

A federal program known as ELAP is specifically designated to provide financial assistance for fish farmers dealing with losses due to “certain adverse weather events.” But a federal rule limits the program to providing relief for sport or bait fish, making fish grown for food ineligible for coverage.

Bradley Karmen, the FSA’s acting deputy administrator of farm programs, has the sole authority to make redfish eligible for coverage under the program. So far, Karmen has declined to do so.

Redfish farmers are eligible for assistance under the Noninsured Crop Disaster Assistance Program, a USDA spokesperson said. Payouts under that program are typically capped at $125,000, which Brandon Bowers, owner and operator of Texas MariCultures in Palacios, said would not be enough to cover his losses in a single pond.

“It’s the shutdown money,” Bowers said. “That allows you to clean the mess up, to put your books back in order and sell the farm.”

Bowers, whose brother runs a shrimp farm in Palacios, said he “collateralized everything I ever owned” to break ground on his redfish farm in 2018. He weathered plummeting sales during the pandemic and invested hundreds of thousands of dollars to protect his fish from the cold, but the freeze still killed off more than 98% of them, he said.

Now, Bowers likely faces foreclosure, which would put an end to his aspirations of raising his five children on his fish farm.

Sink said he recently spoke to one producer who was sitting in his bank’s parking lot, crying.

“We think there’s only three of the largest farms that said that they were going to even attempt to go again,” Sink said. “It sounds like everybody else, this was the last straw. They’re just done.”

Mark Rosenberg covers politics for Victoria Advocate. This dispatch is part of a series called “On the Ground” with Report for America, an initiative of The GroundTruth Project. Follow him on Twitter: @markrosenberg32