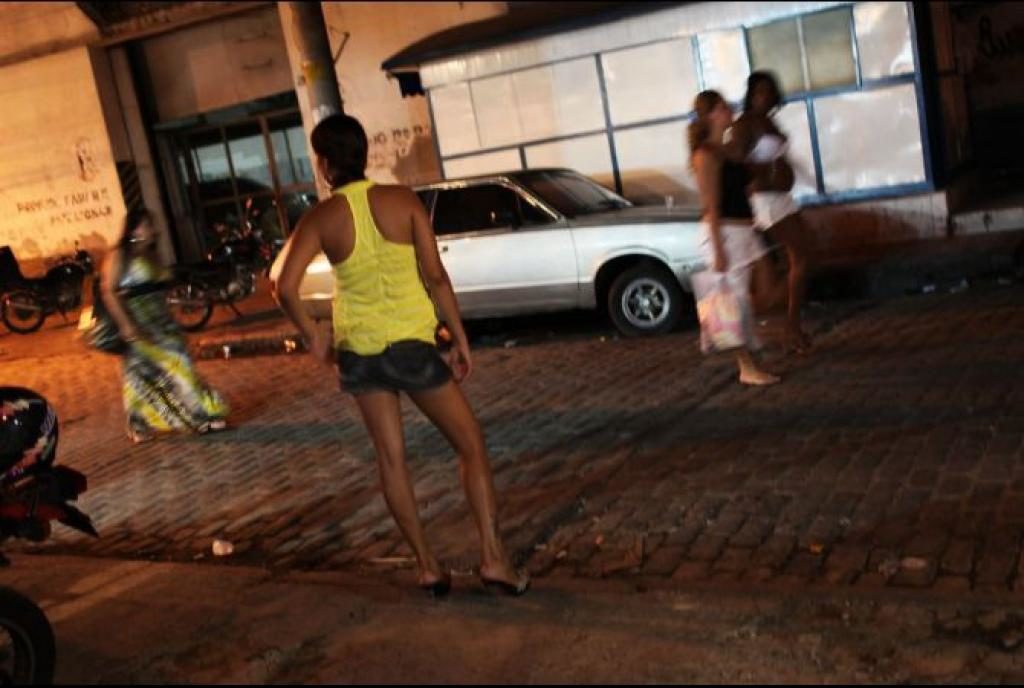 RIO DE JANEIRO — It’s a Saturday night under Rio’s historic Lapa Arches and, despite the tropical drizzle, weekend revelers pack the streets. Nestled between Santa Teresa’s bohemian foothills and the city’s industrial downtown, the Lapa neighborhood works nightly to defend its reputation for the best street parties in Brazil, replete with dirt-cheap caipirinhas by the half-liter and “dirty foot” dance clubs lining the streets.

Rosa M. works two floors up form the street-level chaos, doubling as a prostitute and a bathroom attendant at one of Lapa’s many nightclubs.

Ostensibly, her job is to pass out paper towels and direct patrons to available stalls, though it is here that she meets and conducts the majority of her sexual exchanges. She wears blue jeans, a collared shirt and almost no makeup.

Unlike many of her fellow sex workers, Rosa works “freelance” — she doesn’t rent out a brothel room or work under a pimp or madame, arrangements that bring protection but remain illegal in Brazil. Though the exchange of sex for money has been technically legal since 1949, sexual commerce remains embedded deep within society’s informal sector, seen as a disreputable “spot job,” as Rosa says, rather than a profession deserving of corresponding rights.

While other industries have unionized and steadily built up worker protections, Brazil’s sex workers have been unable to follow suit as they have in other countries where the sex trade has been legalized, plagued by social stigma and strict laws around prostitution.

“It’s lonely and can be scary; I haven’t been at it long,” Rosa told me. “I hear a lot about police brutality … but I have been lucky. I have kids; I don’t want to be doing this forever … I go by the law.”

As Rosa spoke, she looked around, speaking in hushed tones. But why the attitude of secrecy when prostitution has long been legal in Brazil?

“Look, this isn’t the type of spot job you want to be caught doing,” she replied.

Despite sixty years of legality in Brazil, sex work remains one of the most dangerous, stigmatized and unstable livelihoods in the country.

“Prostitution is still highly criminalized in Brazil,” said Simone Gomes, a representative for the ProMundo Institute, based jointly in Brazil and Washington, DC. “Sex professionals’ daily lives are still replete with violations of basic human rights.”

Prostitutes can’t apply for pensions or retirement funds, nor can they receive other forms of government regulation, like identification cards or regularly scheduled health checks. With limited access to health services and given the nature of their work, female sex workers’ estimated HIV infection rate is 14 times higher than the rate for Brazilian women at large.

Brazil’s union federations have routinely turned away sex worker groups as “non-workers,” refusing to recognize sex work as a legitimate profession worthy of mobilization, collective bargaining or strike potential, despite the fact that sex work has been included in the Ministry of Employment’s list of professions for almost a decade.

Thus women like Rosa have found themselves in a nebulous loophole of tacit criminality from which escape is extremely difficult.

In 2002, a São Paulo-based prostitute attempted to create the first Brazilian trade union for sex workers, but it failed to get off the ground due to “juridical issues…and public stigma,” according to an interview with its founder in Problems of Brazil magazine.

In 2003, Congressman Fernando Gabeira worked with activists to introduce an amendment to the Brazilian Penal Code — a document that has remained unchanged since 1940 — that would bring sex work under formal channels of operation. Sex worker collectives would also be legalized and regulated, creating a legal labor relationship that could be monitored for abuses.

In its first appearance on a national level, the Penal Code amendment bill was shot down on a technicality without going to a vote, and has been in and out of parliamentary discussion for the better part of the decade. It hasn’t reappeared in Congress since 2009.

Elsewhere in South America, Uruguay, Ecuador and Bolivia have begun the process of unionizing sex work and thereby bringing the profession into the formal economy.

In Bolivia, over 45,000 sex workers have been formally registered with the government. Among other benefits, they receive weekly check-ups and health examinations free of cost. Currently, unionized sex workers have organized a hunger strike to end the country’s month-long doctor’s strike, which has affected their regularly scheduled visits. The strike has garnered international attention.

Sex workers in Uruguay, united under a trade union, now have identification cards and more regulated health services options. As many as 1,200 prostitutes now have pension plans and health coverage.

In the Netherlands, the legalization of brothels in 2000 led directly to the acceptance of prostitutes into country’s most powerful trade union federation, FNV. Now, Dutch prostitutes who work in brothels are seen as contracted employees of veritable businesses, with no legal discrepancies or informalities remaining.

Even in countries where sex work is legal, progress is often slow. In India, the Karnataka Sex Workers Union has worked for several years to gain recognition as a legitimate trade union, but prostitutes remain deep within the country’s informal, unregulated sector.

In Brazil the inherent linkage between sex work and illegality has led directly to the high level of police and citizen brutality against prostitutes, as well as the stigmatization of the profession. Because pimps pay the police to keep the peace, prostitutes remain unable to report abusive conditions.

And as brothels operate outside of the law’s strictures, regulation of child prostitution and trafficking has also become a pressing issue. According to a study by the ProMundo Institute, sexual exploitation of children and adolescents has risen 58 percent since 2003. Brazil also has the second-worst record on child sex trafficking, surpassed only by Thailand.

Activist argue that as mega-events loom in Brazil’s imminent future — with FIFA’s world cup set to launch in 12 Brazilian cities in 2014, and the 2016 Summer Olympics to take place in Rio de Janeiro — the impending swell of sexual tourism necessitates more robust legislative and unionization opportunities for sex workers.

In the face of systematic rejection from formal unions and amid widespread public stigma, a group of Brazilian sex workers and advocates have galvanized around an intermediary goal of creating NGO-based networks and resources for prostitutes, focusing on achieving basic citizenship and human rights for sex workers themselves rather than through labor unions.

Led by activist and ex-prostitute Gabriela Leite, whose 2009 autobiography Mother, Daughter, Grandmother, Whore has been turned into a Brazilian Broadway play and is currently being produced into a blockbuster film, they’re working to take prostitution out of the shadows of Brazilian society.

These activists look to cultivate an informally unionized body of sex workers who are literate about their rights, who deem themselves worthy of professional status and who are working to fight current stigma against the profession.

When Leite moved to Rio de Janeiro in 1982, she was 32 years old and fell fast in love with Vila Mimosa, the city’s historic red light district. The relentlessly packed streets, at that time set to a samba beat, were hemmed in by the countless cavernous brothels most frequented by Rio’s working class population.

She had initially come to work in the touristic and luxurious Copacabana neighborhood, but one day made her way to the North Zone out of curiosity, trading beachfront and chic restaurants for a small, un-air-conditioned room. She ended up spending the next 12 years living and working in Vila Mimosa.

“I prefer working men, factory workers, taxi and truck drivers,” she said. “Brazilian men from all regions who fight to survive.”

Though the locale has changed and the music has shifted from samba to Brazilian funk, Vila Mimosa still serves as Rio’s iconic red light district, the “girl from Ipanema” for the working-class Brazilian. It also remains emblematic of the vast contradictions plaguing the state of sex work in the country, in which a vastly illegal entity is emblematic of a completely legal profession.

During her years in Vila, Leite became increasingly frustrated with police abuses and the fringe nature of her profession. She has spent her career working at the forefront of the movement to tear prostitution free of its current societal role, working to guarantee human rights for prostitutes and instill in them a sense of professional pride.

She, along with her husband, edits the online journal “Street Kiss,” by and for prostitutes, with a readership of over 20,000.

Leite also founded Daspu — a pun on the Portuguese word for “hooker” — the first fashion line by and for prostitutes. Their goal is not to “take anyone out of prostitution … but to fight for prostitutes’ citizenship, like the right to work for themselves in better conditions, to access public services and other societal goods without discrimination, and for heightened self-esteem.”

In addition to such cultural inroads, Leite founded the nonprofit organization Davida and organized the Network of Brazilian Prostitutes, the first organization to unify sex workers nationwide. In these more official capacities, she has partnered with the Ministry of Health for anti-AIDS campaigns with slogans like, “You have a profession, girl! Don’t be ashamed, so use a condom!”